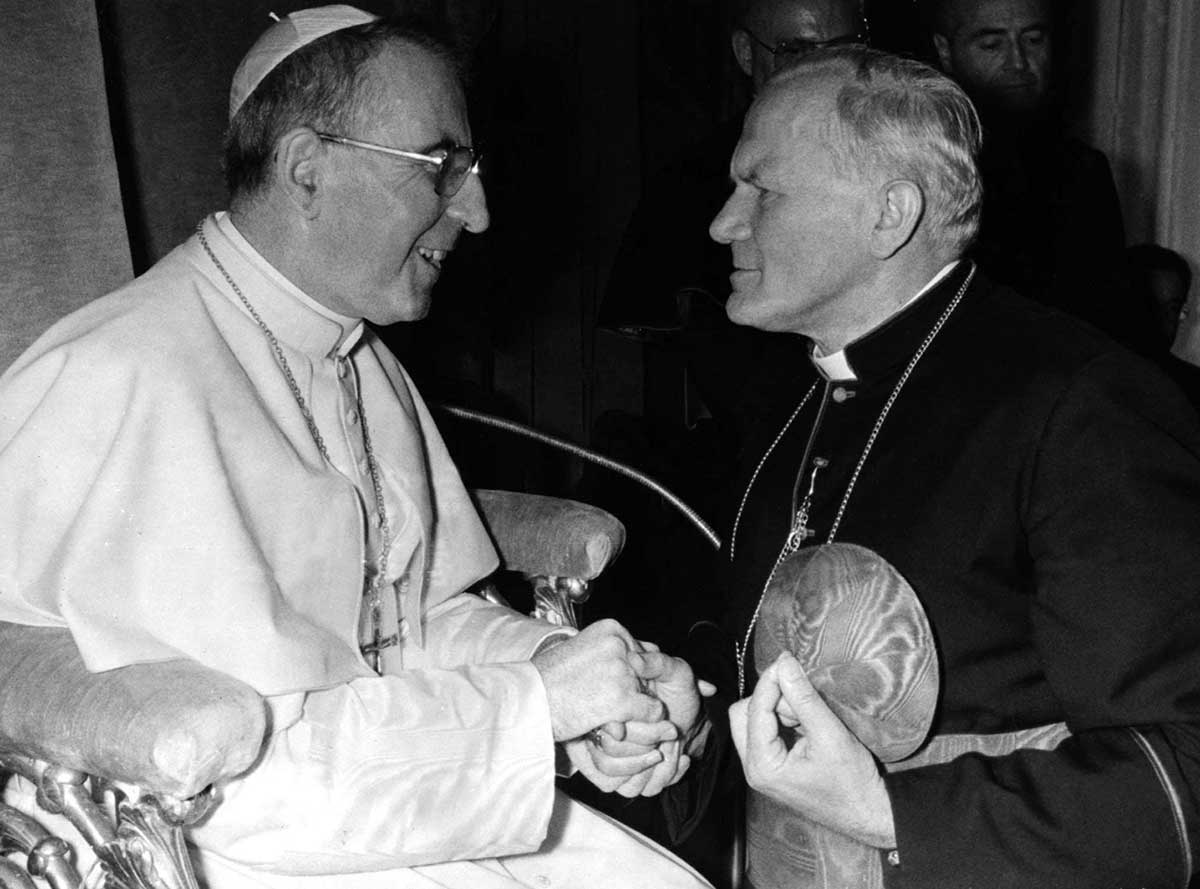 Pope John Paul I meets Cardinal Karol Wojtyla, the future Pope John Paul II, in this 1978 photo. On September 28 the Vatican marked the 42nd anniversary of the death of Pope John Paul I, who died just 34 days after his election. (CNS photo/Vatican Media via Reuters)

By Carol Glatz – Conspiracy theories and dark intrigue about Pope John Paul I’s untimely death just one month after his election should be set aside and his life and legacy made more widely known, said his niece.

“There is a real need instead to look at all of his work, to highlight all of his work, his whole life, all that he was. It cannot all boil down to a legend of the ‘pope who was murdered,'” Lina Petri told Vatican News September 28, the 42nd anniversary of her uncle’s death.

Pope John Paul I was found dead at the age of 65 that September in 1978. He had been elected pope just 34 days before, a few weeks after the death of St Paul VI on August 6.

The sudden death of “the smiling pope” inspired a number of conspiracy theories and presumptions, while interviews with witnesses and documents found in the Vatican archives by Stefania Falasca, a journalist and vice postulator of Pope John Paul’s sainthood cause, confirm the pope died of a heart attack during the night of September 28.

“So, there is no reason for all this conspiracy that unfortunately overshadowed who my uncle was, his being a shepherd, his being pope, even if for only 34 days,” Petri said.

She praised the recent establishment of the John Paul I Vatican Foundation to preserve and promote his writings, thinking, example and study. Petri is one of the six members of the foundation’s administrative board.

“I think the usefulness of this foundation is precisely to try avoiding putting the spotlight only on my uncle’s last night – a situation that has generated so much ‘fake-news’, so much nonsense that has been said and is still said today,” she said.

Mauro Velati, a member of the foundation’s scientific committee, told Vatican News that there is much to look at and learn from the huge number of articles and speeches written by Pope John Paul.

“He published such an unusually large number of articles, we could define him as ‘a journalist bishop,’ and perhaps it is there that people can truly see what he wanted to contribute to the life of the church,” he said.

Pope John Paul saw his ministry as an opportunity to take advantage of his ability to share and explain what the church teaches “and, in fact, his catecheses were an important part of his pastoral action,” Velati said.

Having attended all the sessions of the Second Vatican Council, that “historical moment created a great change in him, a change in his vision of the church,” he said.

The pope tried to bring what the faith teaches to the current reality of the moment or situation, he said.

“He wasn’t thinking of an ‘update’ that would turn upside down traditional types of doctrine, but that he would rethink them in order to speak to people by using simple language, a language close to the people and using ‘the language of love.'”