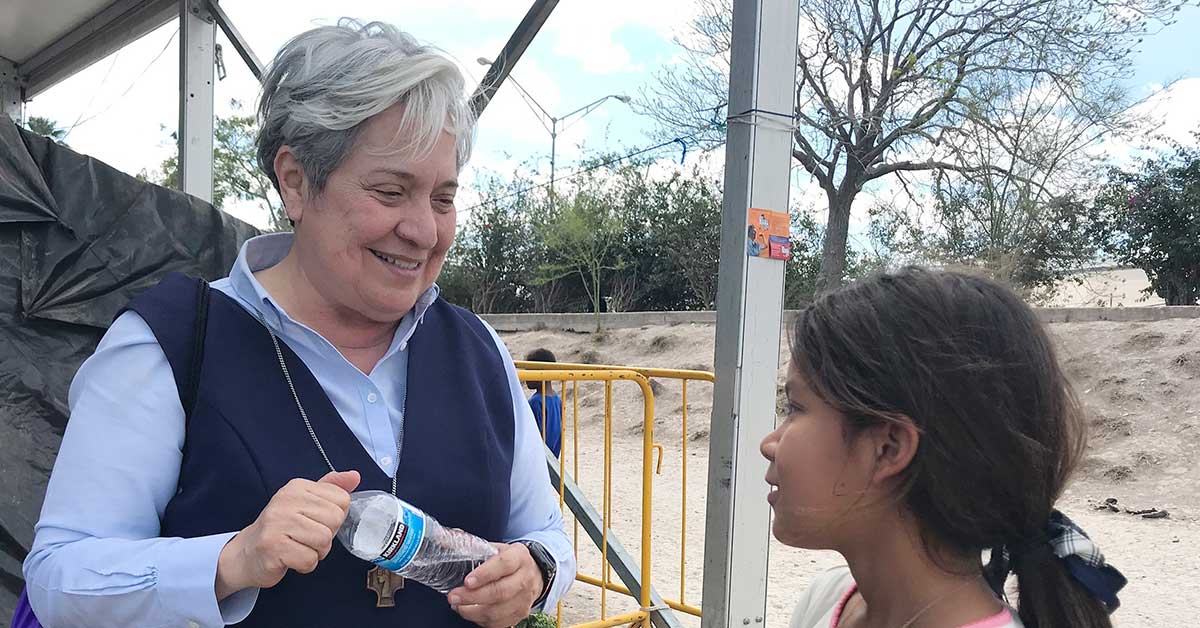 Sister Norma Pimentel, director of Catholic Charities of the Rio Grande Valley in Texas, speaks with a young resident of a tent camp in Matamoros, Mexico. (CNS photo/David Agren)

By Carol Zimmermann – Sister Norma Pimentel, a Missionary of Jesus and executive director of Catholic Charities of the Rio Grande Valley, has received numerous awards over the years for her work in Texas with migrants along the US-Mexican border, and she can now add a new title to her list: one of Time magazine’s 100 most influential people in the world.

In a Facebook message about the honour, she gave credit to all those who work with her in the Diocese of Brownsville, Texas, “restoring human dignity to those in need.”

“It is a recognition of the generosity of the people of the Rio Grande Valley and from throughout the United States. Together we recognise that we have a responsibility. We are a people of God, people driven by the presence of God in ourselves and in others. When we see human suffering, we cannot turn our backs, we must respond,” she said.

And she hopes that her name, in the magazine among athletes, politicians, activists and entertainers, will “bring more understanding and help people see more clearly what we can each do to respect all human life, especially the most vulnerable.”

In 2015, Pope Francis personally thanked Sister Pimentel for her work with immigrants in a virtual town hall meeting featured on ABC’s “20/20.” That same year she was named one of Our Sunday Visitor‘s 2015 Catholics of the Year and won a nomination for “Texan of the Year.”

Last year, after being presented with the Sister Margaret Cafferty Development of Peoples Award from the U.S. bishops’ Catholic Campaign for Human Development, Sister Pimentel, who also has received the University of Notre Dame’s prestigious Laetare Medal and Catholic Charities USA’s “Keep the Dream Alive” award, credited prayer with keeping her grounded.

“It’s key for who I am today and what I do,” she said, adding that if she “didn’t make the time to wake up early in the morning to go to Mass and do my prayers and end with my prayers at night, I think I would get lost in all of this. It would be all about me and all the sensational attention that is given to me.”

For the past three decades, Sister Pimentel has been supporting more than 100,000 migrants seeking refuge in the U.S. along Texas’ border with Mexico with emergency food, shelter, housing assistance, clinical counselling and pregnancy care.

The magazine’s tribute to her, written by Julián Castro, former US secretary of Housing and Urban Development, said that her work has “taken on greater importance in the era of Donald Trump, and for good reason.”

He also said her “boundless hope and fearless compassion have earned her the moniker of ‘the pope’s favourite nun'” and she will “keep changing the world, one act of kindness at a time.”

As a daughter of Mexican immigrants, Sister Pimentel frequently crossed the border back and forth from Brownsville to Matamoros, Mexico, to be with family on both sides of the border. She was born in Texas while her parents were awaiting a response from U.S. authorities on their application for residency.

In her reflection on immigrants in the book “A Pope Francis Lexicon,” she wrote: “I am a U.S. citizen by ‘chiripa’ – sheer chance,” noting that she grew up in two countries, Mexico and the United States.

This summer, in an opinion piece in The Washington Post, Sister Pimentel made a public plea for people not to forget the plight of asylum-seekers during the coronavirus pandemic.

“Our camp is a makeshift ‘tent city’ filled with about 1,500 vulnerable women, men and children awaiting rulings on their applications for asylum in the United States. These families are living in donated tents at the mercy of extreme weather,” she said.

She urged readers to imagine “living in such uncertainty, where even such basics as running water and a place to shower are nonexistent; where you have to depend on outside organisations for food, which you have to cook over a campfire.”

“Like the prisons and nursing homes that have been breeding grounds for the virus in the United States,” Sister Pimentel said, “the camp is crowded with people who for now are not going anywhere.”