What’s Next for The Southern Cross? 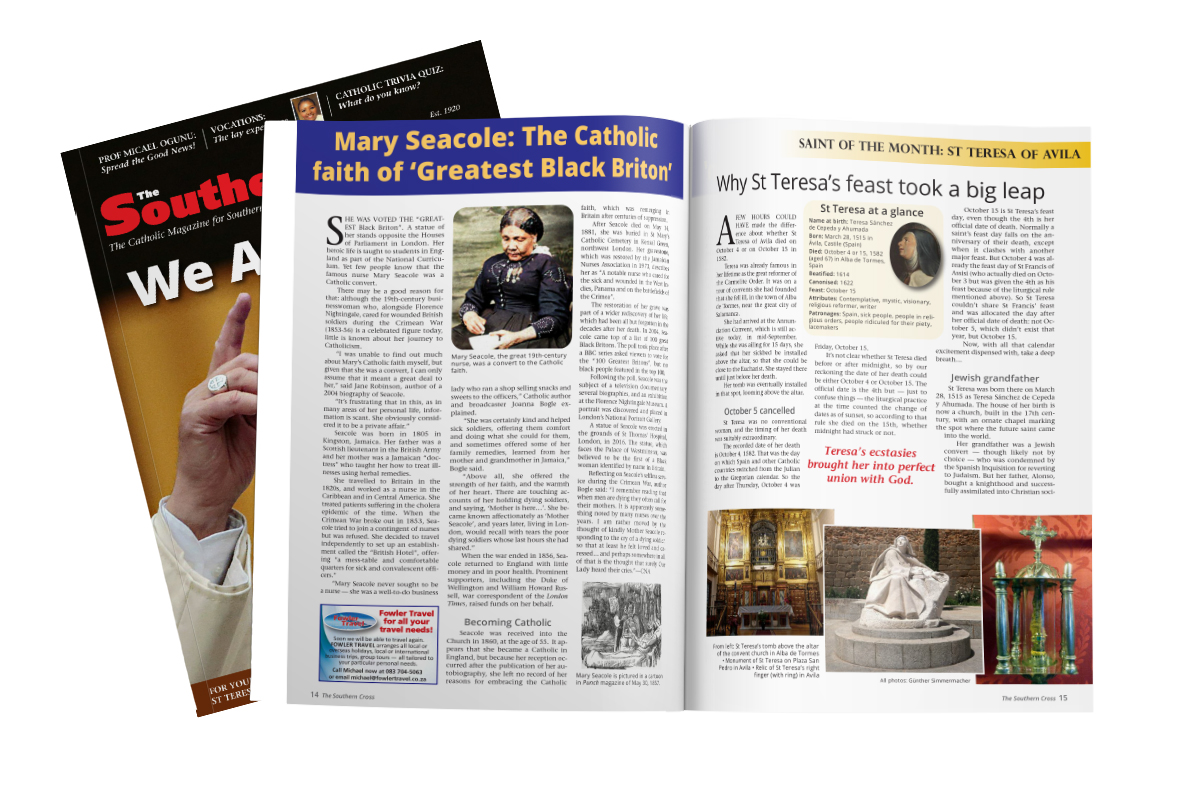 Next week the final edition of The Southern Cross as a weekly newspaper will appear, in digital format only, as it has been since lockdown began almost six months ago. By then, the newly-launched monthly magazine, also under the title The Southern Cross, will be in distribution. Here editor GÜNTHER SIMMERMACHER answers some of the questions that have been put to us.

Why was it necessary to discontinue the weekly newspaper?

The coronavirus lockdown was the final nail in the coffin. We lost virtually all of our points of sale in one swoop when the churches closed. That was our main source of income gone.

But that income had been diminishing before, so we had already considered transitioning to a magazine, which is a form of media that’s more viable than a newspaper.

But for us, all these plans were a matter for the future, to be tackled in 2021, after our centenary. Lockdown accelerated that step.

A monthly magazine is great, but where are we going to get our Catholic news?

The Southern Cross website will continue to meet the mandate to deliver news to the Catholic community.

So we encourage people to send in news, and for religious orders and dioceses to provide obituaries of the faithful servants who have passed away.

Our website is wonderfully active and has a huge archive. One can really spend quality time there.

What can we expect from The Southern Cross magazine?

We use an alliterative wordplay to define our approach: “Edify, Educate, Entertain.”

We’ll have articles that give insights into our faith, and build us up as Catholics, but also fun stuff like the trivia quiz, crossword and wordsearch.

One special feature will be the “Saint of the Month”, with a pullout poster. The saint in the October issue is St Teresa of Avila. In November it will be St Martin de Porres.

Another feature we expect to be popular is the Q&A section. In a survey we conducted online, that was a request that came up frequently. We have a team of experts in various fields who will answer readers’ questions on matters of faith.

Readers might find our “Ten Ways to be a Happy Catholic” helpful, and collect the illustrated prayers. One of my personal favourites is the monthly colourised historical photo. In the first issue, it is of the three visionary children of Fatima.

We have retained some popular columnists, but are also introducing lots of new things.

Hopefully, readers will give us feedback about what they liked, and what they didn’t.

Have you done any market research?

We conducted an online survey which gave us a lot of ideas about what will work well, and also some great ideas about content for the future.

What was interesting is that our readership is younger than we had expected. Most respondents were between 34 and 54, and a good proportion were younger.

We know that surveys like that aren’t scientific — in fact, there is no such thing as a scientific survey — but it gave us some very helpful pointers. So thank you to all those who took the time to respond — even the chap who took the opportunity to issue pretty nasty insults.

Sounds great. How can I get the Southern Cross magazine?

The new magazine will be available from most parishes and directly from The Southern Cross at a cover price of R30.

If your parish doesn’t stock it, ask your priest or PPC to please do so.

One priest said he won’t stock the magazine because he doesn’t know whether his parishioners will like it. But how will he know when he doesn’t give them a chance to decide whether they do or don’t like it?

There cannot be any doubt that in every community there will be some people who will like a Catholic magazine. Some of them just need a bit of encouragement.

And if the parish doesn’t stock the magazine or is sold out?

Again, speak to the priest and ask for more copies to be ordered for sale.

Alternatively you can subscribe—we have a great offer on print/digital hybrid combos.

And we offer to fill one-off orders for one edition. That’s R30 plus R12 p&p. But if you order in bulk of up to 11 copies with friends, you can save on the postage.

What can be done to help The Southern Cross?

Promote us! Talk about The Southern Cross. Encourage others. Post photos of yourself reading the magazine on social media—and send those to us. Shout it from the rooftops!

Parishes can promote The Southern Cross through their social media and other forms of communication.

Contact the housebound and those who are self-isolating and ask them if they would like to read the new Catholic magazine.

But many parishes are also struggling financially…

Stocking The Southern Cross is risk-free. Parishes pay only for the copies they’ve sold.

And the advantage with a monthly, there are four weeks to sell the magazine — and order more when you run out of stock.

And if you don’t get support?

If we don’t get support immediately, with this first issue, we’ll be in deeper trouble.

For so long, The Southern Cross was taken for granted, like it would always be there. Now we have lost the weekly, and if the three of us freelancers had decided not to make sacrifices to keep it going, we would have lost The Southern Cross forever. And what would replace it?

So the parishes are key to keeping The Southern Cross alive?

Absolutely. This means that we need parishes to promote the magazine, especially now, when restrictions still apply.

One way of doing so is for parishes to appoint a sodality or a ministry in the parish, such as the ushers, to take on The Southern Cross as a project.

We offer an incentive of R5 commission per copy sold, but it’s about more than that. We must promote Catholic media as a way of getting the Church into people’s homes.

But you have had some support?

My colleagues and I have been sustained by the support and prayers of many people during a difficult time. There’s lots of goodwill out there, lots of love for The Southern Cross.

We saw that when people started to spontaneously collect funds to keep us alive, and that has helped financially, but also morally. Every donation we receive, whether it’s R100 or R10 000, tells us, “Carry on, your work is important and valued.” That gives us strength and hope — and it invests us with a responsibility to produce a first-class publication.

I hope we meet that obligation.

Subscribe to The Southern Cross magazine at www.digital.scross.co.za/subscribe. To order individual copies or for parish orders, e-mail Pamela at admin@scross.co.za or phone 083 233-1956