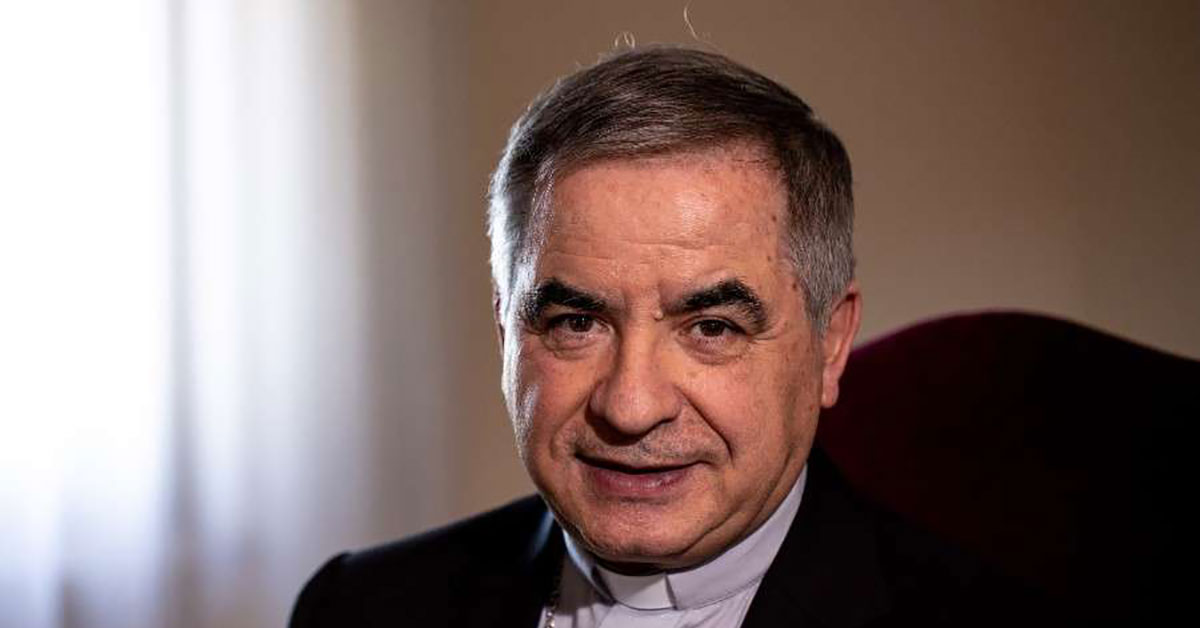 By CNA – Italian media have reported allegations that former Cardinal Angelo Becciu transferred several hundred thousand euros from Vatican accounts to an account in Australia during the trial of Cardinal George Pell.

The cardinal has not responded to the allegation, which CNA has not independently corroborated.

Italian newspaper Corriere della Sera reported Friday that the alleged transfer is part of a dossier of evidence being compiled by Vatican investigators and prosecutors against the cardinal, who was forced to resign by Pope Francis on Sept. 24.

According to the Italian newspaper Il Messaggero, the allegations were made by Msg Albert Perlasca, Becciu’s former chief deputy at the Secretariat of State. Perlasca and Becciu worked together for several years overseeing aspects of curial governance, including the investment Vatican finances.

Perlasca is believed to be cooperating with Vatican prosecutors as part of an ongoing investigation into financial misconduct at the Secretariat of State over a period of years.

Il Messagaro reported on Friday that, in discussions with Vatican prosecutors, Perlasca accused Becciu of transferring 700,000 euros from a Vatican account to an Australian account during the course of Pell’s trail in Victoria on charges of child sexual abuse. The paper did not specify when Perlasca first made the accusation, did not give a precise date for the alleged transfer, and did not indicate to whom the account in Australia was supposed to belong.

CNA has not confirmed the substance of the accusation, which is likely to make global headlines after years of speculation by supporters of Pell that the timing of sexual abuse allegations against him was linked to efforts to oppose his reform of Vatican finances.

Perlasca worked as the head of the administrative office from 2009 until July 2019, when Pope Francis appointed him Promoter of Justice at the Supreme Tribunal of the Apostolic Signature; chief prosecutor of the Church’s highest ecclesiastical court. Becciu served as sostituto, the second most senior position in the secretariat, from 20012-2018, when he was promoted to lead the Congregation for the Causes of Saints and made a cardinal.

In February, Perlasca’s home and office were raided by investigators over his participation in the Vatican’s investment of hundreds of millions of euros with the Italian financier Raffaele Mincione.

On September 24, Cardinal Becciu was ordered to resign from his role at the Congregation for the Causes of Saints and the rights and privileges of a cardinal, after Pope Francis was presented with evidence of serial financial misconduct by Becciu.

Becciu’s resignation followed more than a year of reporting by CNA and other news outlets on various financial scandals involving Becciu and the Holy See’s Secretariat of State. Many of those reports stemmed from the secretariat’s controversial investments through Mincione, including the purchase from him of a London property for hundreds of millions of dollars.

Becciu has maintained he is innocent of any wrongdoing.

Cardinal Pell served as the first prefect for the Secretariat of the Economy in the Vatican, a department created by Pope Francis in 2014 to bring coherence and transparency to the administration of curial finances.

In 2017, Pell took a leave of absence from that role to return to Australia where he stood trial on accusations of sexual abuse brought by a single alleged victim. After spending more than a year in prison, Pell was vindicated by the Australian High Court earlier this year.

During his time at the Secretariat of State, Becciu was known to have a strained relationship with Cardinal Pell. CNA has reported that the two cardinals clashed repeatedly over Pell’s attempts to reform Vatican finances and to institute reforms ordered by Pope Francis.

CNA has reported that in 2015 Becciu seemed to have made an attempt to disguise the loans on Vatican balance sheets by cancelling them out against the value of the property purchased in the London neighbourhood of Chelsea, an accounting manoeuvre prohibited by new financial policies approved by Pope Francis in 2014.

The alleged attempt to hide the loans off-books was detected by the Prefecture for the Economy, then led by Pell. Senior officials at the Prefecture for the Economy told CNA that when Pell began to demand details of the loans, especially those involving the Swiss banks Credit Suisse and BSI, then-Archbishop Becciu called the cardinal into the Secretariat of State for a “reprimand.”

In 2016, Becciu was instrumental in bringing to a halt reforms initiated by Pell. Although Pope Francis had given the newly created Prefecture for the Economy autonomous oversight authority over Vatican finances, Becciu interfered when the prefecture planned an external audit of all Vatican departments, to be conducted by the firm PriceWaterhouseCooper.

Unilaterally, and without permission of Pope Francis, Becciu cancelled the audit and announced in a letter to all Vatican departments that it would not take place.

Becciu was also responsible for the 2017 “resignation” of the first Vatican auditor general, Libero Milone.

Milone was fired in dramatic fashion by Becciu, who accused the auditor of “spying” on the finances of senior officials, including Becciu. The then-Archbishop Becciu threatened criminal prosecution of Milone if he did not agree to leave his Vatican office quietly.

Milone maintained that he was fired for being too good at his job, and because he and the reforming work of the Prefecture for the Economy were perceived as a threat to the autonomy and business practices of long-time curial officials. Milone said that he was dismissed on trumped-up charges after he uncovered evidence of financial misconduct under Becciu’s leadership. – CNA

The Terrorist Threat and Immigration Debate