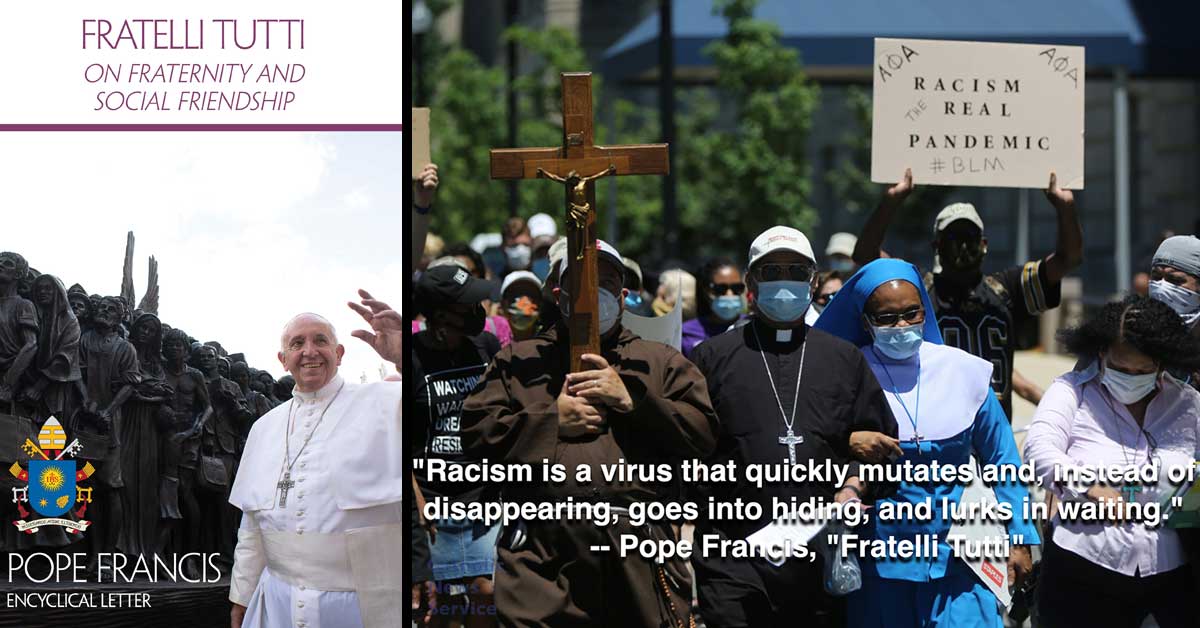 By Cindy Wooden –  Calling all people of goodwill to care for one another as brothers and sisters, Pope Francis urged people not to despair of making the world a better place, but to start creating the world they want through personal action and political lobbying.

Pope Francis signed his new social encyclical, “Fratelli Tutti, on Fraternity and Social Friendship,” at the end of Mass October 3 in Assisi. The Vatican released the text the following day.

“A worldwide tragedy like the Covid-19 pandemic momentarily revived the sense that we are a global community, all in the same boat, where one person’s problems are the problems of all,” the pope said. “Once more we realised that no one is saved alone; we can only be saved together.”

At the same time, he said, responses to the pandemic, and especially to its economic devastation, shined a light on the inequalities existing within nations and among nations.

“For all our hyperconnectivity, we witnessed a fragmentation that made it more difficult to resolve problems that affect us all,” he said. “Anyone who thinks that the only lesson to be learned was the need to improve what we were already doing, or to refine existing systems and regulations, is denying reality.”

That flavour, explained throughout the document, involves welcoming the stranger, feeding the hungry, listening to and giving a hand up to the poor, defending the rights of all and ensuring that each person, at every stage of life, is valued and invited to contribute to the community, he said. It also means supporting public policies that do so on a larger scale.

At the heart of the new encyclical’s appeal to Catholics is a meditation on Jesus’ parable of the good Samaritan and particularly on how Jesus takes a legal scholar’s question, “Who is my neighbour,” and turns it into a lesson on being called not to identify one’s neighbours but to become a neighbour to all, especially those most in need of aid.

“The parable eloquently presents the basic decision we need to make in order to rebuild our wounded world. In the face of so much pain and suffering, our only course is to imitate the good Samaritan,” he said. “Any other decision would make us either one of the robbers or one of those who walked by without showing compassion for the sufferings of the man on the roadside.”

“The parable,” he continued, “shows us how a community can be rebuilt by men and women who identify with the vulnerability of others, who reject the creation of a society of exclusion, and act instead as neighbours, lifting up and rehabilitating the fallen for the sake of the common good.”

Doing that, he said, would mean recognising and taking concrete action against “certain trends in our world that hinder the development of universal fraternity” and acting as a neighbour to one another, including racism, extremism, “aggressive nationalism,” closing borders to migrants and refugees, polarisation, politics as a power grab rather than a service to the common good, mistreatment of women, modern slavery and economic policies that allow the rich to get richer but do not create jobs and do not help the poor.

Read the full text of the encyclical