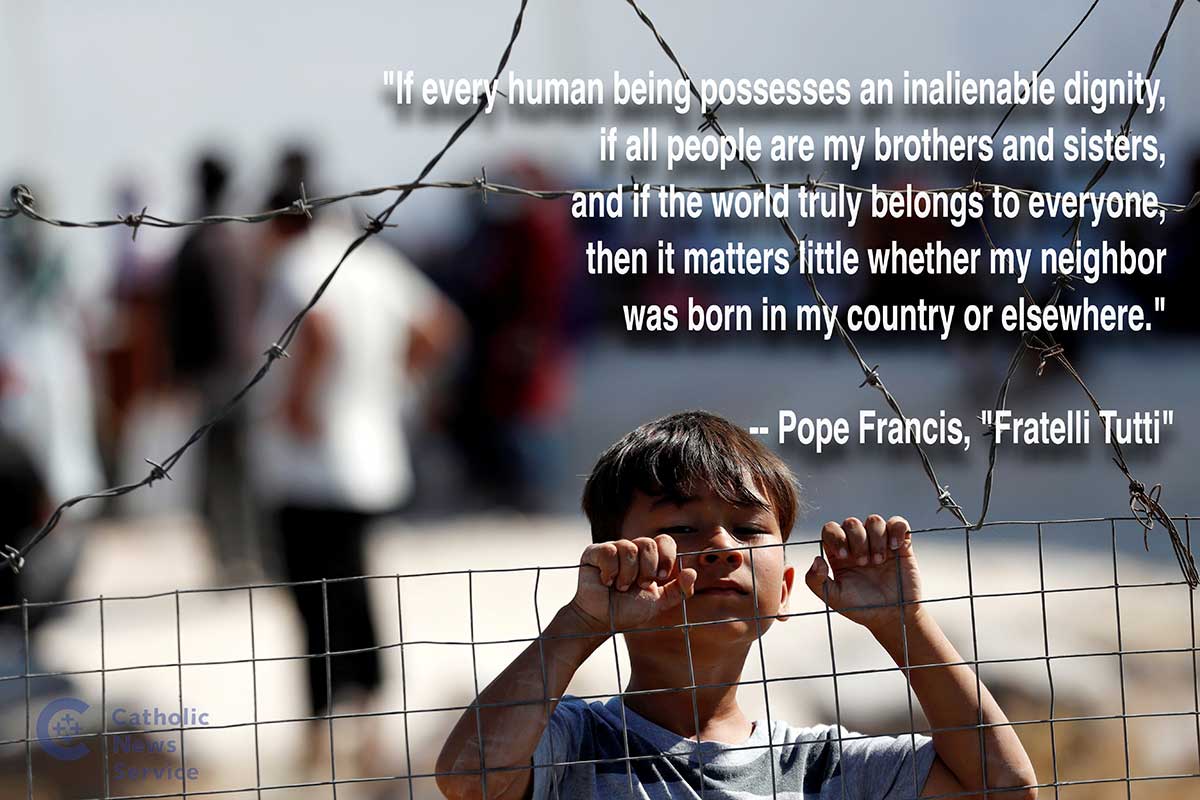 This is a quote from Pope Francis’ new encyclical, “Fratelli Tutti, on Fraternity and Social Friendship.” (CNS illustration/photo by Yara Nardi, Reuters)

Pope Francis signed the encyclical Fratelli Tutti on October 3 after celebrating Mass at the tomb of St Francis of Assisi, and the Vatican released the more than 40,000-word text the next day.

People who think politics is sinking to new lows may find comfort in knowing Pope Francis also is concerned about the debasement of what church teaching has described as a “lofty vocation.”

“Political life no longer has to do with healthy debates about long-term plans to improve people’s lives and to advance the common good, but only with slick marketing techniques primarily aimed at discrediting others. In this craven exchange of charges and countercharges, debate degenerates into a permanent state of disagreement and confrontation,” the pope wrote in his new encyclical.

The encyclical urges Christians and all people of goodwill to recognise the equal dignity of all people and to work together to build a world where people love and care for one another as brothers and sisters.

Building that world, he insisted, requires “encounter and dialogue,” processes that allow people to speak from their experience and culture, to listen to one another, learn from one another and find ways to work together for the common good.

Calling all people of goodwill to care for one another as brothers and sisters, Pope Francis urged people not to despair of making the world a better place, but to start creating the world they want through personal action and political lobbying.

“A worldwide tragedy like the Covid-19 pandemic momentarily revived the sense that we are a global community, all in the same boat, where one person’s problems are the problems of all,” the pope said. “Once more we realised that no one is saved alone; we can only be saved together.”

At the same time, he said, responses to the pandemic, and especially to its economic devastation, shone a light on the inequalities existing within nations and among nations. “Fratelli Tutti”, which literally means “all brothers and sisters” or “all brothers,” are the words with which St Francis “addressed his brothers and sisters and proposed to them a way of life marked by the flavour of the Gospel,” the pope wrote.

Belief in God as the creator of all has practical consequences

Professing faith in God as the creator of all human beings, or even simply recognising that all people possess an inherent dignity, has concrete consequences for how people should treat one another and make decisions in politics, economics and social life, Pope Francis wrote. “Human beings have the same inviolable dignity in every age of history and no one can consider himself or herself authorised by particular situations to deny this conviction or to act against it,” the pope wrote.

Read the full text of the encyclical 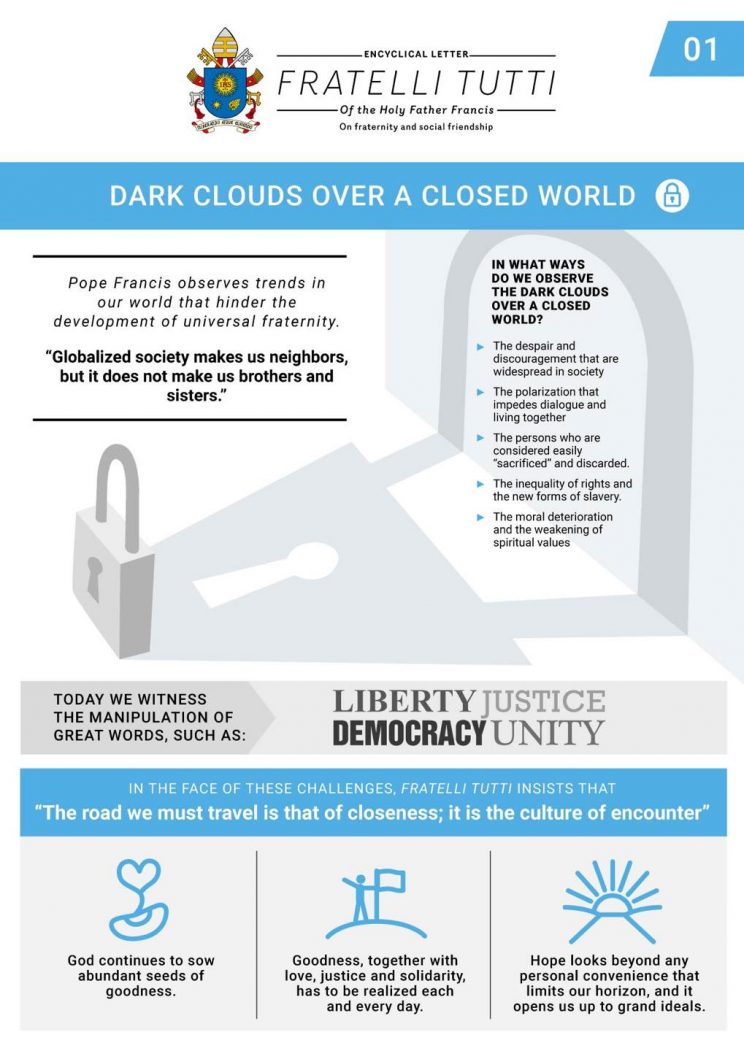 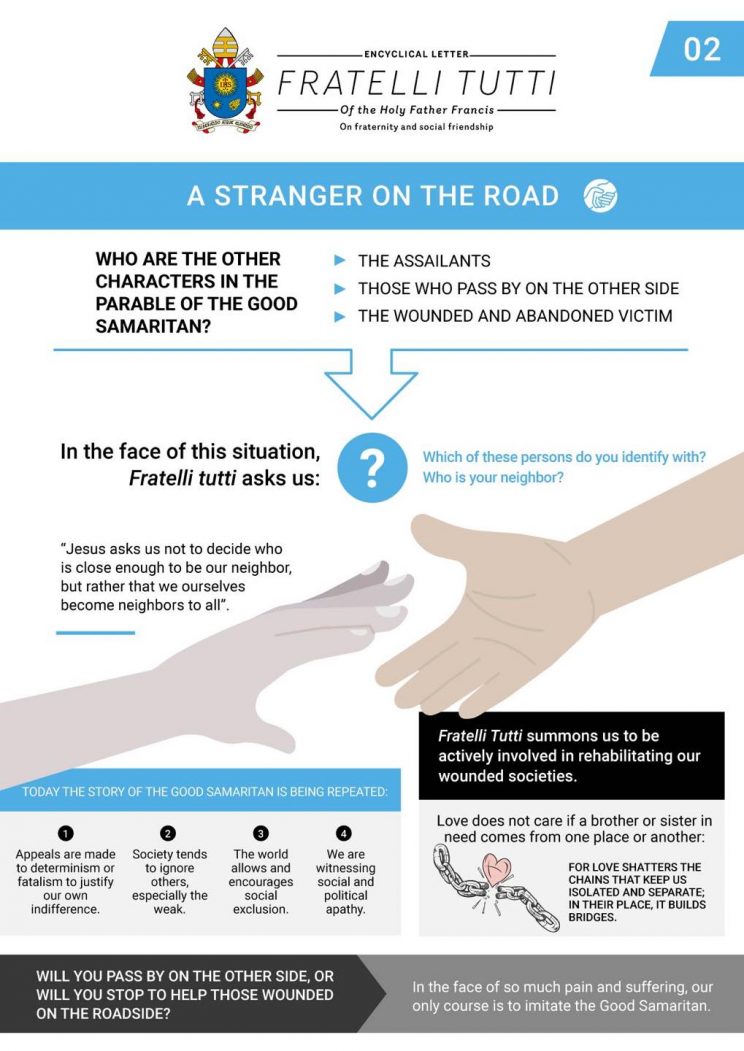 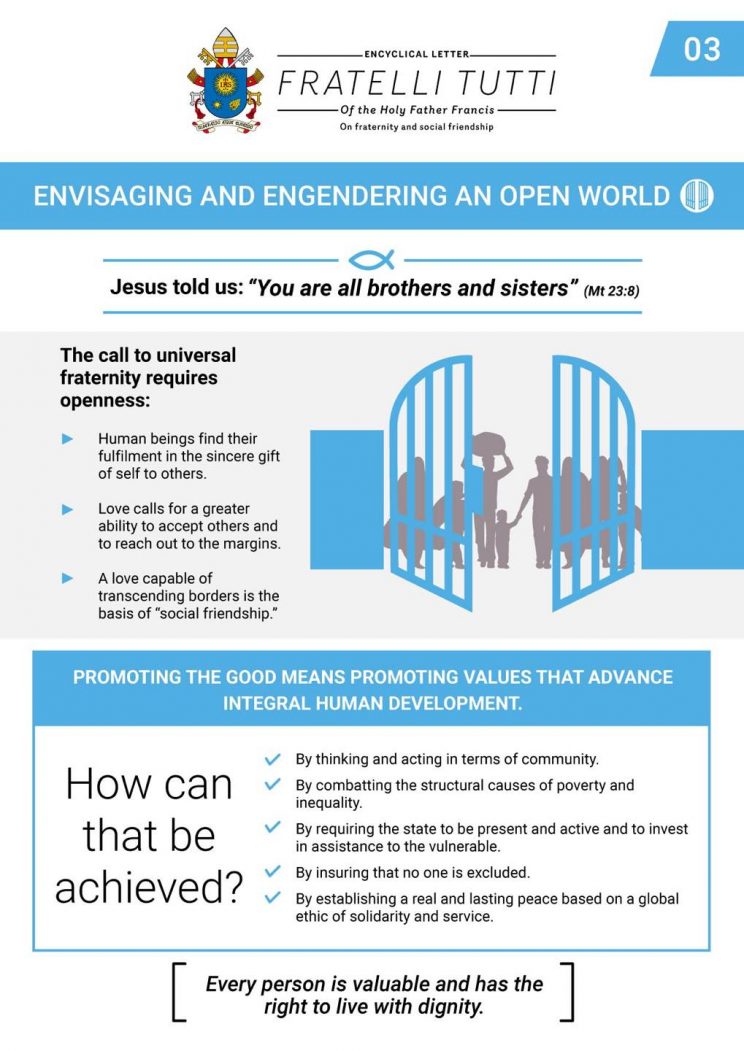 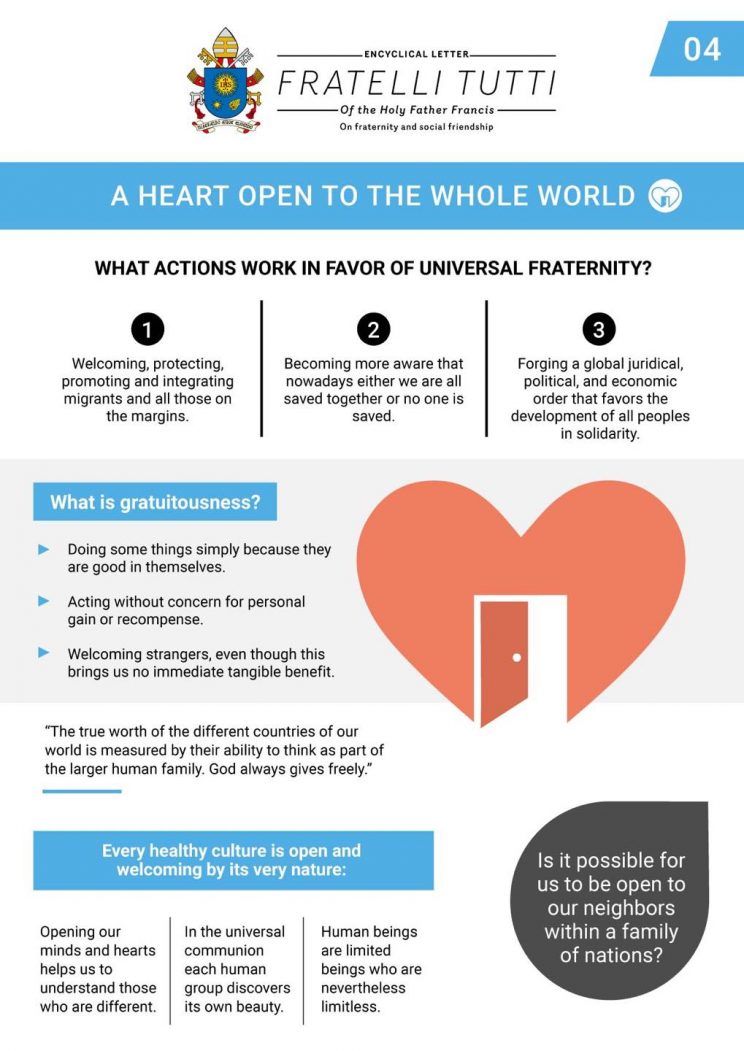 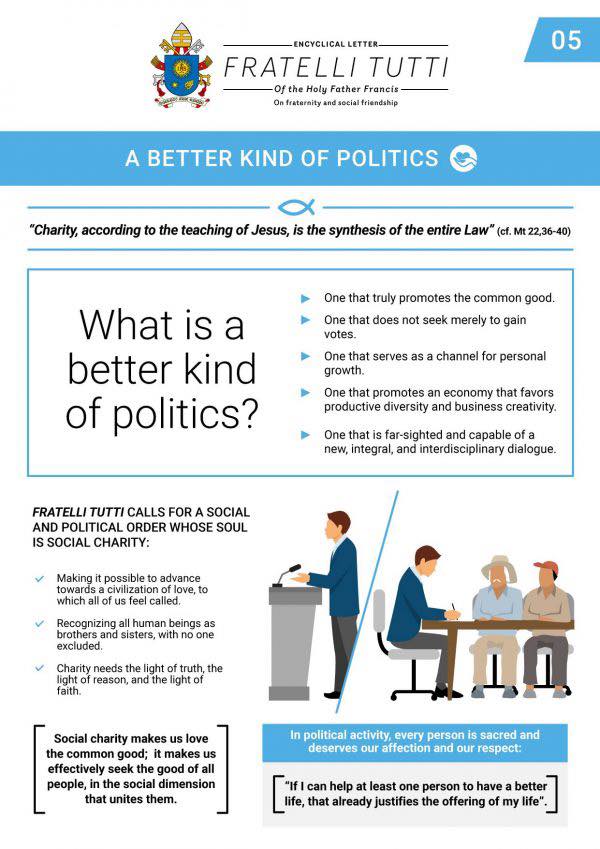 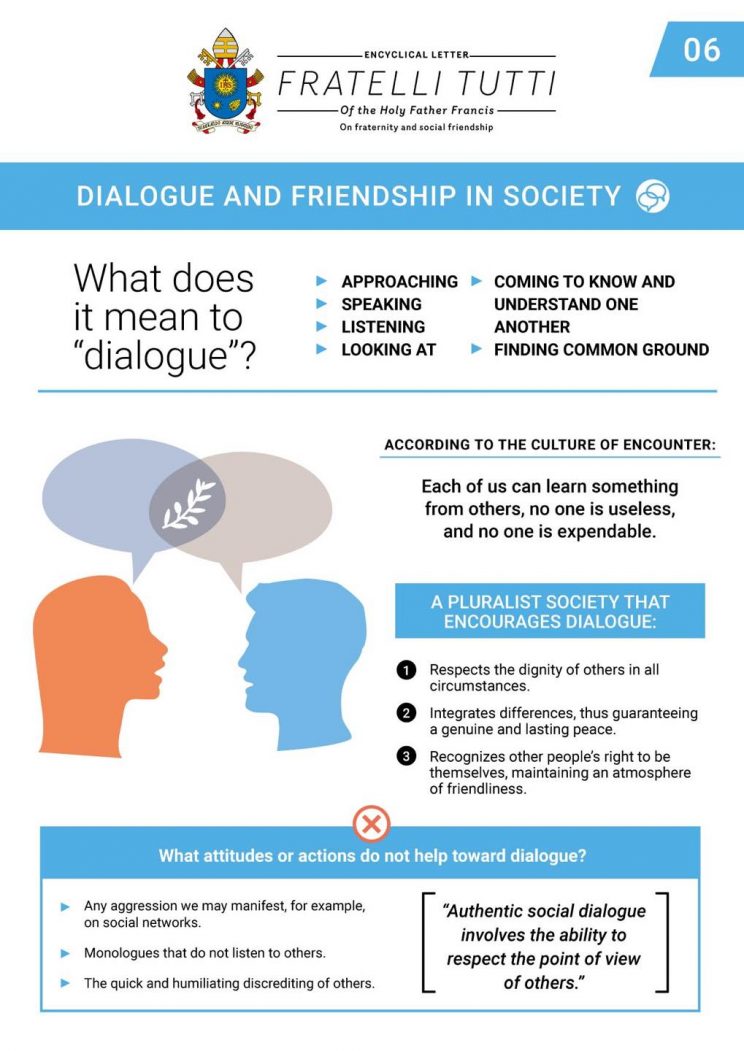 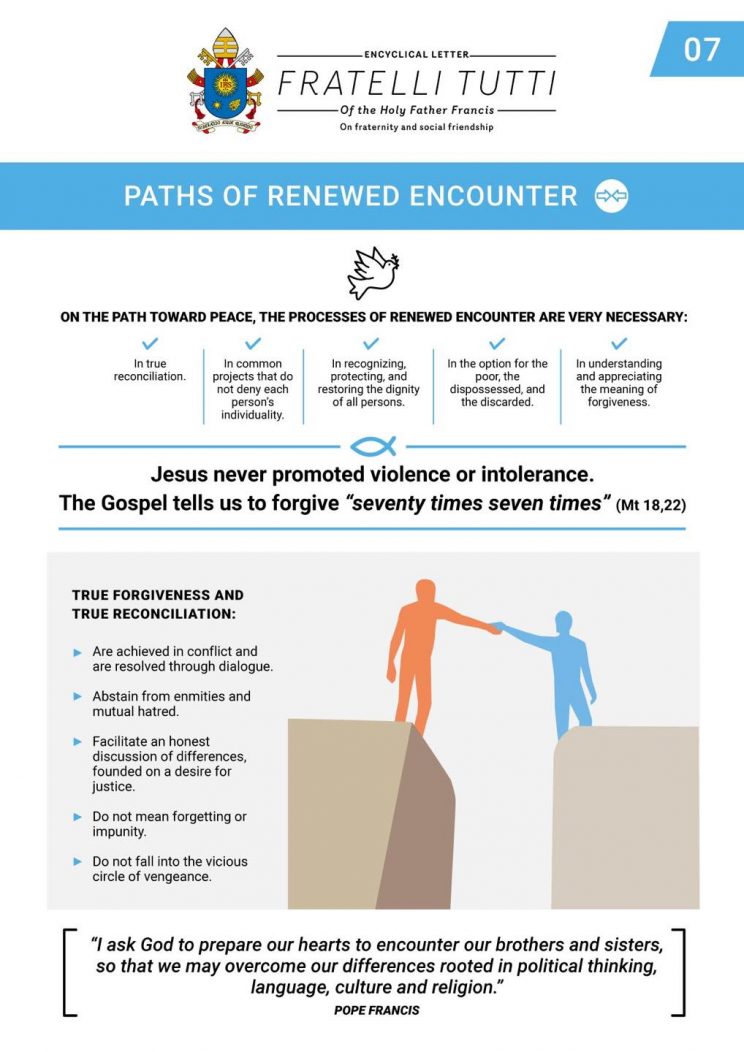 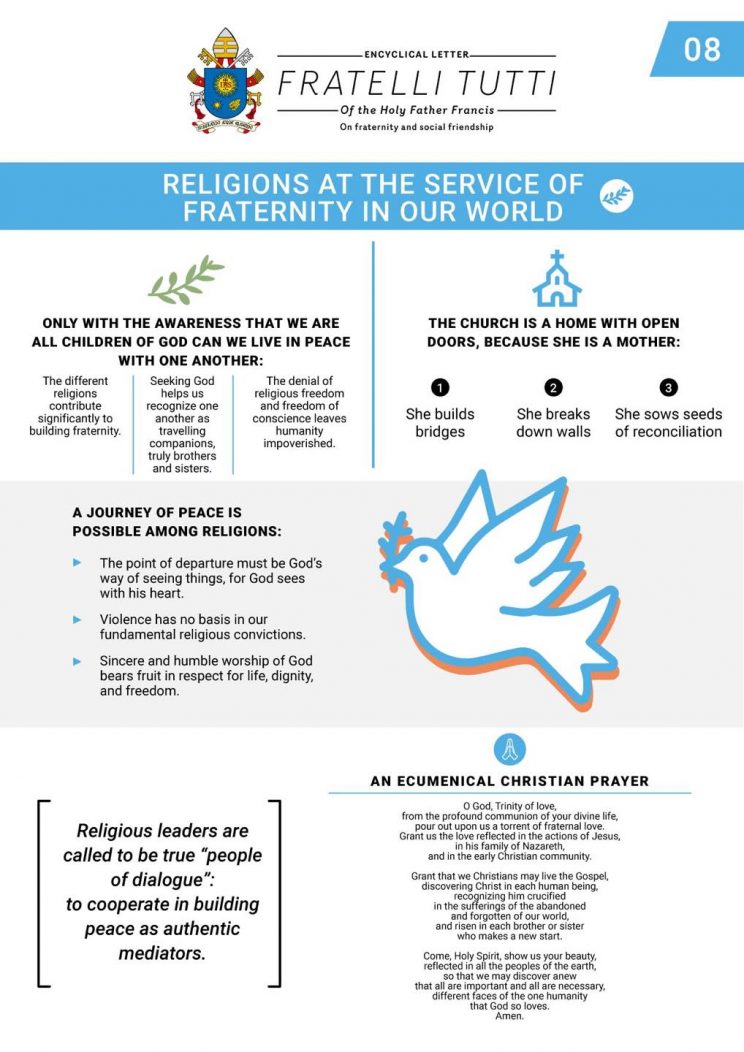