To Live Well Is To Change Often 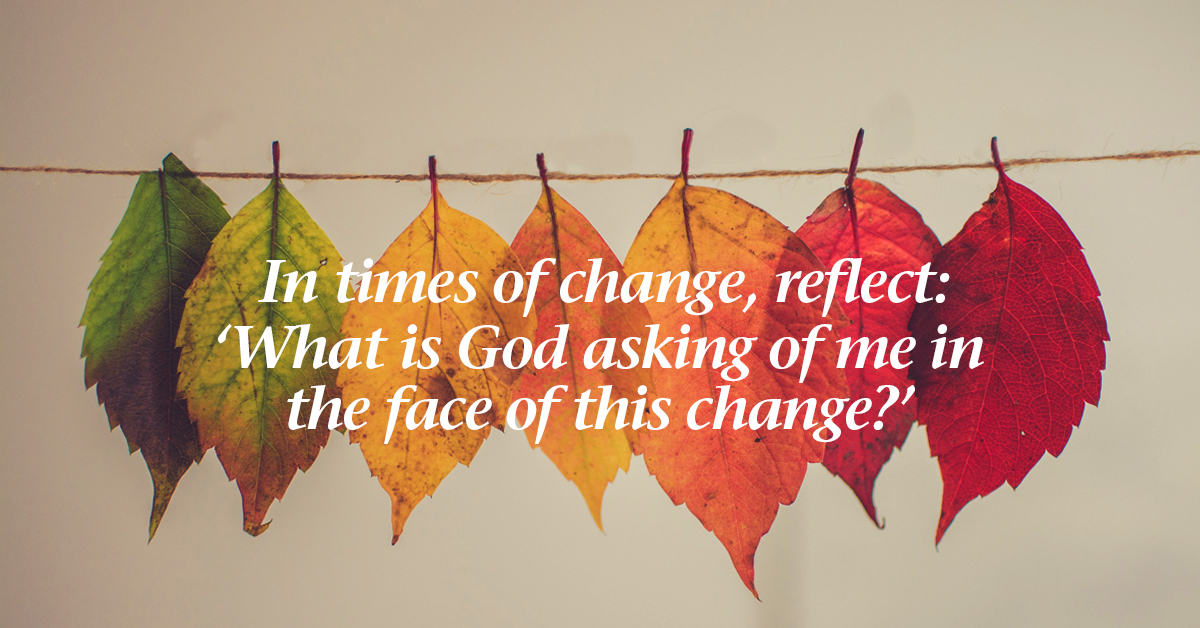 In the last few weeks we have all started to get used to changes in our lives: what we are now becoming accustomed to call “the new normal”. We have seen this in workplaces, schools, gyms and in our churches as we have returned to in-person services, within the prescribed restrictions, for the first time in over five months.

That phrase “the new normal” is worth reflecting on: things are indeed “new”, but they are also now becoming “normal”.

Few of us are good with change: even changes for the better are hard because they take more effort than simply continuing with the ways things were. When the change is not immediately for the better — or, at least, means losing things we have cherished in the past — the effort feels disproportionately burdensome.

I fear that as Catholics we can be especially change-resistant. A lot of our self-identity as a religious community comes from the notion of unchanging continuity (in contrast, we might argue, to those who introduce changes called “reforms”). We do what we do because it has always been that way.

Of course, it does not take much investigation into Church history to discover how many of our cherished “unchanging traditions” are not eternal at all: mandatory clerical celibacy (900 years), the rosary (at most 700 years), the image of the Sacred Heart (350 years), calling a priest “Father” (200 years), Vatican appointment of bishops (just over 100 years).

Indeed, the greatest change experienced in the lifetime of some readers — the move from the old-rite Latin Mass — is presented by some as the abandonment of an ancient tradition. But by its very definition, the Tridentine Mass dates only from the Council of Trent (450 years ago) and, in fact, replaced some much more ancient Mass texts.

This is not to say that these aspects of Catholicism are not good because they are not eternal; but rather to query whether what is oldest is necessarily the best or the most authentic.

God is the God of change

Change is often associated with the negative. A Jesuit friend of mine, when faced with any minor modification to his orderly way of life, would intone mournfully: “Change and decay in all around I see.” You might recognise those words, and complete the quotation with the line that follows: “Oh God, who changes not, abide with me.”

This can be mistakenly justified as a basis for our aversion to change: that if God does not change, then all change must be un-godly. However, this is rather hard to back up theologically. God could have created a world which does not involve change — a planet of tectonic plates that never move. But God chose not to do that. Every aspect of God’s creation is full of change (even those tectonic plates, albeit very slowly).

And we, as human beings who are made in the image and likeness of God and whom God proclaims to be not just good but “very good”, live lives which have change hardwired into us. The time from conception to birth, through puberty and maturing, to aging and death, is a remorseless passage of change — not in spite of God but because, we must assume, God wanted it that way.

St John Henry Newman captured this in a challenging quote: “Whilst in another world it might be different, to live in this world is to change; and to live well is to have changed often.”

We begin to understand the reason for that when we recognise that, while sometimes it is “change and decay”, more often we are given the chance of “change and growth”. Would we really be the same extraordinary creatures of God if we were born fully grown, already knowing all we need to know? Not even Jesus of Nazareth was born in that way. The process of growing up and the change that comes with it makes us what God designed us to be. Recall the famous quote of (another Jesuit!) Teilhard de Chardin: “We are not human beings having a spiritual experience. We are spiritual beings having a human experience.”

Sometimes we can anticipate changes: we mature, we leave home, we marry, we have children, our children grow up, we see our parents die. But even those changes are not always as expected or happen at the times we expect them. Sometimes — out of a spirit of adventure or folly — we create change: I count that I have lived in nine different homes in six cities over the past 21 years. Sometimes change happens to me when it seems everyone else’s life is stable: an illness, or a death, or falling in or out of love.

And then there is the change we are all facing now because of Covid-19 — all of us, in every country, no matter what age we are, whether rich or poor. These do not happen often but they are not completely foreign. After all, everyone in South Africa over the age of 30 has experienced a seismic social change in their own lifetime.

Change is inevitable. And institutions that resist change, or ignore it, will eventually die. The National Party refused to change and tried to persuade the rest of the world that South Africa would never change — and where are they now? Perhaps current political parties should reflect on that when they think they are beyond change.

Whatever the source of change, I would propose that we approach it with a positive attitude: ask not “does this change come from God?” but rather “what is God asking of me in the face of this change?” Sometimes that’s easier for us to see than at other times. But that just means we need to reflect a bit more intently.

Let me give you an example: the “new normal” means that if we go to church, we have to leave immediately after receiving Communion: this is a difficult experience for many readers. But perhaps we can see it as a way of God reminding us — in case we have forgotten — that receiving Communion is not just an act of personal piety but also a commission to take Christ out into the world. We are now literally doing that, with the host still in our mouths as we walk out of the church.

In all change there is also continuity. This is the first time you will be reading my words in a monthly magazine — and yet some of you (generously) have been following my columns in the newspaper format over the past seven years. And this new format of The Southern Cross is just one in a series of changes it has undergone in its 100 years.

It is fitting that the new Southern Cross is coming out in spring. This is the season when God reminds us every year that the period of “change and decay” that is winter, is followed by a period of “change and growth”. In the northern hemisphere, Easter is in fact a springtime festival. Since many of us are going back to our churches for the first time since Lent, this year spring can also be a time of change and growth for us as Christians.

The world is charged with the grandeur of God: and the world reminds us of God’s promise of change and growth every year; and in fact, every day. So let me end with a quote from yet another Jesuit, the poet Gerard Manly Hopkins: “And though the last lights off the black West went/ Oh, morning, at the brown brink eastward, springs – /Because the Holy Ghost over the bent/ World broods with warm breast and with, ah! bright wings.”

This column by Raymond Perrier was printed in the October issue of The Southern Cross Magazine.

Subscribe to receive more content like this.  There is a range of options – 3,6,12 months and print, digital or a combination subscription to both (for the same price!)