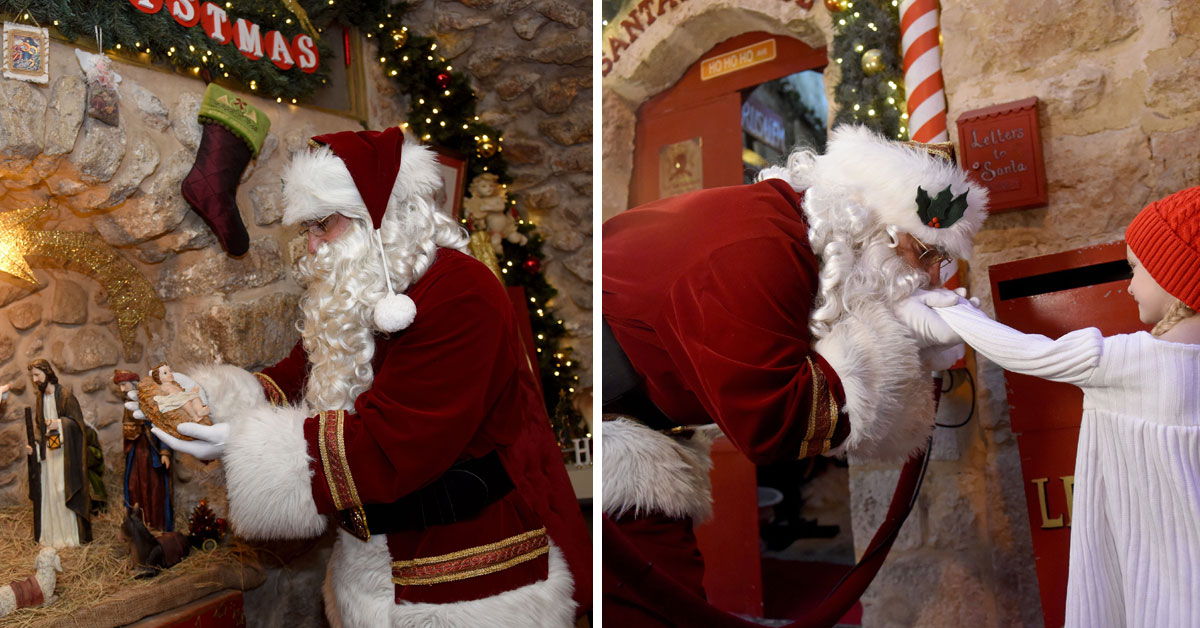 Palestinian Catholic Issa Kassissieh, known as Jerusalem Santa, holds the baby Jesus figurine at a Nativity scene inside Santa’s House Dec. 7, 2020. The house was created out of his family’s 700-year-old home in the Old City of Jerusalem. (CNS photo/Debbie Hill)

By Judith Sudilovsky – Walk down St Peter Street from the Old City’s New Gate, past some shuttered shops and the closed Knight’s Palace hotel, continue down through the winding stone-paved alleyway of the Christian Quarter and soon you will hit “Santa Lane,” where in December you can find the festively decorated and lit Santa’s House, replete with a big red Santa mailbox next to the door.

For three years, Palestinian Catholic and well-known former basketball player Issa Kassissieh has been dressing up as the Jerusalem Santa and decorating his family’s traditional 14th-century home – the designated Santa House – at the junction of St. Peter Street and Latin Patriarchate Road.

This year, Santa is needed even more.

“People are stressed,” he said. “Most people say, ‘Hey Santa, let this year be finished.’ They make their Christmas wish for an end to this crazy situation. People are very scared.”

Kassissieh, 42, said St. Nicholas’ spirit of giving, love and peace at this time brings happiness to many people who have been struggling with the effects of COVID-19 on their lives.

“I try to bring happiness, even now when I can’t give a hug. I try to give them the energy of love. When I talk to the children, I see they need that in this situation. A smile, a nice word — they are very happy for that,” he said.

Though the Old City has been designated as a COVID-19 “red zone” by the Israeli Ministry of Health, Santa’s house will still remain open, following COVID-19 directives, he said. Visitors will have their temperature taken before entering the house, only immediate families will be allowed in together, and mask-wearing will be enforced. Kassissieh wears a clear plastic mask that does not cover up Santa’s long curly white beard.

Kassissieh, who is the cousin of the Palestinian ambassador to the Vatican of the same name, said 15 years ago he dusted off his father’s old Santa suit and started by wearing it just on the day the Jerusalem municipality gave out free Christmas trees to residents. When he saw how excited children got by seeing him, his Santa role began to grow, and he has since attended several official Santa Claus schools in the United States and Europe.

“Anyone can put on a red suit, but if you don’t do it from the heart, you can’t bring the miracle of Santa,” he said.

A first-floor room of his family’s house is colourfully festooned with Christmas decorations and lights. Kassissieh has arranged a Santa desk with a scroll of children’s names, Santa’s workshop and Santa’s kitchen with Christmas cookies. The traditional Old City vaulted ceiling and high arches of the house might be the only giveaways that this is not the North Pole.

In better years, Kassissieh has given his Santa a local twist by trading in the reindeer for a borrowed camel he rides in the Old City, to the delight of tourists and locals.

“Two thousand years ago, the three Wise Men came here riding camels to the Holy Land. I want to bring back the life of how it used to be, the history of the Holy Land where it all started. This is the main place where it starts,” he said.

Though the house is open to visitors by appointment throughout the year, Kassissieh kicks off the official Christmas season Dec. 1. Normally there is a line of people waiting outside the house, and often Kassissieh receives visitors until midnight.

This year, although the weekend brought many children, on a recent Monday evening only three Russian Jewish families arrived from the centre of Israel so their young daughters could visit Santa, who in communist Russia had been transformed into the nonreligious Russian folk character of Grandfather Frost for the New Year holiday of Novy God.

“Everybody comes to me, people of all religions come. I open my hand and my heart to every religion. I don’t care who they are. My message is love and peace,” said Kassissieh. “Santa is for everybody.”

Making the one-hour drive to Jerusalem with her husband so their daughter Lily, 3, could see Santa was worth it, said Natalya Tselicov, 34, but she said it was sad to see so many stores of the Old City closed.

Mia Tusko, 4, could hardly contain her excitement as she put a letter in Santa’s mailbox. Her mother, Marina Tusko, 40, said her daughter was asking Santa for an LOL doll and a puppy. But because they can’t get a puppy without a bigger apartment, Mia had also asked for an apartment.

“Suddenly there is something good to come see,” said Tusko, who rode on public transportation into Jerusalem. Despite the COVID-19 restrictions, they had to have some sort of normalcy, she said.

Santa was not only bringing holiday cheer to children, though. Workers from the Awad Tourist Agency had come to have their picture taken with Santa for a company Christmas card, although they had not been working since the outbreak of the virus.

“It raises our morale coming here,” said Charlie Awad, 63. “We aren’t kids anymore, but we would like to feel like kids again for a bit with the magic of Santa.”