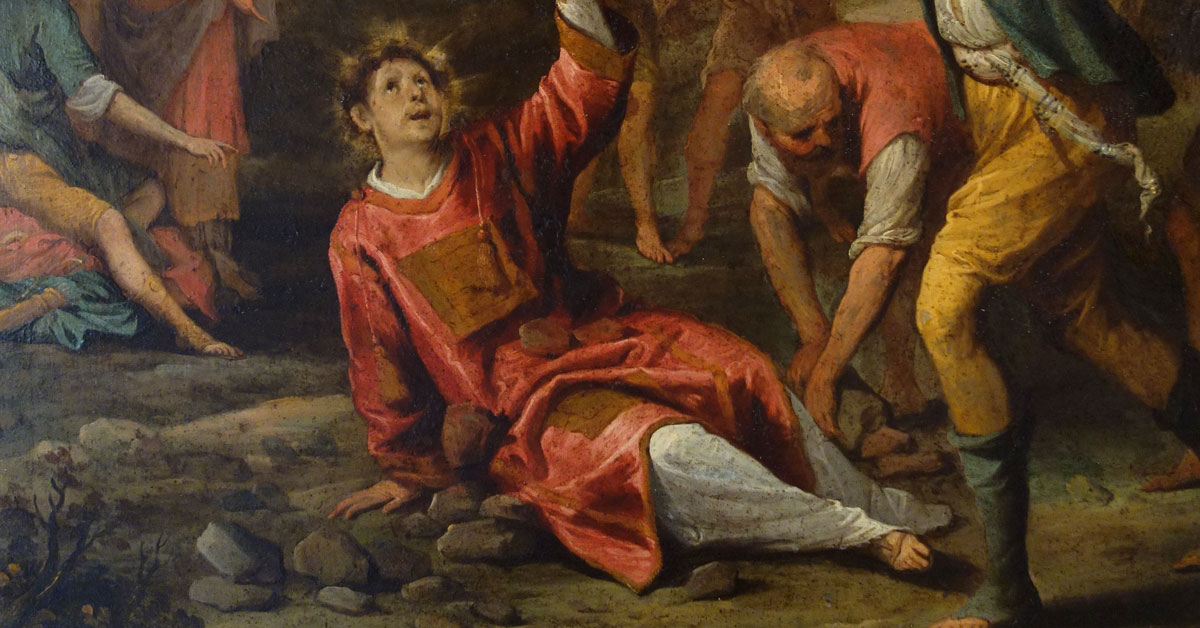 Authored By: Pope Benedict XVI – God never tires of reaching out to man

God never tires of reaching out to man; even if he often encounters an attitude of misunderstanding and diffidence, if not of “obstinate opposition”. The Holy Father said this to the faithful gathered in St Peter’s Square at the General Audience on Wednesday, 2 May [2012], with reference to the witness and prayer of St Stephen, the Protomartyr. The following is a translation of the Pope’s Catechesis in his series of commentaries on prayer, which was given in Italian.

In our recent Catecheses we have seen how through personal and community prayer the interpretation of and meditation on Sacred Scripture open us to listening to God who speaks to us and instils light in us so that we may understand the present.

Today, I would like to talk about the testimony and prayer of the Church’s first martyr, St Stephen, one of the seven men chosen to carry out the service of charity for the needy. At the moment of his martyrdom, recounted in the Acts of the Apostles, the fruitful relationship between the Word of God and prayer is once again demonstrated.

Stephen is brought before the council, before the Sanhedrin, where he is accused of declaring that “this Jesus of Nazareth will destroy this place, [the Temple] and will change the customs which Moses delivered to us” (Acts 6:14). During his public life Jesus had effectively foretold the destruction of the Temple of Jerusalem: you will “destroy this temple, and in three days I will raise it up” (Jn 2:19). But, as the Evangelist John remarked, “he spoke of the temple of his body. When therefore he was raised from the dead, his disciples remembered that he had said this; and they believed the Scripture and the word which Jesus had spoken” (Jn 2:21-22).

Stephen’s speech to the council, the longest in the Acts of the Apostles, develops on this very prophecy of Jesus who is the new Temple, inaugurates the new worship and, with his immolation on the Cross, replaces the ancient sacrifices. Stephen wishes to demonstrate how unfounded is the accusation levelled against him of subverting the Mosaic law and describes his view of salvation history and of the covenant between God and man. In this way he reinterprets the whole of the biblical narrative, the itinerary contained in Sacred Scripture, in order to show that it leads to the “place”, of the definitive presence of God that is Jesus Christ, and in particular his Passion, death and Resurrection. In this perspective Stephen also interprets his being a disciple of Jesus, following him even to martyrdom.

Meditation on Sacred Scripture thus enables him to understand his mission, his life, his present. Stephen is guided in this by the light of the Holy Spirit and by his close relationship with the Lord, so that the members of the Sanhedrin saw that his face was “like the face of an angel” (Acts 6:15). This sign of divine assistance is reminiscent of Moses’ face which shone after his encounter with God when he came down from Mount Sinai (cf. Ex 34:29-35; 2 Cor 3:7-8).

In his discourse Stephen starts with the call of Abraham, a pilgrim bound for the land pointed out to him by God which he possessed only at the level of a promise. He then speaks of Joseph, sold by his brothers but helped and liberated by God, and continues with Moses, who becomes an instrument of God in order to set his people free but also and several times comes up against his own people’s rejection.

In these events narrated in Sacred Scripture to which Stephen demonstrates he listens religiously, God always emerges, who never tires of reaching out to man in spite of frequently meeting with obstinate opposition. And this happens in the past, in the present and in the future. So it is that throughout the Old Testament he sees the prefiguration of the life of Jesus himself, the Son of God made flesh who — like the ancient Fathers — encounters obstacles, rejection and death. Stephen then refers to Joshua, David and Solomon, whom he mentions in relation to the building of the Temple of Jerusalem, and ends with the word of the Prophet Isaiah (66:1-2): “Heaven is my throne, and earth my footstool. What house will you build for me, says the Lord, or what is the place of my rest? Did not my hand make all these things?” (Acts 7:49-50).

In his meditation on God’s action in salvation history, by highlighting the perennial temptation to reject God and his action, he affirms that Jesus is the Righteous One foretold by the prophets; God himself has made himself uniquely and definitively present in him: Jesus is the “place” of true worship. Stephen does not deny the importance of the Temple for a certain period, but stresses that “the Most High does not dwell in houses made with hands” (Acts 7:48).

The new, true temple in which God dwells is his Son, who has taken human flesh; it is the humanity of Christ, the Risen One, who gathers the peoples together and unites them in the Sacrament of his Body and his Blood. The description of the temple as “not made by human hands” is also found in the theology of St Paul and in the Letter to the Hebrews; the Body of Jesus which he assumed in order to offer himself as a sacrificial victim for the expiation of sins, is the new temple of God, the place of the presence of the living God; in him, God and man, God and the world are truly in touch: Jesus takes upon himself all the sins of humanity in order to bring it into the love of God and to “consummate” it in this love. Drawing close to the Cross, entering into communion with Christ, means entering this transformation. And this means coming into contact with God, entering the true temple.

Stephen’s life and words are suddenly cut short by the stoning, but his martyrdom itself is the fulfilment of his life and message: he becomes one with Christ. Thus his meditation on God’s action in history, on the divine word which in Jesus found complete fulfilment, becomes participation in the very prayer on the Cross. Indeed, before dying, Stephen cries out: “Lord Jesus, receive my spirit” (Acts 7:59), making his own the words of Psalm 31[30]:6 and repeating Jesus’ last words on Calvary: “Father, into your hands I commit my spirit” (Lk 23:46). Lastly, like Jesus, he cries out with a loud voice facing those who were stoning him: “Lord, do not hold this sin against them” (Acts 7:60).

Let us note that if on the one hand Stephen’s prayer echoes Jesus’, on the other it is addressed to someone else, for the entreaty is to the Lord himself, namely, to Jesus whom he contemplates in glory at the right hand of the Father: “Behold, I see the heavens opened, and the Son of man standing at the right hand of God” (v. 55).

Dear brothers and sisters, St Stephen’s witness gives us several instructions for our prayers and for our lives. Let us ask ourselves: where did this first Christian martyr find the strength to face his persecutors and to go so far as to give himself? The answer is simple: from his relationship with God, from his communion with Christ, from meditation on the history of salvation, from perceiving God’s action which reached its crowning point in Jesus Christ. Our prayers, too, must be nourished by listening to the word of God, in communion with Jesus and his Church.

A second element: St Stephen sees the figure and mission of Jesus foretold in the history of the loving relationship between God and man. He — the Son of God — is the temple that is not “made with hands” in which the presence of God the Father became so close as to enter our human flesh to bring us to God, to open the gates of heaven.

Our prayer, therefore, must be the contemplation of Jesus at the right hand of God, of Jesus as the Lord of our, or my, daily life. In him, under the guidance of the Holy Spirit, we too can address God and be truly in touch with God, with the faith and abandonment of children who turn to a Father who loves them infinitely. Thank you.