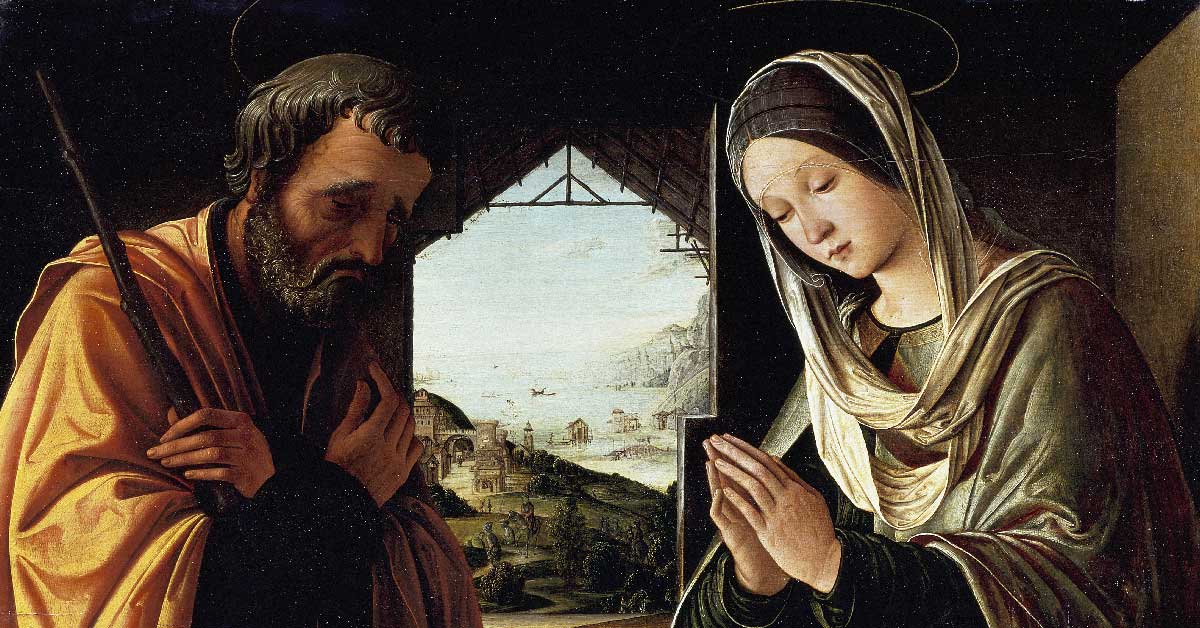 Günther Simmermacher looks at the life & times of the Holy Family

The Bible is not generous with biographical detail about the Holy Family. We encounter Joseph, Mary and Jesus in the Nativity story, the Flight into Egypt, Jesus’ circumcision and presentation in the Temple, and the time Jesus is left behind in the Temple. Poor Joseph doesn’t even get a spoken word in the Gospels. But he doesn’t need to: guided by faith — and angels — he stands by Mary, despite her peculiar pregnancy, and raises Jesus as his own.

First of all, why did Joseph believe Mary’s pregnancy story?

That is perhaps the most remarkable thing about Joseph. His betrothed — the marriage seems to have been arranged — claims to have been impregnated by the Holy Spirit to bear the Messiah. If our son came home with a story like that, we’d tell him to run for the hills. And that’s Joseph’s impulse as well. But if he rejects his betrothed, her life will be over — socially or even physically, for adultery is punishable by death. So he has that to consider.

An angel started this situation, and an angel resolves it by telling Joseph to take Mary as his wife because she has conceived by the Holy Spirit (Matthew 1:20-21). It’s not the last time Joseph receives angelic counsel. An angel would also tell him to take his family into exile in Egypt and when it was safe to go home.

Now, where and when were Joseph and Mary born?

Scripture gives us the whole genealogy of Joseph, except date and place of birth. It is commonly believed that Joseph was born in Bethlehem, and there is nothing to suggest an alternative location — other than his presence in Nazareth, from where he and the pregnant Mary must travel to Bethlehem for that first Christmas.

Tradition places Mary’s birth in Jerusalem. In fact, the church of St Anne near Lions’ Gate marks the spot of her birth in a grotto. Down the road, a Greek Orthodox chapel also claims to have the birthplace of Our Lady. This points to a strong tradition that Mary’s family lived in this part of Jerusalem.

As for years of birth, in both cases we can only guess. We don’t even know when Jesus was born, but since it was during the reign of King Herod, it was at the latest in 4 BC, the year of Herod’s death. And then we must give Herod time for the massacre of the innocents.  Let’s say, for the sake of mathematical calculation, that Jesus was born in 5 BC.

It is commonly assumed that Mary was about 14 when she conceived the Lord. So her birth must have been around 19 BC. We don’t even have a good clue about how old Joseph was when he married Mary, but many scholars believe that he was substantially older than her. If we guess that Joseph was around 35 at Jesus’ birth, he would have been born around 40 BC. 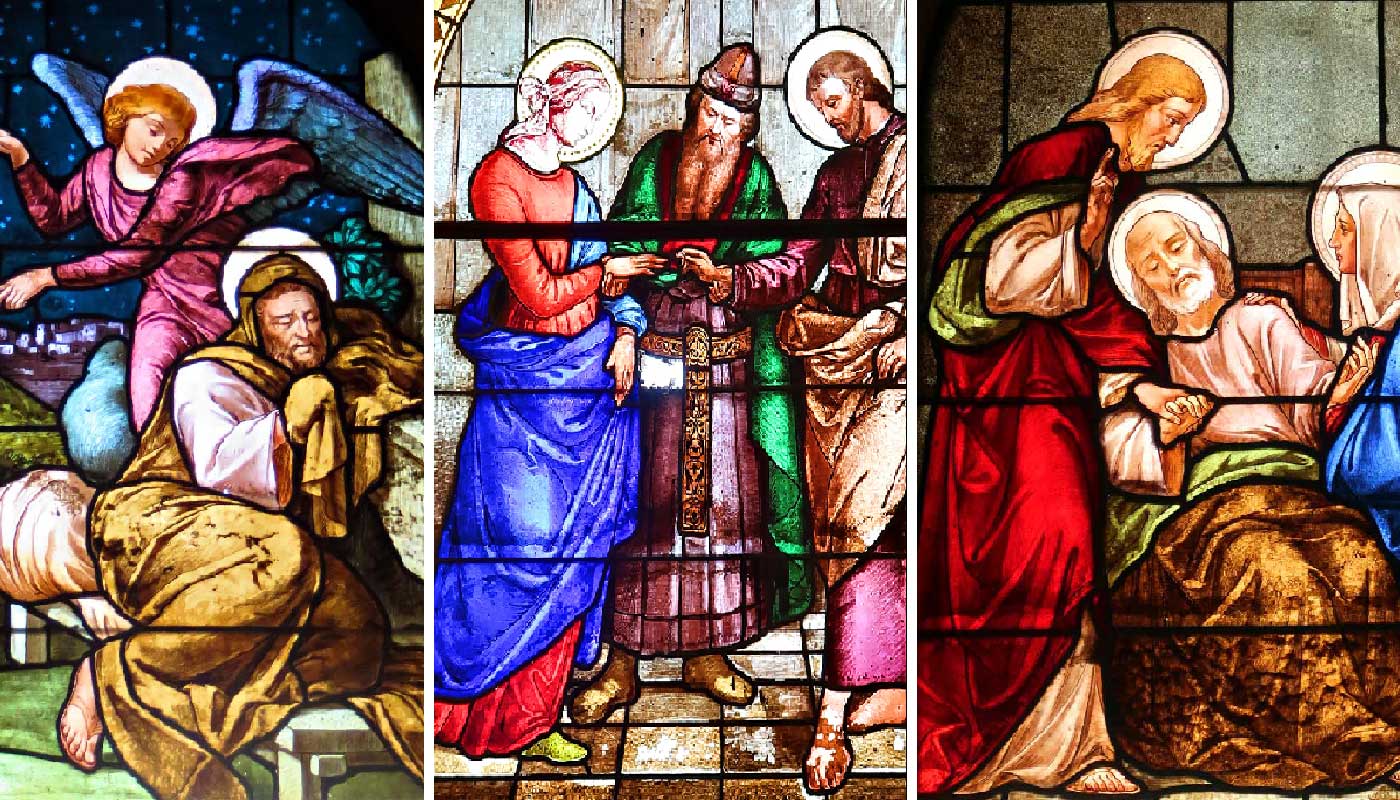 The dream of Joseph, the marriage of Mary and Joseph, and the death of Joseph, in St Joseph’s church in Nazareth. (Photos: Günther Simmermacher)

Our Saint of the month poster in the December issue features the Holy Family by Kristyn Brown. To order back issue contact admin@scross.co.za

How did they end up in Nazareth?

Again, we don’t know. Some scholars say that Joseph, an artisan builder, came to Nazareth to work on the reconstruction of the nearby city of Sepphoris, but that project started only after Herod’s death. However, the old city of Sepphoris and nearby Cana — then bigger than Nazareth — might have offered job opportunities.

We also don’t know what brought Mary to Nazareth. Perhaps her elderly parents, Anne and Joachim, had died and Mary came to live with relatives.

So, Joseph was a carpenter…

Well, maybe not. The Greek originals of the Gospels call him a tekton (a word that has the same root as our term “technology”), which means artisan. Joseph was a specialist of some sort, but with wood rare in that part of Galilee, he (and later Jesus) might have worked mostly with stone and other materials, possibly including wood.

How did they live in Nazareth?

Nazareth was a village of maybe a few hundred people. It had a well (it still exists in modern Nazareth today), so water was abundant, and Joseph was a specialist artisan in his trade, so the Holy Family was probably living comfortably, neither rich nor poor. A few first-century homes have been excavated in Nazareth, including one that archaeologists believe might have been the house of the Holy Family.

When Jesus tries to speak in the synagogue of Nazareth, the people ask: “This is the carpenter’s son, surely? Is not his mother the woman called Mary, and his brothers James and Joseph and Simon and Jude? His sisters, too; are they not all here with us?” (Matthew 13:55-56).

For some Protestants, this is proof that Mary was not a lifelong virgin, but had other children. But some suggest, plausibly, that the six siblings were brought into the marriage by a widowed Joseph.

As we saw with the word tekton, translations can be deceptive. The Greek term the Gospels use to describe the four named men is adelphos, which can be translated as both brother and kinfolk — a blurring of definitions we in Africa can readily recognise.

For scholars, the dispute is still open, but for us Catholics, it is irrevocably closed. James, Joseph, Simon, Jude and the two sisters whose names went unrecorded were not Mary’s children — they might have been half-siblings or cousins.

What kind of Jews were they?

Mary might have come from a priestly family — her cousin Elizabeth’s husband was a Temple priest, and the Magnificat suggests a mind that draws from theological erudition. Of course, we know that the Holy Family made pilgrimages to the Temple in Jerusalem.

But we don’t know which Jewish tradition they belonged to. Judaism comprised several parties with very different theologies (such as the Pharisees and the Sadducees, whom we encounter in he Gospels).

The late scholar Fr Bargil Pixner OSB suggested that the Holy Family were Essenes, the group we know from the Dead Sea Scrolls. And John the Baptist, Jesus’ cousin, has been linked to the Essenes as well. But we see in Scripture that Jesus was close to the Pharisees, whose theology is more similar to what became Christianity than that of any of the other Jewish sects.

When did Joseph die?

We have no idea. We hear about him when young Jesus is found in the Temple, and nothing thereafter. Life expectancy in those days was much lower than it is today. If we guess Joseph was about 35 years old when Jesus was born around 6 to 4 BC, and he reached the age of 60 — then an old age — he might have died around the year 20 AD.

And when did Mary die?

Well, Catholic belief is that Mary did not die but fell into eternal sleep before she was assumed into heaven. The Transitus Mariae, an apocryphal document which provided one basis for the belief in Mary’s bodily assumption, suggests that Mary was no older than 50 when she closed her eyes.

By that calculation, if Mary was about 14 when she gave birth to Jesus, she was born around 19 BC. If she was indeed 50 years old when she closed her eyes, then that would have been in around the year 31 AD, soon after her Son’s crucifixion.

Günther Simmermacher is the author of The Holy Land Trek: A Pilgrims’ Guide. This article was published in the December issue of The Southern Cross magazine