Woman in charge at the SACBC 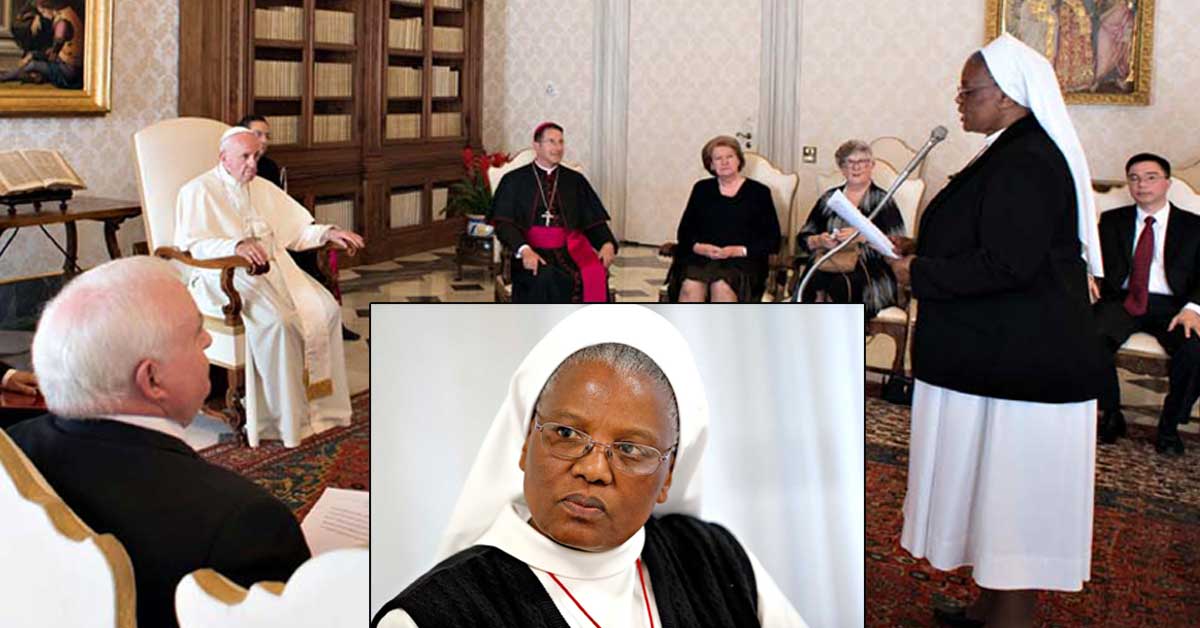 Sr Hermenegild Makoro addresses Pope Francis during a meeting of the Pontifical Commission for the Protection of Minors in 2017. Photos: L’Osservatore Romano; Paul Haring/CNS

Sr Hermenegild Makoro CPS served for 15 years in the general secretariat of the bishops’ conference. The SACBC’s first-ever woman secretary-general will be succeeded in the new year by another woman, Sr Thisfhiwa Munzhedzi OP.

At the end of December, Sr Hermenegild Makoro CPS will end a tenure of nine years as the SACBC’s secretary-general. She spoke to DALUXOLO MOLOANTOA.

When Sr Hermenegild Makoro closes the doors to her office in Khanya House, the Pretoria headquarters of the Southern African Catholic Bishops’ Conference, for the last time at the end of December, the Precious Blood Sister will conclude 15  years of service in the general-secretariat, which runs the conference’s daily affairs.

Her successor, Dominican Sister Tshifhiwa Munzhedzi, will be the SACBC’s second woman “sec-gen”, but Sr Hermenegild believes much credit is due to the first woman in the secretariat: Holy Family Sister Brigid Flanagan, who served as associate secretary-general during the turbulent days of the struggle in the 1980s.

“In spite of her acting as the secretary-general when [secretary-general] Fr Smangaliso Mkhatshwa was in and out of political detention, she was never given the title of secretary-general — but she held the bishops’ conference together. I salute her for laying the foundation,” Sr Hermenegild noted. “For me, this was already the beginning of the shift in thinking among our bishops, recognising the abilities in Sr Brigid that a woman could hold a high position in the Church. With my appointment as secretary-general in 2011, this thinking came to fruition.”

It was a long journey to that point. Born on December 7, 1951, near Mount Fletcher in the Eastern Cape, she was the second of four children and the only daughter. Her childhood was happy. “I had a wonderful time as a young person with my three brothers. We were a very happy Christian family. We prayed and sang together. My parents were not highly educated, but they loved education. We had a very good school, and you will be surprised to learn that the woman who taught me from Sub A to Standard 2 is still alive.”

A shy child, she was “not very active in church activities, as I kept to myself too much. I enjoyed the company of my mother most, but I was a member of the church choir”. She also kept a respectful distance from the nuns at her parish. “I was always impressed by the work of the Sisters in my parish, although I always kept at a distance as I never wanted to mix with them. I found them too strict and I avoided them. But I liked them from a distance.”

The Makoro family prayed for vocations every day — and then the call from God came to their daughter. “When the spark of becoming a nun came to me, it was not difficult as I had support from both my parents and grandparents. When I asked to join the religious life, my father was mostly concerned about me going without my matric. This was just a concern that every parent has about the future of their child. My aunt, who was also a nun, also thought that I should complete my matric first. Of course, she also directed me to other congregations, but I was sure that I wanted to join the Precious Blood Sisters.”

Having become a Precious Blood Sister in Mthatha in 1976, Sr Hermenegild pursued a life in teaching, starting at Mariazell High School. “I am a teacher,” she said. “Indeed, it’s a vocation. I love it. I have many former pupils whom I taught who went for teaching because of how I was before them as teacher. Some were disappointed that I left teaching in the classroom. But I told them, I will always be a teacher.” For Sr Hermenegild, it was a cause of great joy to see young people in her classes “opening their eyes to become a better person”.

And so, in 2005, she was appointed associate secretary-general to Fr Vincent Brennan SMA at Khanya House. She regards as her biggest achievement “that the bishops believed in me to keep me for nine years as secretary-general. This is an achievement not just for me personally but for the women in the Catholic Church in our region: that if women are given the chance, they can do it!”

Another accomplishment was the completion of the SACBC’s new Pastoral Plan, “Evangelising Community: Serving God, Humanity and Creation”, which was launched in January this year. “It now needs to be implemented,” Sr Hermenegild emphasised.

A personal highlight was finding “the new beautiful premises” for the SACBC’s headquarters. The move from the cold, dark building in Pretoria’s Kruger Street to the quiet and light premises at the old Santa Sophia complex, adjoining St John Vianney Seminary in Waterkloof, took place last year.

Meeting with the president

As secretary-general, Sr Hermenegild was part of many meetings involving the bishops. Meeting with President Cyril Ramaphosa was particularly memorable. “It was a great experience for me to sit roundtable with the president of the country. He sat and listened to our bishops when they made an input to him and challenged him about the things they see, as the leaders of the Church. I hope these meetings have also opened a door for our bishops to exercise their prophetic role.”

Sr Hermenegild’s reputation extends beyond Southern Africa. In 2014, Pope Francis appointed her to serve on the newly-established Pontifical Commission for the Protection of Minors, reappointing her to a second term in 2018. She has been outspoken on the subject. In an interview with Spotlight.Africa last year, she stressed that policies and protocols alone “won’t help us” deal with sexual abuse in the Church, saying that the scandal “has penetrated the heart of the Church”. She told The Southern Cross: “A church is meant to be a safe place. Being a member of the commission, I hope to see that one day our Church will indeed be that safe haven for our young people.”

She noted that the pontifical commission has three main focus areas: working with survivors; education and formation; and safeguarding guidelines and norms. She serves on the education and formation portfolio. “We do awareness-raising, what to do and what not to do,” Sr Hermenegild said, adding emphatically: “What needs to be done, of course, is to prevent abuse taking place in our Church.” Abuse, she said, “causes life-long damage and destruction in the abused person”. Rather than focusing just on statistics, the hurt that abuse causes is what needs to be highlighted. “It is painful,” she added.

Sr Hermenegild’s final year as secretary-general was, obviously, overshadowed by the Covid-19 pandemic. She believes the local Catholic Church “has done well as a response with emergency relief. Caritas SA, dioceses, religious communities, different Catholic organisations in parishes and individuals have done very well in providing food parcels to the hungry and migrants and refugees. An amount of more than R2 million went to the different dioceses for relief. Our Justice & Peace Commission, with UN Women, distributed food parcels and PPEs to a number of dioceses.”

As churches were closed, virtual Masses, reflections and sermons were offered, she noted. “Many of our people lived on that. We have seen that in many instances there was creativity on the side of the bishops and their priests,” she said. “Maybe more could have been done to meet the needs of our communities. Many people needed the support of the Church especially when they lost their loved ones. Unfortunately, Covid-19 didn’t give us notice.”

Her time at the SACBC left Sr Hermenegild with little time for leisure pursuits. “I never stop working. I always find something to do. Otherwise I read as I need to update myself with all that is coming out of the Vatican and happenings in the country.” Once her desk is cleared, Sr Hermenegild hopes to go on a sabbatical abroad — if the pandemic allows her to travel — “and renew myself, so that I am ready for my congregation to send me where I am needed and can make a contribution”.

And her hopes for the future of the Church? “We are the Church; let us own it. I am looking forward to a living Church, where the youth take up their role as the Church of today, a Church that cares and becomes a safe haven for all. The mission of the Church continues, so let us all play our role in building the Church. This is our Church and we are the Church!”