Remembering Archbishop Gabuza as a Friend Of The Poor 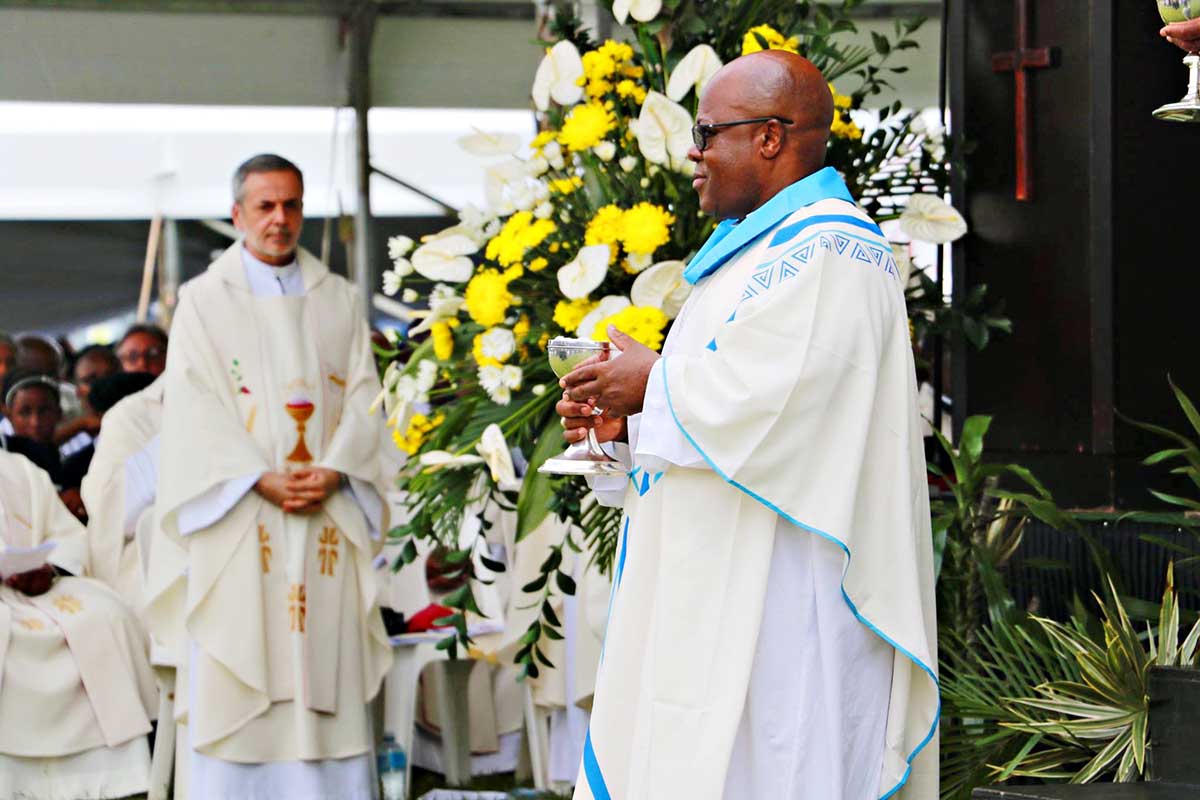 As the Church prepares to bury Archbishop Abel Gabuza, Dominican Father Stan Muyebe recalls the late archbishop’s commitment to the poor and the threats he received for that.

I worked closely with Archbishop Gabuza when he served as the chairperson of SACBC Justice and Peace Commission. As a quiet and reserved person, I know he did not talk much to other people about his work and his vision about the Church for the poor.

While working with us, he talked a lot about his understanding of a prophetic Church. I would like to share a little bit about some of his ideas. It is a side of him that others may not know. I hope this sharing would deepen our comfort as we mourn his loss and celebrate the richness of his life as a pastor and friend of the poor.

THE PLIGHT OF THE WORKING POOR

There was a simplicity about Archbishop Gabuza that inspired public fascination and admiration, especially when we were at high level meetings. When we once attended a high level meeting with the management of a big mining company to interrogate them about illicit financial flows and the use of tax havens, he disappeared during breaktime only to be found minutes later chatting with mine workers. He felt comfortable in their midst — just as he was comfortable with the CEOs — listening to their stories and their struggles as the working poor. He would later reveal that he often felt close to the working poor because he once worked in a factory. He encouraged the Justice and Peace Commission to pay a special attention to the plight of the working poor, especially the mine workers and the farm workers.

He issued a number of press statements on these matters, especially on May 1, as Workers’ Day. He was disappointed when COSATU disintegrated and lost its ability to be a strong voice for the working poor.

CORRUPTION AND STEALING FROM THE POOR

He was the Chairperson of Justice and Peace Commission at a time when Jacob Zuma was the president of the country. Archbishop Gabuza was not afraid to speak out against high levels of corruption perpetrated during Mr Zuma’s administration. In his spirituality, the archbishop believed in a God who has a deep sense of compassion for the poor and the suffering in our country, the God who has heard the cries of the poor. It was this deep encounter with God’s concern for the poor and their suffering that inspired him to speak out against corruption.

This sometimes came at a price. He used to receive emails with threats, including some from cabinet ministers who are Catholics. This did not, however, stop him from speaking out. The threats were more vicious when he issued a statement condemning the president’s misuse of public funds to upgrade his private residence in Nkandla. The same happened when he challenged the corruption behind government’s failure to eradicate bucket toilets in Free State Province. In the midst of threats, he insisted that we should not make the threats public. We should not even let other bishops know about the threats. He believed there was no reason to worry. God would protect him.

At the same time, he did not want to become a centre of attention. During the Zuma administration, he was disappointed with the serious failure in ethical leadership both in the ruling party and the opposition parties, at one time citing that both the ruling party and opposition parties lack genuine concern for the poor and a sense of the common good. He believed that they are both betraying the poor and making mockery of the sacrifice of those who lost their lives during the struggle against apartheid.

He always believed that the bishops should do more to speak prophetically on behalf of the poor and in the interest of the common good. They should, however, do this collectively and after listening intently to the voices of the poor. 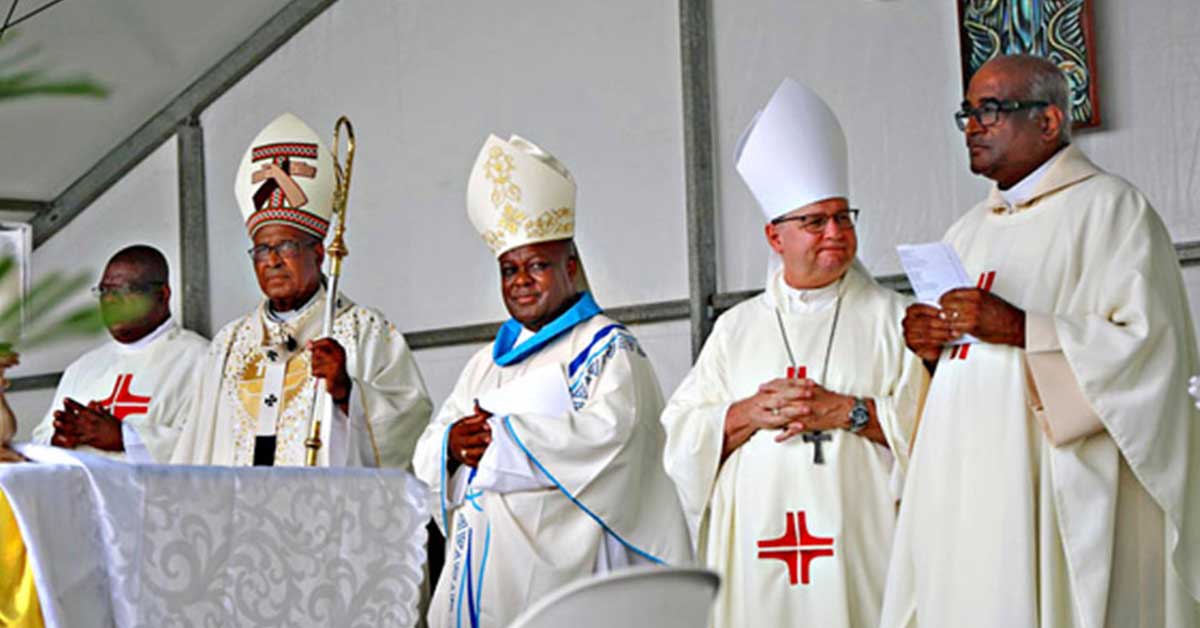 Archbishop Abel Gabuza (second from left) is received in Durban as the archdiocese’s coadjutor in February. With him are Cardinal Wilfrid Napier, apostolic nuncio Archbishop Peter Wells, and Bishop Sylvester David OMI.

Armed with this vision of the prophetic Church, there was a time that he questioned our involvement in the campaign against e-tolls and the campaign against price hike by Eskom. He challenged us to investigate whether these issues really mattered to the poorest of the poor in informal settlement and in remote rural areas. In his view, as he put, “these issues are not really a priority to my friends in the townships”.

THE NEED TO HEAL THE NATION

He often spoke of the need to heal the nation from its painful past. He however believed that the nation would receive God’s gift of reconciliation only when it becomes serious about reversing the economic effects of apartheid, especially the extreme economic inequalities.

The stability of a nation is at risk when the majority of the people remain at the peripheries of an economy. For him, the country cannot sustain extreme inequalities for long. Something will give way.

He was worried about what he called “the sin of racism” within the Church and our reluctance as a Church to confront the problem with honesty and humility. He considered the Church’s response to internal racism to be important for its mission of bringing God’s gift of reconciliation to a racially divided nation. Our parishes would be credible instrument for the healing of the nation if we are open to addressing race matters in the Church through courageous conversation, genuine encounter and the healing of social trauma.

HUMILITY IN FACE OF CRITICISM

Many people have spoken of the humility of Archbishop Gabuza. At the SACBC Justice and Peace Commission, we experienced it as being manifested through his openness to criticisms. We saw him apologising to some people who criticised him for giving a blessing during Mass to the then presidential candidate of ANC, Cyril Ramaphosa. Using few words, he would also humbly admit to failure when people would challenge him that the Church is not speaking loud enough against corruption and structural injustice. He would often say to them: “That is a good point. What should be done differently?”

The archbishop considered himself to be a prophet of hope. When he served as the chair of the Justice and Peace Commission, he believed that at the heart of the social mission of the Church is the need to ensure that the hope based in the encounter of the Risen Christ is brought alive among those at the peripheries of the economy. The broken economy and the broken politics have planted seeds of distrust and despair among the poor, which is sometimes manifesting itself through a language of violence.

For him, our challenge as a Church is to help the poor to rediscover hope and agency, without resorting to the use of violence. In a series of meetings of the Justice and Peace Commission where a leader of a social movement from KwaZulu-Natal, Rev Mavuso, was in attendance, he often insisted on the rediscovery of hope and the use of non-violence.

His prophecy of hope continued even during the pandemic. He believed that our response to the pandemic should be a deep sense of hope that only the Risen Christ can offer. During Easter and Christmas last year, he therefore sent out a letter to the faithful encouraging them not to lose hope in the midst of the storm. In the presence of the Risen Christ, there is no need for despair, even when we are confronted by fierce storm.

THE REASON FOR HOPE THAT IS WITHIN US

In 1 Peter 3:15, St Peter challenged his readers to always be prepared to tell others the reason for the hope that is in them. Through his personal life and strong commitment to his ministry, Archbishop Gabuza bore witness to the reason for hope that was within him, namely the personal encounter with the Risen Christ. It is this reason for hope that inspired him to become a friend of the poor when working as the chair of the SACBC Justice and Peace Commission.

It is as a result of this reason of hope that we join Cardinal Napier in pronouncing Mathew 25, 21 to our situation of mourning: “Well done, my good and faithful servant. Come, share your master’s joy.’ May the soul of Archbishop Gabuza rest in the peace of the Risen Christ.

Fr Stan Muyebe OP is the coordinator of the SACBC Justice and Peace Commission.