With land mines gone, Mass to be celebrated at West Bank baptismal site 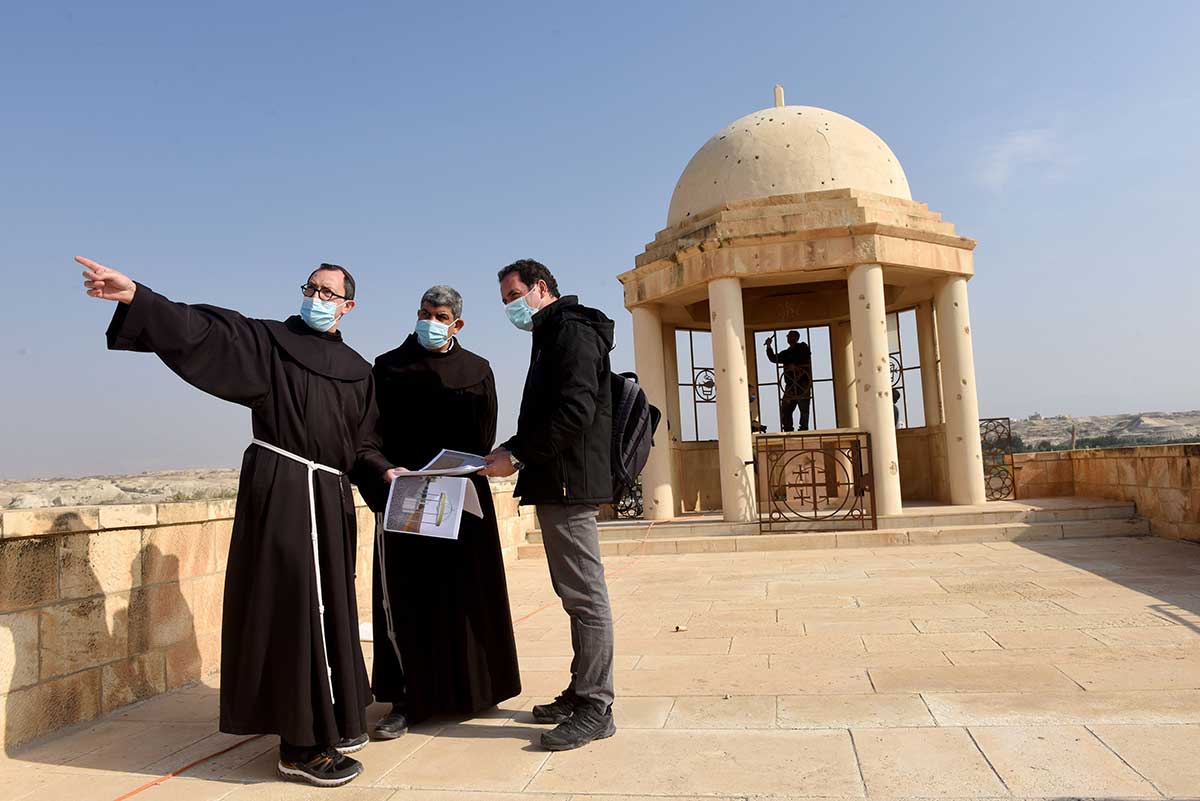 By Judith Sudilovsky – For the first time in 54 years, a Mass will be celebrated January 10, the feast of the Baptism of the Lord, at St John the Baptist Chapel on the banks of the Jordan River.

The almost 100-year-old church and monastery were vacated in 1967 at the outbreak of war between Israel and some of its Arab neighbours, including Jordan, just across the Jordan River. After Israel took control of the area from Jordan, the area was laid out with land mines by both the Israeli army and Palestinian gunmen who battled in the area in the 1960s and 1970s. It became a fenced military zone, off-limits to pilgrims.

Today, the round, second-floor open-air chapel, with its two stairways curving around either side, is still riddled with bullet holes, as are the rooms in the small monastery underneath.

Father Faltas said the Franciscans first starting coming to this place in 1641 and began purchasing land in the area in early 1920 to build churches. In 1933, they built a chapel, which is now located on the edge of the river, and in 1935 built a larger St John the Baptist Church, which was destroyed in an earthquake in 1956, and the existing chapel was built in its place.

Clearing the area of land mines and making it possible for pilgrims to return has been a long process, with organised groups of pilgrims first allowed to come to the banks of the river in 1994 on the Epiphany and Easter holidays following the signing of the peace treaty with Jordan. A baptismal site was opened on the water’s edge in 2011 for all visitors, who had to walk down a dirt road to the river, with fences and warning signs on either side admonishing them not to veer off the path because of land mines.

Jordan completed demining its eastern bank of the river by 1999. There, Bethany Beyond the Jordan is recognised as a UNESCO World Heritage Site, “believed to be the location where Jesus of Nazareth was baptised by John the Baptist.” 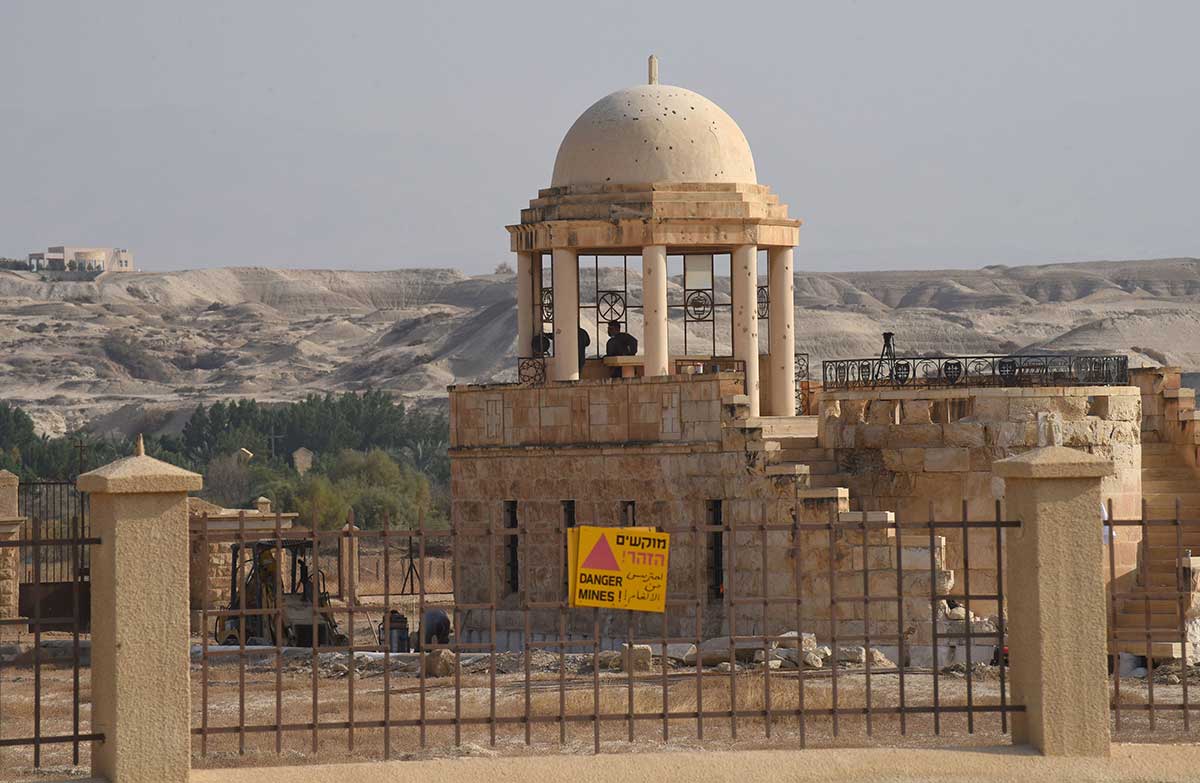 A sign reading “DANGER MINES” hangs outside the Franciscan Chapel of St. John The Baptist at Qasr al-Yahud, on the West Bank of the Jordan River, Dec. 22, 2020. The bullet-marked chapel was returned to the Franciscan Custody of the Holy Land after being closed by the Israelis in 1967 as a closed military zone with minefields. (CNS photo/Debbie Hill)

On the West Bank, the St John the Baptist Chapel, along with chapels and monasteries belonging to other Christian churches, remained off-limits behind the fences, in the middle of the minefields. The Israeli Ministry of Tourism administered the accessible area near the river as a national park.

In 2016, Israel began clearing the area with the help of the British HALO Trust, and finally in October the Franciscan Custody of the Holy Land and Christian churches were able to take possession of their properties.

The Qasr Al-Yahud site is also revered by Jews as the crossing place along the Jordan River of the Biblical Israelites into the Promised Land after having wandered the desert for 40 years.

Leonardo DiMarco, a civil engineer and the director of the technical office of the Custody, said they are planning for 100 people to be present at the outdoor chapel for the Jan. 10 Mass, with socially distanced groupings set up and a mobile baptismal font and altar at the top of the chapel.

Pointing out the layout of the area on maps, DiMarco noted that the chapel is located in the middle of two paths that form a cross and lead to the river. He said the Franciscans were in discussions with the Israeli army to retain the original design.

There are plans to rehabilitate the compound’s walled garden, which over the years has been overtaken by the desert sands, and to build a number of smaller chapels inside the garden to allow for private group and solitary contemplation and prayers for pilgrims, said DiMarco.

“The idea is that pilgrims can come here in preparation to go down to the river,” DiMarco said.

He said he expects the restoration work to be completed by next year and, once travel is permitted again, the site will be open for pilgrimages.

“It is something special, the way the Custody found the place is exactly in the same condition it was after so many years. Everything was left the same, the furniture, small objects, were found in the same place they were left in 1967 when the friars had to leave in a hurry,” he said. He said the bullet holes would not be repaired, but would be kept as a reminder of the war.

“This is the past history of the place, you can’t cancel those things. The door is full of bullet holes, the inside wooden doors. This will be part of the experience of the pilgrims. The place itself is telling something important,” said DiMarco. “It is important; this is a religious place, but not only. It is also a place which was in the middle of a fight.”

What is the Position on Original Sin?

Pope: Either you are with God or with the Devil

Are Church’s Tassels Too Long?