1951: When the Southern African Church Grew Up 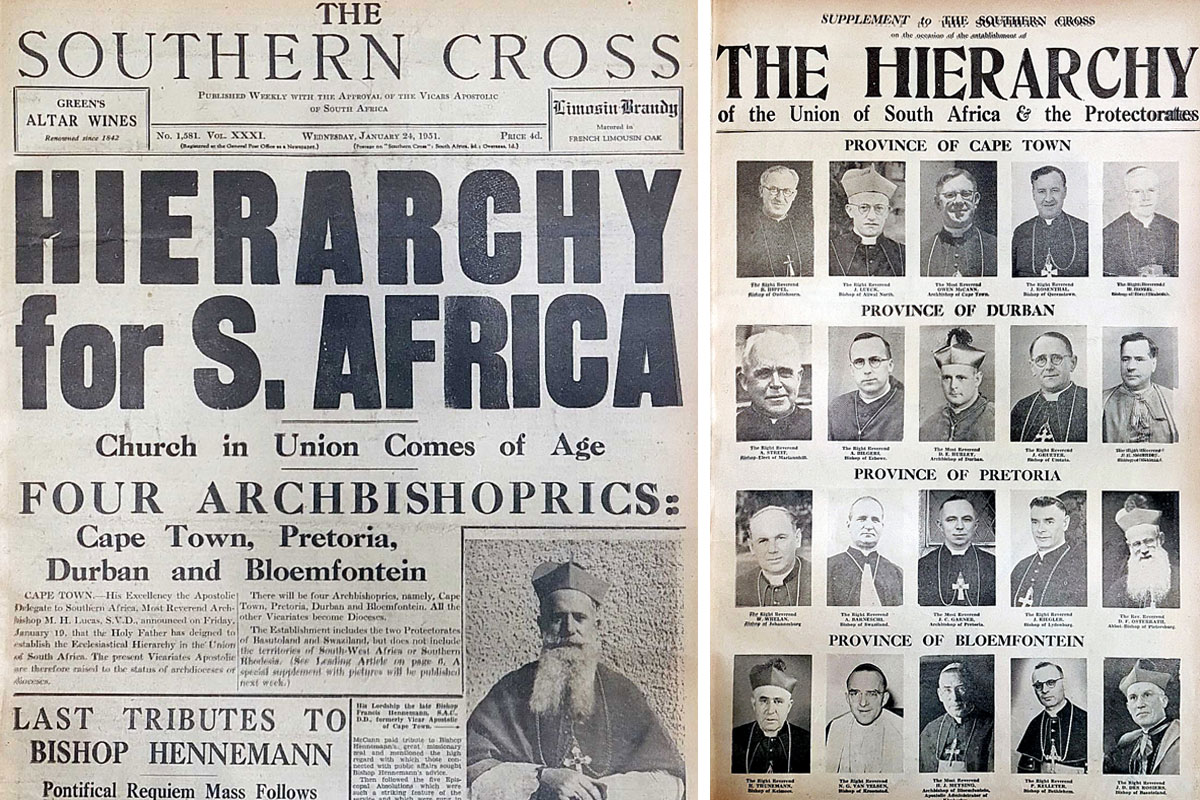 (Left) Frontpage of The Southern Cross of January 24, 1951. (Right): The original hierarchs

70 years ago Pope Pius XII established the Southern African hierarchy. It was the moment the local Church grew up. Günther Simmermacher looks back.

This year marks 70 years since Pope Pius XII established the ecclesiastical hierarchy of Southern Africa. Practically, it led to a restructuring of the local Church, but even more important was the psychological effect: Rome now regarded the Church in Southern Africa as sufficiently mature to run its affairs under the guidance of bishops in charge of their appointed territories. Before that, the pope was the bishop of the whole region, with prefects and vicars-apostolic in the various territories serving as his delegates.

The establishment of the ecclesiastical hierarchy also required a restructuring of the Southern African Catholic Bishops’ Conference (SACBC), which was founded in 1947 and initially covered South Africa, Basutoland (now Lesotho) and Swaziland (now Eswatini).

Botswana joined in 1959 when the apostolic prefecture of Bechuanaland was formed from parts of the dioceses of Kimberley, Bulawayo and Windhoek. Lesotho would form its own bishops’ conference in the 1970s. South-West Africa became part of the SACBC but, as Namibia, left in the 1990s. However, the SACBC’s main focus has always been on South Africa, which today covers 26 out of the conference’s 29 dioceses and vicariates.

The establishment of the hierarchy was formally celebrated with all the bishops and Cardinal Teodosio de Gouveia from Mozambique in late April 1951 in Cape Town, an occasion that coincided with the centenary celebration of the consecration of St Mary’s cathedral. The Southern Cross even published daily during that week. 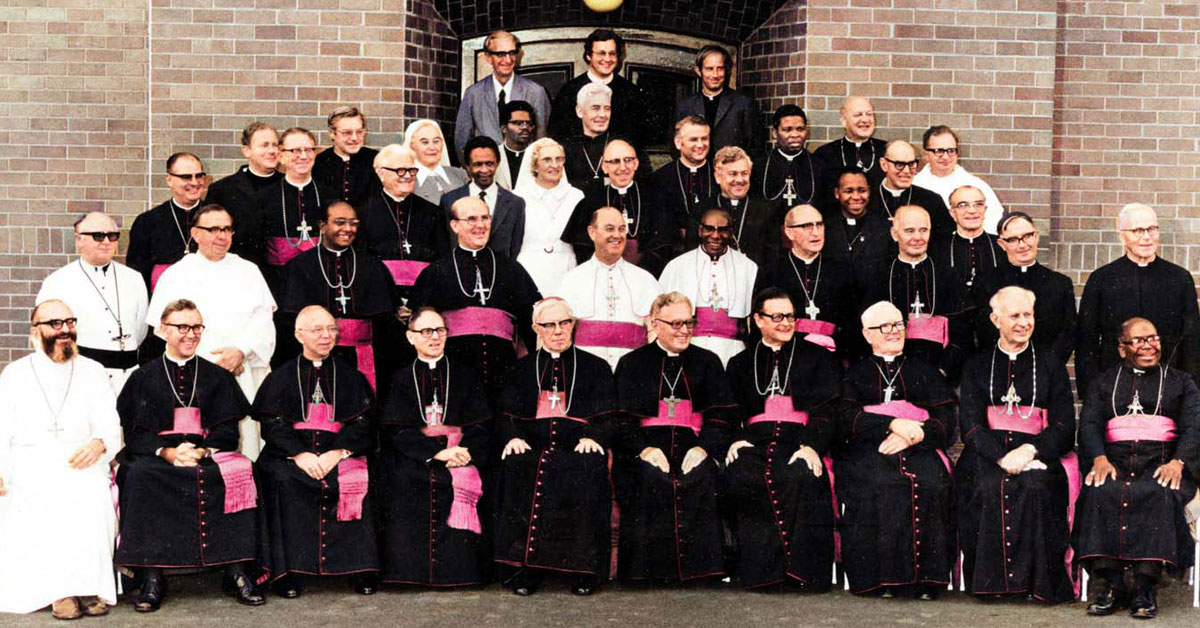 The SACBC bishops, staff and advisers on the silver jubilee of the hierarchy in 1976. Cardinal McCann is sitting fifth from left in the front; Archbishop Hurley fourth from right; Bishop Butelezi far right. Fr Smangaliso Mkhatshwa is standing at left in the second row from the back.

See The SA Bishops in 1976   for identification of all the 40 men and two women pictured. (Colourised for The Southern Cross)

Having its own hierarchy was a big deal for the local Church and its bishops. Before 1951, there were no dioceses in the region, only prefectures and vicariates. Strictly speaking, a bishop must have a see (diocese). If he does not, one will be allocated to him from a pool of defunct dioceses, known as titular sees, as is still the case today for auxiliary bishops, military bishops, nuncios, curial prelates, and so on.

For example, after his appointment to head the vicariate of Natal in 1946, Denis Hurley was not the “bishop of Durban” (that was the pope) but the bishop of Turuzi, a titular see in Tunisia whose exact location nobody knows.

With the establishment of the hierarchy, the active ordinaries in the region became the actual bishops of the territory they were administering.

With the new hierarchy came four new archdioceses: Bloemfontein, Cape Town, Durban and Pretoria (Johannesburg was elevated to that status only in 2007). Their respective archbishops were:

All the founding bishops of the SACBC were white, and only five were born in South Africa. The conference’s first black bishop was Pius Bonaventura Dlamini FFJ, appointed first bishop of Umzimkulu in 1954. The first black archbishop was Peter Fanyana Butelezi OMI, appointed archbishop of Bloemfontein in 1978 (see also our December issue).

The number of locally-born bishops increased over time, but even in the 1950s, they were taking the lead. In 1954, a Catholic delegation comprising Archbishops McCann and Hurley as well as Archbishop William Patrick Whelan of Bloemfontein and Fr Howard St George OMI of Durban met with Prime Minister Hendrik Verwoerd. At one point, the architect of apartheid told the Catholics that he wouldn’t be instructed on policy by foreigners. At this, Hurley responded that only one person in the meeting had not been born in South Africa, and pointed at the Dutch-born Verwoerd.

Like other churches, the SACBC was slow in opposing apartheid. In fact, the most voluble episcopal opponent of apartheid and systemic racism, Cape Town’s Bishop Francis Hennemann SAC, died just as the establishment of the Southern African hierarchy was announced. His anti-racism baton was taken over most visibly by Archbishop Hurley, who would push to have the bishops declare apartheid as “intrinsically evil” in 1957 — in opposition to the views of the nuncio at the time, who preferred a strategy of diplomatic engagement with the Verwoerd regime.

The SACBC fought the apartheid regime on many fronts. In the 1950s, the local Church protected its mission schools from being taken over by the government and its Bantu Education policy by embarking on a massive fundraising drive to ensure their independence. In the 1970s, the bishops eventually followed suit when religious Sisters opened Catholic schools to all races.

But the bishops were not united in how to express their opposition to apartheid. Two archbishops of the same order fought recurring battles over that: Archbishop Hurley advocated a culture of protest, while his fellow Oblate Whelan of Bloemfontein took a more conciliatory line before his sudden death in 1966. Over the decades, the SACBC became increasingly active in its opposition to apartheid.

During the repeated detention of its secretary-general, Fr Smangaliso Mkhatshwa, in the 1980s, the SACBC stood by the priest. In 1986, the SACBC even established an alternative weekly newspaper, New Nation, to serve as a tool of communication in the struggle. The apartheid regime recognised in the SACBC an enemy, as it showed when it bombed its headquarters, Khanya House, in 1988.

Since the advent of democracy in 1994, the SACBC’s focus in the public sphere has been on social issues, justice and reconciliation, with political engagement delegated mostly to the Catholic Parliamentary Liaison Office, which was established in 1997.

The conference’s greatest post-apartheid achievement may be the work of the SACBC Aids Office, which rolled out antiretroviral clinics at a time when the government was still resisting doing so.

More recently, the SACBC made headlines by successively appointing women to serve as its secretary-general, with Sr Tshifhiwa Munzhedzi OP succeeding Sr Hermenegild Makoro CPS at the beginning of the new year.

Where in 1951 all bishops were white and only five locally-born, 70 years later, 16 of the currently-serving 27 bishops are of colour, and 21 are locally-born.