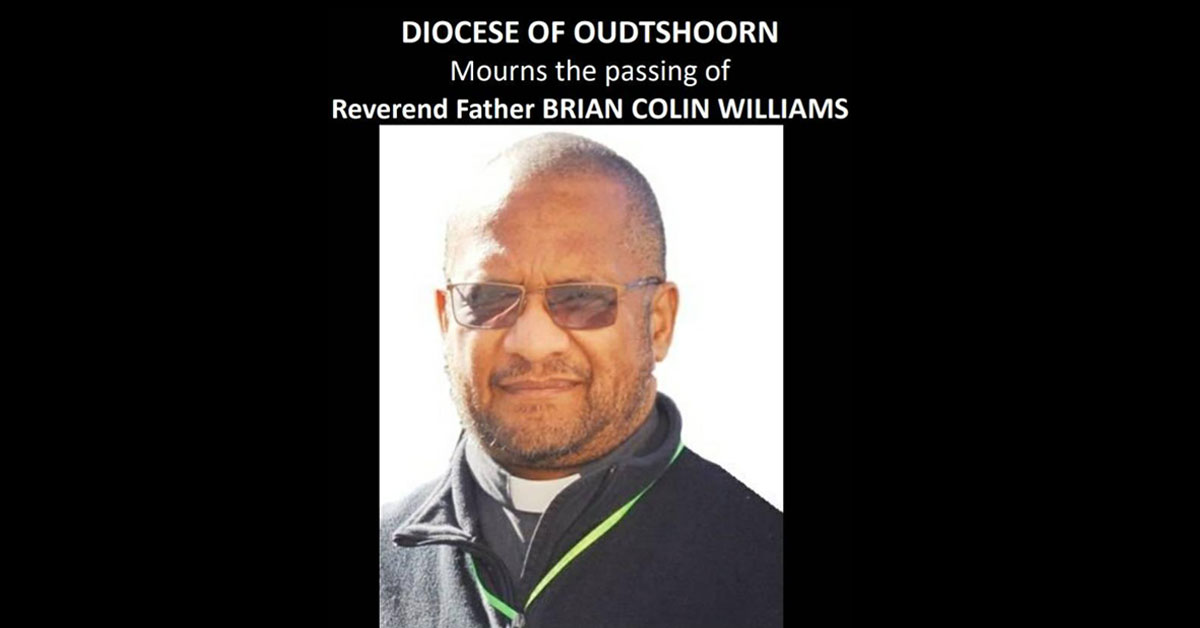 Since the moment that the sad news of Fr Brian Williams’s sudden passing reached us, tributes to him and condolences to his natural and diocesan family started to pour in from across the country.

Fr Williams was born 1963 in Groote Schuur hospital, Cape Town as the 8th and penultimate child of Millie and Richard Williams. According to his sister, Mrs Julia Paris, Fr Brian was raised in the humble Williams home, named San Antonio , number 40 Taaibos Street in Bonteheuwel. It was here where he spent most of his teenage and young adult years. It was here where he was culturally educated on how to be streetwise, have a sense of humour, do ballroom dancing like a professional, learnt to love his neighbour and developed the gift of unconditional friendship.

He attended Boundary Primary School, known as ten Diamonds at the time. His teachers discovered his natural aptitude for music and encouraged it. Lacking the means to take formal music lessons, Fr Brian taught himself to play the guitar and piano. This characteristic of being proactive and resolute would serve him well throughout his life.

During his High School Years at Bonteheuwel High he served on the Student Representative Council. Here he was a sane voice for many dissatisfied youths during those tumultuous years.

After Matric he attended the University of the Western Cape for a year. He then decided to follow his priestly calling and joined the Archdiocese of Cape Town. At the age of 20 he attended Seminary formation in Hammanskraal but realised that he wanted to become a member of the Dominican Order. He was accepted and left Hammanskraal for Lesotho and thereafter Johannesburg and Marianhill where he did his novitiate, first professions and diaconate respectively.

On 1 December 1990 he was ordained to the priesthood in his home parish of St Matthews by the late Cardinal Owen McCann. It was in the community of St Matthews where Fr Brian received practical formation under the tutelage of the then-Fr (later Bishop) Edward Adams and Fr Gabriel Goibaiyer.

Although he loved the Dominican Order, his love of fairness, stubborn clinging to his principles, straightforward address of problems and fight for the rights of the underdog caused him increasing difficulty in his relationship with his Dominican superiors.

In the early 1990s Fr Brian was invited to work for Oxfam. His superiors did not want to release him and made him choose. He chose Oxfam and his love for human rights. This was a big personal sacrifice for him. While working for Oxfam, he witnessed the Rwandan Genocide first hand. During this time he also worked in Nigeria, Kosovo and the Philippines. He learnt to speak French fluently.

His great success also caused him his own deep vocational crises. As an inexperienced manager of a big refugee centre and being overzealous to help all, he had less and less time for his priestly life and ministry. His superiors tried to rein him in and in his determination not to let the refugees down, he lost his Dominican status. In hindsight, he always regretted his stubbornness but not the time and energy which he so generously gave to African refugees.

After leaving the Dominican Order he served in the very poor township of Monyakeng in the Free State where he was much loved. The people there gave him the name of Thabiso meaning, the “bringer of the light”

He joined the Diocese of Oudtshoorn in the late 1990s where he served the communities of Dysselsdorp, Rosemoor, Knysna and Mossel Bay.

When thinking of Fr Brian, the famous “I have a Dream” speech by the late civil rights activist Rev Martin Luther King comes to mind. From his rich life experiences as a youth growing up in Bonteheuwel, his life as a Dominican priest, his experiences of human rights work with Oxfam, and his studies produced in the person of Brian Williams a great human resource which he put completely at the disposal of the local church.

He had many dreams for the diocese and the communities where he worked and he never grew tired of sharing his dreams with us. He had big dreams and he worked hard to realise those dreams.  For some years he oversaw the publication of Oudtshoorn’s diocesan newspaper. This was a great success and only had to be discontinued due to cost factors.

He dreamed about establishing a diocesan pastoral centre, and he laid the groundwork and offered his services for whenever the diocese was ready for this endeavour. He was however multifaceted and served the diocese over the years as youth chaplain, Justice and Peace chaplain, various terms as Dean and Consultor, Family Life and on many other diocesan and national structures and committees.

People remember him as a dynamic priest, a reformer, a great teacher, linguist and liturgist, a campaigner for human rights, offering his voice to the voiceless and marginalised. They recall his academic achievements, his love for singing and the outdoors and his great skill on the ballroom dance floor. He was completely in touch with his own humanity and at home in his own skin. Brian was truly and manifestly multi-gifted.

Fr Brian was above all an evangelist. He spoke about the model of the Church that has to change from a maintenance community to an evangelising community. He did this long before it became fashionable talk among the hierarchy and the laity of the Church and he was passionate about it. He was not a traditional priest in the sense of methodology and pastoral approach. He was creative and he thought out of the box; Qualities which are desperately needed in the context of ministering to a post-Covid Church.

He believed that the Church needs to be where the people are and that pastoral leaders should not wait for people to come to them. This inner drive and conviction while giving him satisfaction, also caused him a great deal of frustration, misunderstanding and rejection because not everyone was ready to embrace this vision or to move at the exceptional pace at which he wanted to see change. He was often challenged by his peers, mostly to test the strength of his convictions. However, he always remained true to his ideals. Fr Brian was a pioneer.

As I spent some time with him doing pastoral work as a young seminarian and again as a newly ordained deacon, I learnt valuable lessons from him about being a servant priest. He took me on long pastoral trips to the far-flung areas of our Diocese’s northeastern border. What struck me was that he wanted to give back dignity to those people on the farms who were often forgotten and disregarded.

He made endless plans to help them to improve their circumstances. Some of which realised and some did not because there simply was never enough time or available resources in order to accomplish everything that he wanted. He was welcomed into every home and could relate with everyone on the basis of their humanity and Christian faith, rich and poor alike, all races and cultural groupings, young and old. Brian was a true pastor.

In his homily delivered during the Requiem Mass on 28 December, Bishop Noel Rucastle aptly applied to him the title of the motion film and play based on the life of St Thomas More: “A man of all seasons”.