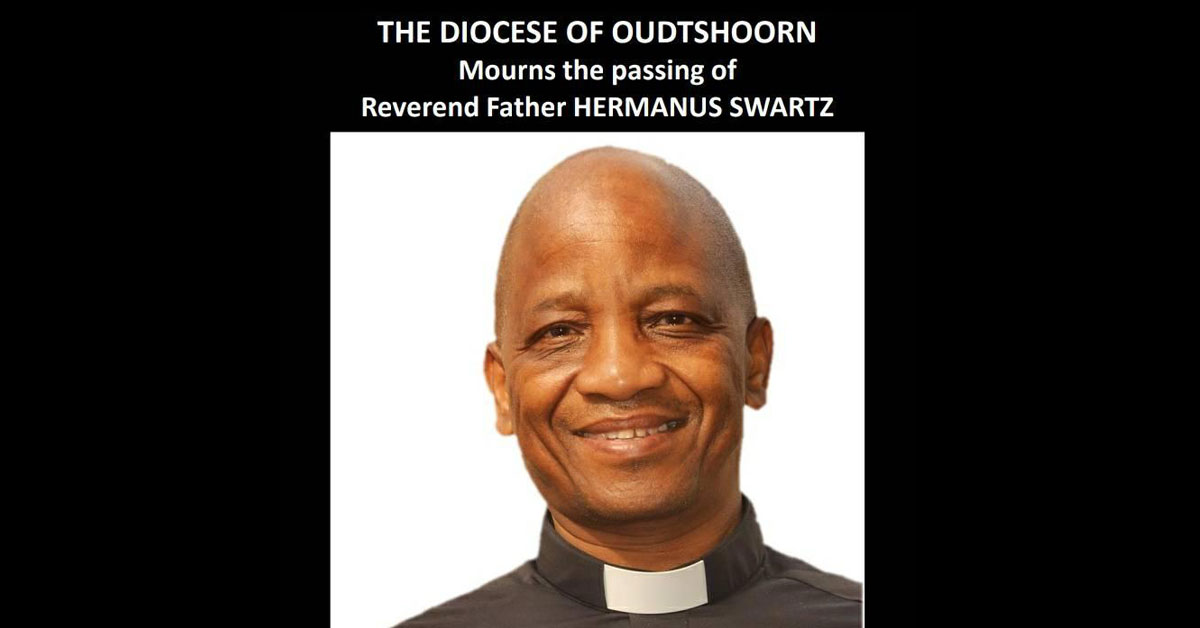 On the evening of 11 December 2020 the news of the sudden death of Fr Manie Swartz passed like a shockwave through the diocese of Oudtshoorn. Fr Swartz had complained of not feeling well. He underwent a Covid -19 test and was awaiting the results at the time of his passing.

He was born to Kiewiet and Susan Swartz on March 11, 1969 in Dysselsdorp. The family was God-fearing and very religious as members of the local St Konrad of Parzham mission station, where domestic and Church life was closely intertwined. He became an altar server at a young age and was an active participant in all Church activities. This laid the foundation for his faith-journey in service of and dedication to God’s people. He attended St Konrad’s nursery and Primary School.

During the forced removals of the apartheid regime, the Swartz family relocated to Oudtshoorn. The young Hermanus continued his education at the Sacred Heart Primary School and completed his secondary education at Bridgton Senior Secondary School. He was a keen soccer player and a member of the local brass band.

During his high-school years, in order to discern a vocation to the priesthood and with the support of his parents, he decided to join the Marianum, a propaedeutic seminary at St Konrad’s Church in Dysselsdorp under the guidance of the late Fr Johannes Rankel SAC.

On Easter Monday 1995, he was ordained, along with Fr Enrico Parry, to the priesthood in St Saviour’s Cathedral of Oudtshoorn by Bishop Edward Adams. Over the years Fr Swartz served the Catholic communities of Knysna, Swellendam, Beaufort-West and Ceres/Wolseley. At the diocesan level, he served as chaplain to the Society of St Vincent de Paul for many years. He was passionate about alleviating the plight of the poor. He also served as the diocesan director of liturgy and a few terms as dean and member of the College of Consultors.

Those who knew Fr Manie describe him as a people’s person. His approach to life was calm and peaceful. He was patient and unrushed in his dealings with people. He was generous with his time, conversation and smile. His siblings describe him as a good listener and advisor and being deeply concerned about the wellbeing of his aged mother and younger brother, who needs constant care.

Throughout the struggles, challenges and ailments of his life, Fr Swartz remained a true pastor and friend to many of the faithful.

He is survived by his mother Susan and seven siblings.

The Requiem Mass was celebrated on December 19 at St Saviour’s cathedral in Oudtshoorn. Bishop Noel Rucastle presided and the majority of the clergy of the diocese of Oudtshoorn was able to concelebrate.