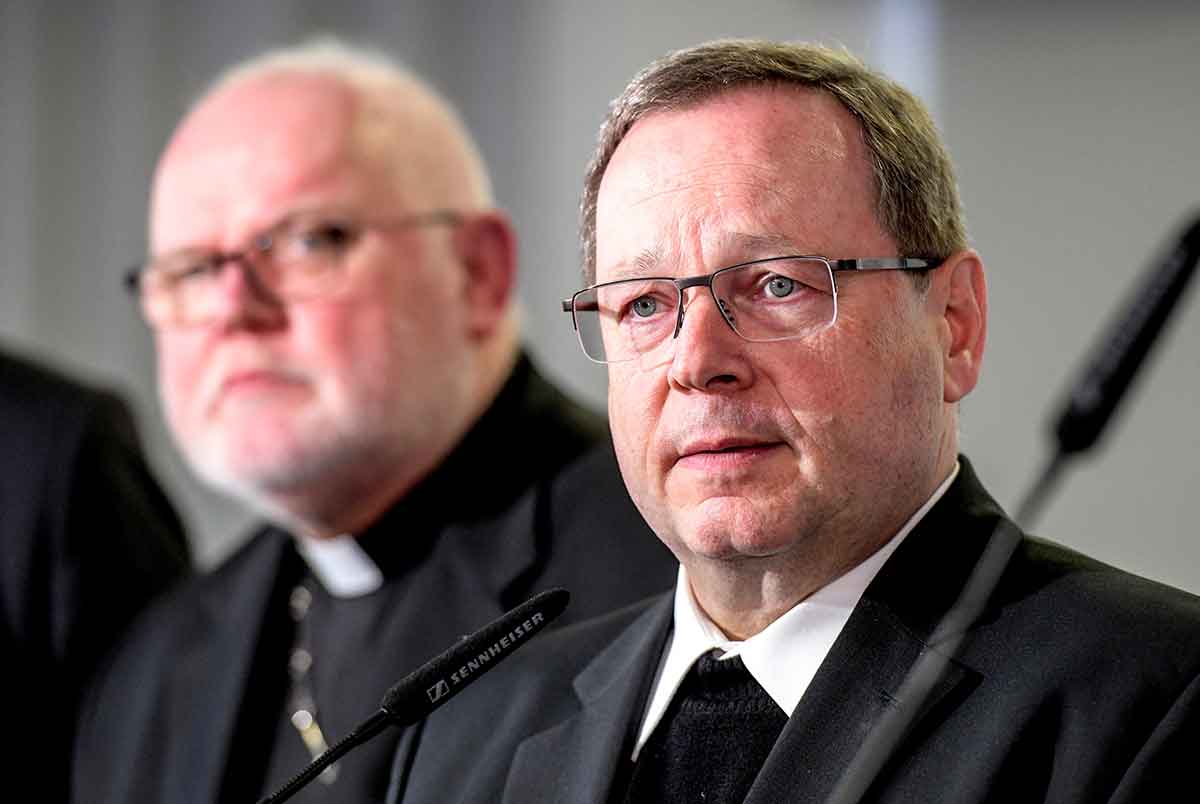 Limburg Bishop Georg Batzing speaks during a March 3, 2020, news conference in Mainz after being elected as the new president of the German bishops’ conference. Bishop Batzing, regarded as an advocate of reforms in the Catholic Church, succeeds Cardinal Reinhard Marx, pictured at left. (CNS photo/Harald Oppitz, KNA)

The first synodal assembly on the future of the Catholic Church in Germany drew both praise and some criticism, with many of the 230 participants lauding what they called a special atmosphere in the debates on key reforms.

Cardinal Reinhard Marx, president of the German bishops’ conference, said the spirit of the talks had been “positive and encouraging” and referred to the synodal path process as a “spiritual experiment,” reported the German Catholic news agency KNA.

Thomas Sternberg, president of the Central Committee of German Catholics, which represents laypeople, said: “No one is disputing the other’s piety here.” A “new image of the church” had been seen in the Frankfurt talks, he said.

But there was criticism too, particularly from Cologne Cardinal Rainer Maria Woelki, who said: “All my fears were confirmed, actually.” He said the synodal path had installed a form of Protestant church parliament, and delegates who were sceptical of the reform process had found it comparatively difficult to have their say.

In an interview with KNA, the cardinal also said the talks had been marred by theological shortcomings.

“My impression is that much of what belongs to theological doctrine is no longer shared here with us, and instead one believes that one can shape the church in a completely new and different way,” he said. Many arguments presented had not been compatible with the faith and teaching of the universal church, he added.

The synodal assembly is the highest decision-making body of the synodal path, an effort by the bishops’ conference and Central Committee of German Catholics to restore trust following a September 2018 church-commissioned report that detailed thousands of cases of sexual abuse by Catholic clergy over six decades. Catholic observers from eight neighbouring countries as well as delegates from other denominations and churches monitored the Synodal Assembly in Frankfurt Jan. 30-Feb. 1.

Bishop Stefan Ackermann of Trier, German bishops’ spokesman on sex abuse issues, told the assembly the church’s handling of the problem has steadily improved and become more efficient, and that further progress had been made since the publication of the abuse study in 2018. Since the beginning of 2020, the guidelines for dealing with and preventing abuse have the status of a church law in all German dioceses.

Subsequent remarks from delegates showed that questions and new issues remain. These include the spiritual and sexual abuse of female members of religious orders; the line between the two is blurred, said Benedictine Sister Philippa Rath. And Archbishop Ludwig Schick of Bamberg stressed that church law could only be applied in addition to state criminal law, but he hinted that, in the future, priests could also be punished with salary cuts and other disciplinary measures. He said the corresponding legislation could be presented this year and voted on by the German bishops’ conference.

In the debates on celibacy, church sexual morality and power-sharing, it became evident that a large majority of participants believed change is necessary.

The church teaches that homosexuals “must be accepted with respect, compassion and sensitivity” and that “every sign of unjust discrimination in their regard should be avoided.” But the catechism also describes a homosexual inclination as “objectively disordered” and homosexual acts as “intrinsically disordered,” because sexuality is “an integral part of the love by which a man and a woman commit themselves totally to one another until death.”

But Archbishop Stefan Hesse of Hamburg distanced himself from church doctrine on homosexuality. He said the church looked down on homosexuals and was not doing justice to same-sex couples who adhered to values such as fidelity, respect and responsibility in their relationships.

Bishop Franz Jung of Wurzburg said he had felt a constructive spirit in the talks. They were not aimed at jettisoning Catholic doctrine but about finding ways to enable it to progress and grow, he said.

Bishop Karl-Heinz Wiesemann of Speyer demanded a cultural shift in the handling of power in the church.

“We need greater transparency and accountability with regard to the exercise of power; we need structurally secured control and participation by all the people of God,” he told KNA. He said he had been impressed by the open atmosphere of the three-day meeting and was optimistic “that we can reach very sensible results in the two years.”

We Are Church, a group that advocates for change in the church, described the meeting as a “hopeful beginning that, however, also gave a hint of the obstacles facing this new type of reform process.” The reform issues were now clearly laid out, it said.

The next synodal assembly will take place in Frankfurt Sept. 3-5, and the first assembly agreed on the rules of procedure and the composition of four working groups.

The groups, made up of 35 members each, will proceed with discussions in the four forums of the reform debate: power, priestly existence, sexual morality and the role of women.

Cardinal Marx said he would inform Pope Francis during his February visit to Rome. He said the spirit of the talks had been “positive and encouraging.”

International observers said the synodal path would have an impact on the church outside Germany too. Some 145 journalists were accredited for the synodal assembly, reflecting the intense media interest in the process.