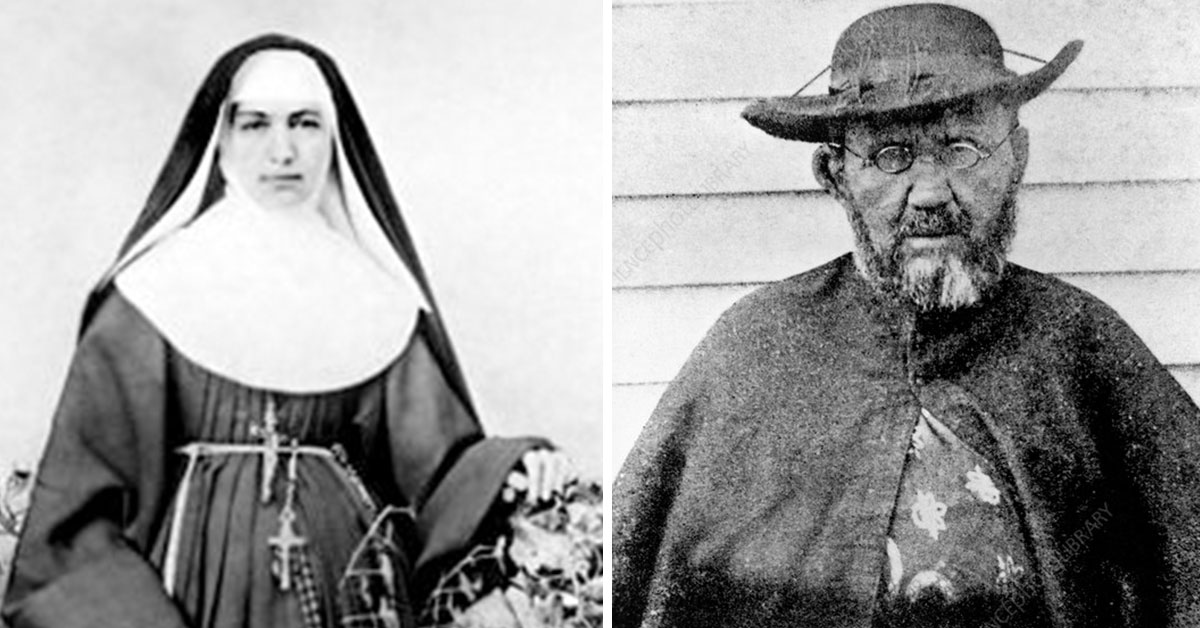 St Marianne Cope and St Damien of Molokai, who both spent their lives ministering to people with Hansen’s disease (leprosy) in Hawaii.

By Carol Glatz  –  Pope Francis has yet to sign decrees in sainthood causes that follow the new path he approved in 2017, that of giving one’s life in a heroic act of loving service to others.

It is still a bit early as the normal sainthood process is never quick, and cases require careful and thorough investigation, study and verification.

For now, some causes of candidates, which could have followed the new path of “the offering of life” but were introduced before the 2017 decree, continue to be pursued and advanced according to the traditional pathway of heroically living the Christian virtues.

A clear example came February 20 when Pope Francis recognised the heroic virtues of three Italian nuns who died of the Ebola virus while ministering to patients in Congo in 1995. A total of six sisters, all nurses and members of the Congregation of the Sisters of the Poor, died over the course of 35 days; the sainthood causes of the remaining three are also being studied.

Sister Linadele Canclini, the postulator general for the congregation, began looking into the possibility of having them declared saints in 2011 and the formal diocesan investigation opened in 2013 in Congo.

In a phone interview from the order’s motherhouse in Bergamo, Italy, she told Catholic News Service that when the new pathway was declared in 2017, she immediately sought advice from another expert on whether they should pursue that avenue instead.

She was advised that they should keep following the path they were on, she said, since they were already so far advanced in having a lot of “strong testimony” and material demonstrating the sisters heroically lived the Christian virtues.

It is important to outline what makes the “offering of life” different from the other pathways, particularly when some criticism emerged after the 2017 decree that it would somehow be “easier.”

For centuries, consideration for sainthood required that a candidate heroically lived a life of Christian virtues or had been martyred for the faith. The third, less common way, is called an equivalent or equipollent canonisation: when there is evidence of strong devotion among the faithful to a holy man or woman, the pope can waive a lengthy formal canonical investigation and can authorise their veneration as saints.

The fourth way, called the “offering of life,” came after the Congregation for Saints’ Causes conducted an in-depth study meant to help interpret many other possible cases of holiness.

Like the pathway recognising the heroic practise of virtues, a miracle attributed to the candidate’s intercession is needed for beatification. And there must be evidence of having lived out the Christian virtues – at least in an ordinary way – before having offered one’s life to others and until one’s death.

This does not necessarily mean the person lived the virtues less heroically, just that there is less burden of proof needed in this regard and more focus is on the nature of their sacrifice, making sure it stems from a serious and consistent Christian life. 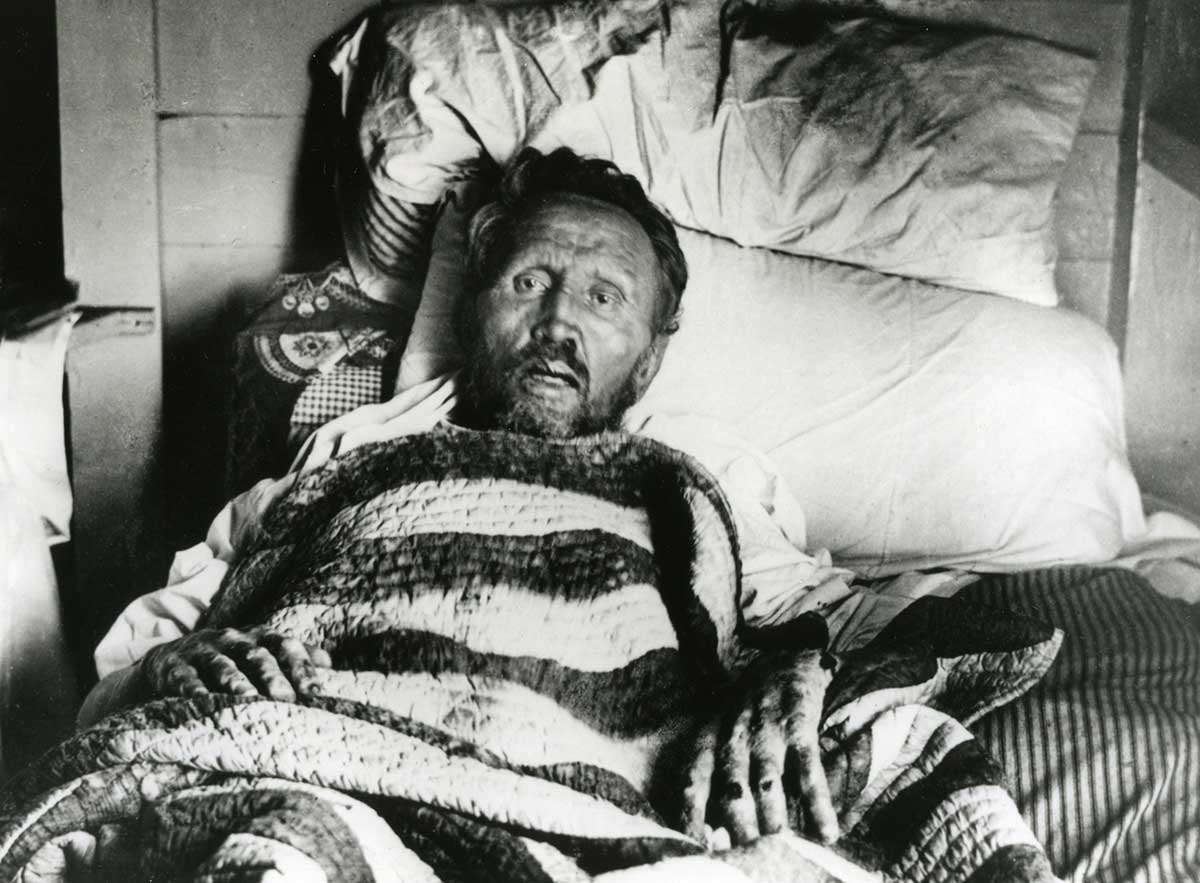 Damien de Veuster is pictured in bed in 1889, shortly before he died at the Kalawao settlement on the Hawaiian island of Molokai. The Belgian-born missionary priest contracted Hansen’s disease, or leprosy, during his 16-year service to an isolated community of people who had the disease. Pope Francis opened a new path to sainthood in 2017 for “martyrs of charity,” those who made heroic sacrifices during pandemics and other situations of contagion. (CNS photo)

Something similar happens with the cause of a recognised martyr where the focus is less on the degree to which the candidate lived the virtues and more on the nature of his or her death, in this case, where the candidate’s blood was shed out of hatred of the faith.

The new pathway puts the focus on the nature of the candidate’s death – that it was a free and willing offer of one’s Christian life and a heroic acceptance, out of love, of a certain and early death.

The required connection between the heroic act of charity and the premature death has meant that a person who follows this model of holiness is often called a “martyr of charity,” a term used by St Pope Paul VI when he beatified St Maximilian Kolbe in 1971 and by St John Paul II when he canonised the Polish friar in 1982.

Pope Benedict XVI referred to St Bernardo Tolomei as “an authentic martyr of charity” in 2009 when he canonised the 14th-century Benedictine, who died of the plague after devoting himself to the sick monks in his care. However, Pope Benedict also emphasised three years earlier that a person could not be declared a true martyr without “irrefutable proof” of the victim’s willingness to die for the faith and without “moral certainty” that the persecutor’s action stemmed “directly or indirectly” from a hatred of the faith.

Pope Francis has used the term “martyr of charity” several times, most recently referring to Father Roberto Malgesini, an Italian priest who was stabbed to death in 2020 by a mentally ill homeless man he was helping.

A “martyr of charity” uses the word “martyr” as meaning “a witness” of charity or of love, Sister Canclini said. “It has evangelical value, but it is not a juridical term, it grants nothing” special since the cause must follow all the regular procedures including a miracle needed for beatification.

Many saints of the past gave that kind of heroic witness, risking their lives in times of contagion; they include St Aloysius Gonzaga, the famed Jesuit priest who died during a plague in Rome; and St Damien of Molokai who assisted those afflicted with Hansen’s disease.

The selfless ministry of those serving during epidemics will never be over, Sister Canclini said.

Sister Canclini said they prayed to the now venerable sisters for their intercession during the pandemic, but they also called on their younger members to help them in the residential facility they operate for the disabled and for the elderly – a facility where, unfortunately many older residents died.

“The younger sisters willingly went to help, aware of the danger because of the spirit of our congregation whose founder said our sisters will work at the service of the poor even in times of contagious diseases,” she said.

Blessed Luigi Palazzolo, who founded the Congregation of the Sisters of the Poor, was born and died in Bergamo in the 19th-century and lived at a time when waves of cholera swept through the region, she said.

“We have testimony that the nuns then were infected taking care of (the afflicted), therefore, we are on the same track. The charism is alive, it will never leave us, it cannot die.”