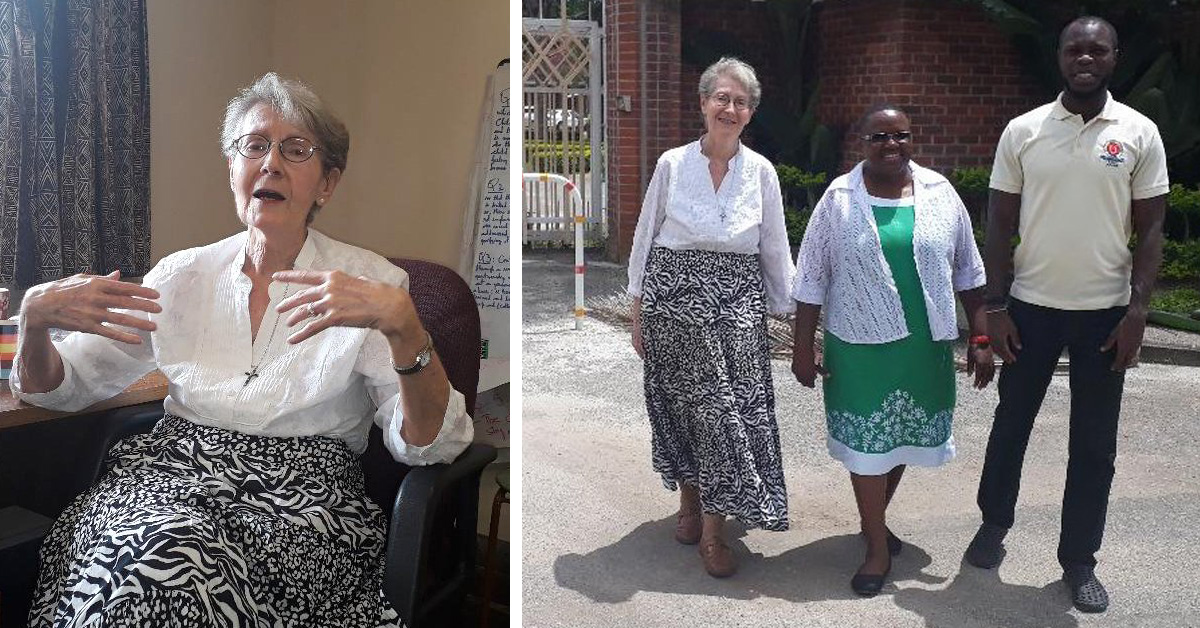 (Left) Maryknoll Sister Janice McLaughlin is seen in her office in this 2019 photo. Sister McLaughlin, who ministered for over 40 years in Africa, died March 7, 2021, in New York at age 79. She also was a former president of her religious community. (CNS photo/Tawanda Karombo, Global Sisters Report)(Right)Sister McLaughlin is seen at Arrupe Jesuit University in Harare, Zimbabwe. (CNS photo/Tawanda Karombo, Global Sisters Report)

By Mark Pattison – Maryknoll Sister Janice McLaughlin, who ministered in southern Africa for nearly 40 years and later became president of her religious order, died March 7 in Maryknoll, New York, at age 79. No cause of death was given.

“Today we lost another great Maryknoll sister,” said Orbis Books publisher Robert Ellsberg in a string of Twitter posts on March 7. Born in Pittsburgh, “her mission vocation was stimulated by pictures of giraffes in National Geographic, and she somehow knew that Africa would be her destiny,” he added.

Orbis published one of Sister McLaughlin’s books, “Ostriches, Dung Beatles and Other Spiritual Masters: A Book of Wisdom From the Wild,” based on her observations of animals native to southern Africa.

“Janice went to Kenya in 1969 to serve in the social communications department of the Kenya Catholic Conference of Bishops,” Father Healey said in a March 7 Facebook post. “We worked together for over 50 years throughout eastern Africa. We shared a passion to train Africans in the different media of social communications and to hand over our ministries to the local church.”

The bulk of Sister McLaughlin’s ministry in Africa was spent in Zimbabwe; she arrived there in 1977, when it was still known as Rhodesia.

After the country won independence from England in 1969, the government proposed a constitution asserting white supremacy and restricting the work of religious groups. Church officials opposed the document and spoke out for the nationalist movement.

Many church people were killed in the war, among them one bishop and 25 missioners, Sister McLaughlin said in a 1997 interview. For her part, three months after arriving in the country to work as press secretary for the Catholic Commission for Justice and Peace there, she was arrested for writing about the country’s liberation struggle.

She was put in solitary confinement for 18 days, and charged with being a communist “subversive.” “Jail was her ‘novitiate,'” Ellsberg said. Despite being in solitary, Sister McLaughlin later said, “I was not alone. I was with the oppressed people, and God was there with us in our prison cells.” She was eventually expelled and returned to the United States.

Back in her home country, Sister McLaughlin wrote a book, “On the Frontline: Catholic Missions in Zimbabwe’s Liberation War.” She returned to the country, renamed Zimbabwe, when Rhodesia’s white leaders ceded power to Blacks in 1980. Eight years later, when St. John Paul II visited Zimbabwe, she served as an extraordinary minister of Holy Communion when the pope celebrated Mass in Harare.

Besides Zimbabwe and Kenya, Sister McLaughlin also ministered in Namibia and Mozambique.

She served one term as president of the Maryknoll Sisters starting in 2009.

During her tenure, the order experienced a jump in vocations. “In the last 20 years, our members are coming from all over the world so it’s much more a global face … so the countries to which we used to send missionaries,” she said in 2014.

“It’s wonderful to see how people can cross boundaries and become at home in another culture and each of those women represents that ability to cross borders and do that,” he said.

“A culture of impunity may be at an end in Salvador, but also in the United States because we were also complicit in the violence that took place in El Salvador in those years of civil war,” Sister McLaughlin said at the time. “We armed and trained the army, but also we gave asylum to some of the perpetrators of the violence.”

“Janice was a missioner to the very end,” Father Healy said. “Her last project in Zimbabwe was to stop human trafficking.”

In a 2019 interview with Global Sisters Report, she spoke of her ministry, done through the African Forum for Catholic Social Teaching, founded in 2002 at Arrupe Jesuit University in Harare to focus on critical domestic issues in nine African nations.

“We want to educate communities so that they are aware of the human trafficking risks that young people are at, especially given the economic difficulties in Zimbabwe,” Sister McLaughlin said. “A lot of people simply expect that their younger people or children will have a better life in the city, but a lot then happens after they leave the rural area.”

“The borders are very porous, and there is so much corruption,” she added. A 2015 conference on trafficking brought about the book “The Scourge of Human Trafficking: Modern-Day Slavery.”

Of those women who escaped labour trafficking and returned to Zimbabwe, Sister McLaughlin said, “they are blossoming, and they are helpful and hard-working. There is a real interest in this issue, and we have educated a lot of people through our workshops and outreach.”