Pope to Confessors: Be People Who Offer Consolation and Mercy

By Carol Glatz – Every confessor should understand he is a sinner, forgiven by God, and he is there to offer his brothers and sisters — sinners, too — the same divine mercy and forgiveness he has received, Pope Francis said.

“The religious attitude that emerges from this understanding of being a forgiven sinner that each confessor must have is peacefully welcoming (the penitent), welcoming as a father” would with a smile, a peaceful look and “offering tranquility,” he said March 12.

“Please, don’t have it be a tribunal, a school exam; don’t be a snoop into other people’s souls; (be) merciful fathers, brothers,” he told a group of seminarians, new priests and priests who hear confessions in the major basilicas of Rome.

The pope made his remarks in the Vatican’s Paul VI hall to those who participated in a weeklong formation course offered each year by the Apostolic Penitentiary, a Vatican court that deals with matters of conscience and coordinates the work of confessors in Rome’s major basilicas.

The pandemic meant the course was held online, which meant nearly 900 priests and seminarians close to ordination from around the world were able to take part in the course – more than the usual 500 when the course is held onsite in Rome.

The pope said the meaning of the sacrament of reconciliation is expressed by abandoning oneself to God’s love, letting oneself be transformed by that love and then sharing that love and mercy with others.

“Experience shows that whoever does not abandon themselves to God’s love ends up, sooner or later, abandoning themselves to another, ending up ‘in the embrace’ of a worldly mentality, which leads to bitterness, sadness and solitude,” he said.

So, the first step to being a good confessor, the pope said, is understanding an act of faith is unfolding before him with the penitent who is abandoning himself or herself to God’s mercy.

“Therefore, every confessor must be able to always be amazed by their brothers and sisters, who, out of faith, ask for God’s forgiveness,” he said.

Laws or rules do not save people’s souls, it is God’s unique and immeasurable love that makes all things new, he said, so the penitent needs to encounter “a ray of this welcoming love” during confession. 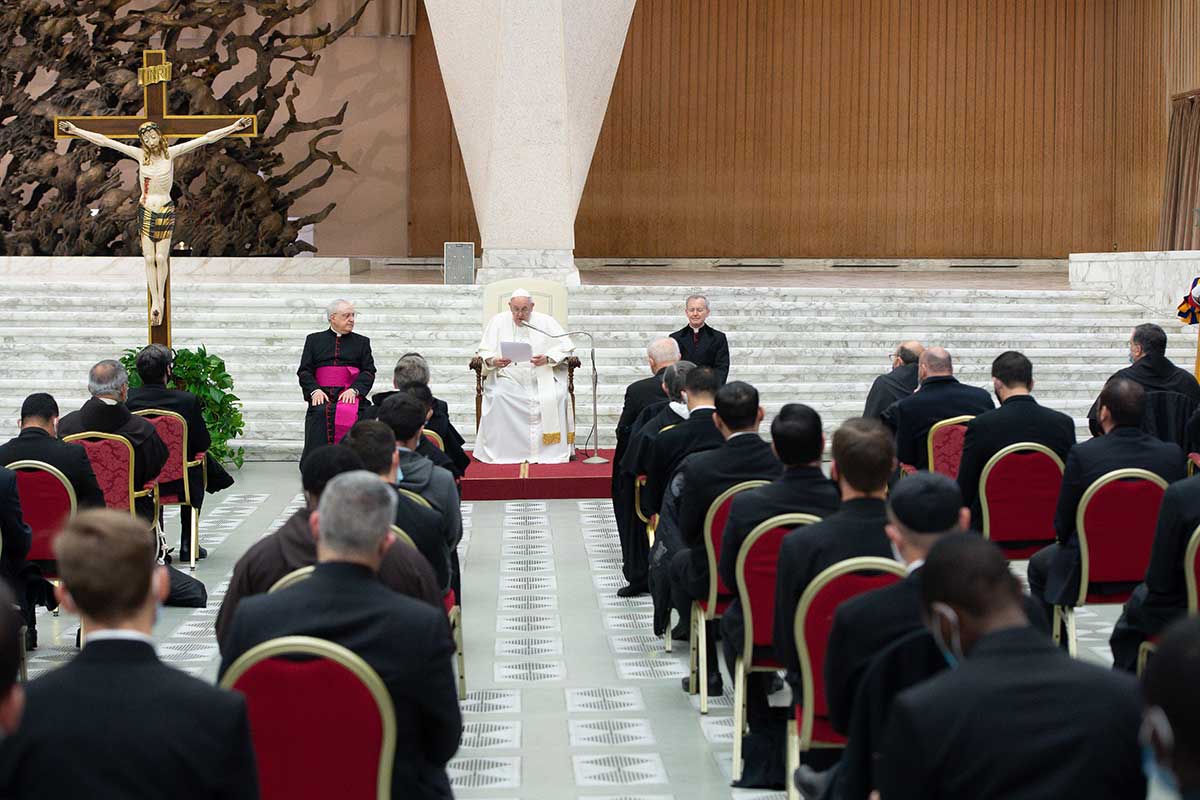 Pope Francis addresses priests taking part in a course on the sacrament of penance organised by the Apostolic Penitentiary during an audience at the Vatican March 12, 2021. (CNS photo/Vatican Media)

Then, they can let themselves be transformed by it and “they begin to live that transformation of a heart of stone to a heart made of flesh,” he said.

The pope said human beings can never match the kind of love the creator has for his creation, but God does show what kind of love is possible – love for one another.

A good confessor will indicate this path, that loving God requires concrete love for others, he added.

However, the essential ingredient of all confessors is knowing they, too, are sinners who have been forgiven “and if one of us does not feel that way, it is better you don’t do confessions.”

Confessors must serve in a way that shows they have encountered God’s miraculous love and it has changed their lives.

Speaking off-the-cuff, he repeated his frequent warning against making confession a form of torture and against asking “indiscreet questions,” digging for details, as if trying to recreate “a film” in their head.

When a penitent is having difficulty in expressing themselves, he said, just say, “Yes, I get it, let’s move on.”

He also warned those who offer confession in Rome’s major basilicas to be more merciful because their ministry should be a great opportunity for people; instead, he said, he has heard that seminarians studying in the city tell each other which confessors to avoid “because he will be like a sheriff and torture you.”

“Word spreads,” he said to laughter. Being merciful does not mean being lenient, “it means being brother, father, consoler.”

Pope Prays For People In Financial Difficulty Because Of Pandemic
Share