Ex-nuncio to SA Cassidy dies at 96 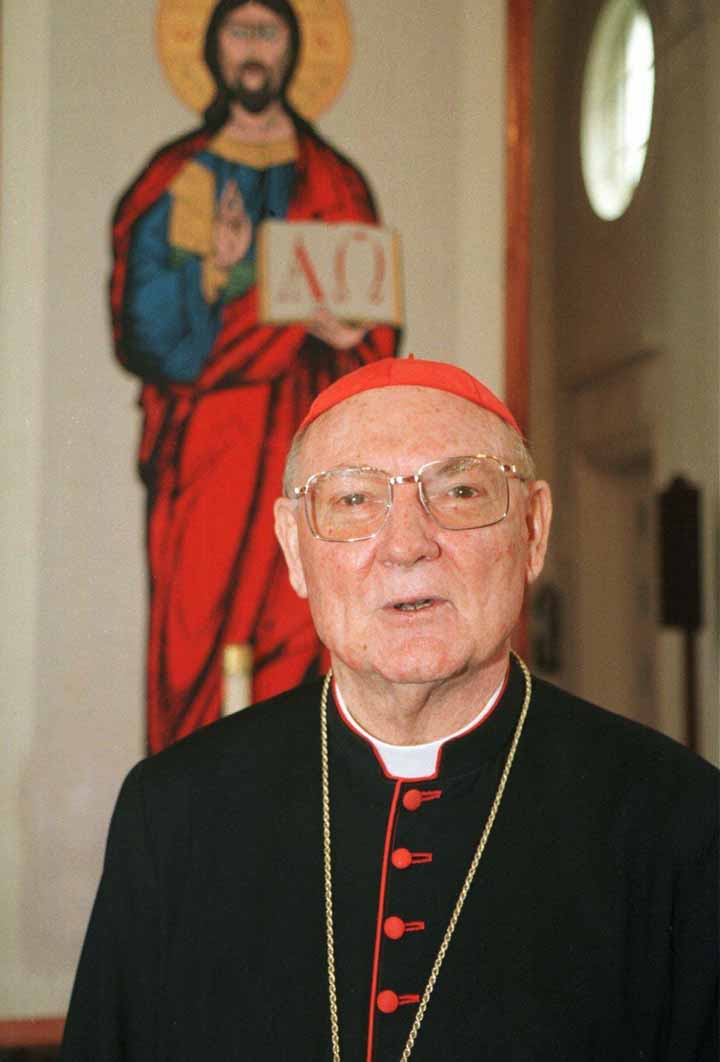 Australian Cardinal Edward Cassidy, who served as the papal nuncio to South Africa from 1979 to November 1984, died on April 10 at the age of 96.

Cardinal Cassidy was a longtime Vatican diplomat and former president of the Pontifical Council for Promoting Christian Unity. He died on Saturday in Newcastle, Australia.

He celebrated his 80th birthday nine months before the death of Pope John Paul II, so was not eligible to vote in the April 2005 conclave that elected Pope Benedict XVI. “I missed the cut by a few strokes, as they say in the golfing world,” Cardinal Cassidy told Catholic News Service at the time. “It would have been a special occasion” to have been part of the conclave, “but you turn 80 and, there you go”.

In 2003, when Pope  John Paul beatified Mother Teresa of Kolkata, Cardinal Cassidy was there, remembering the feisty nun he met in the early days of her Missionaries of Charity when he was secretary of the Vatican nunciature in India from 1955 to 1962. “She was a frequent visitor,” coming to inform the nuncio of her plans and occasionally asking for help, he said. “The nuncio and I kept saying, ‘Go slowly. You are building for the future, build solidly.’”

Cardinal Cassidy returned to Kolkata, India, in 1975 to celebrate Mass with the future saint and her sisters to mark the 25th anniversary of the Missionaries of Charity. “She said, ‘Remember when you used to tell me to go slowly? I always went away thinking, ‘You’d think the representative of the Holy Father and his secretary would have more faith,’” the cardinal said. “That was her little dig at us.”

The cardinal also knew the future Archbishop Oscar Romero. He told the Catholic Outlook, newspaper of the diocese of Parramatta, Australia, “we became very good friends” when then-Mgr Cassidy was on the staff of the nunciature in El Salvador in the 1960s.

When the Catholic Outlook asked him in 2017 what it was like “having friends in high, heavenly places”, the cardinal replied: “I hope they’re looking after me and I hope to join them!” He added: “I don’t have the idea that I’m good enough for that, but I do my best.”

In South Africa, then Archbishop Cassidy was a popular papal nuncio who was keen in his opposition to apartheid, and supportive of the local Church’s activities against it. His term coincided with the detentions and bannings of several anti-apartheid clergy, religious and laity.

Cardinal Cassidy retired at the age of 76 in 2001 after spending 48 years abroad, the last 11 of those years as president of the Pontifical Council for Promoting Christian Unity and as president of the Commission for Religious Relations with the Jews.

As he prepared to return to Australia, he told CNS that widespread participation in ecumenical celebrations during the Holy Year 2000 and Pope John Paul’s visit to the Holy Land that year were “events that would have seemed our dreams” when he took over the office in 1989.

In fact, when he began, the Catholic-Jewish international liaison committee had not met for years. Dialogue was at a standstill because of tensions over a Carmelite convent at the Nazi death camp, Auschwitz, in Poland, and because of papal meetings with Palestinian leader Yasser Arafat and Austrian President Kurt Waldheim, who had been accused of collaborating with the Nazis. 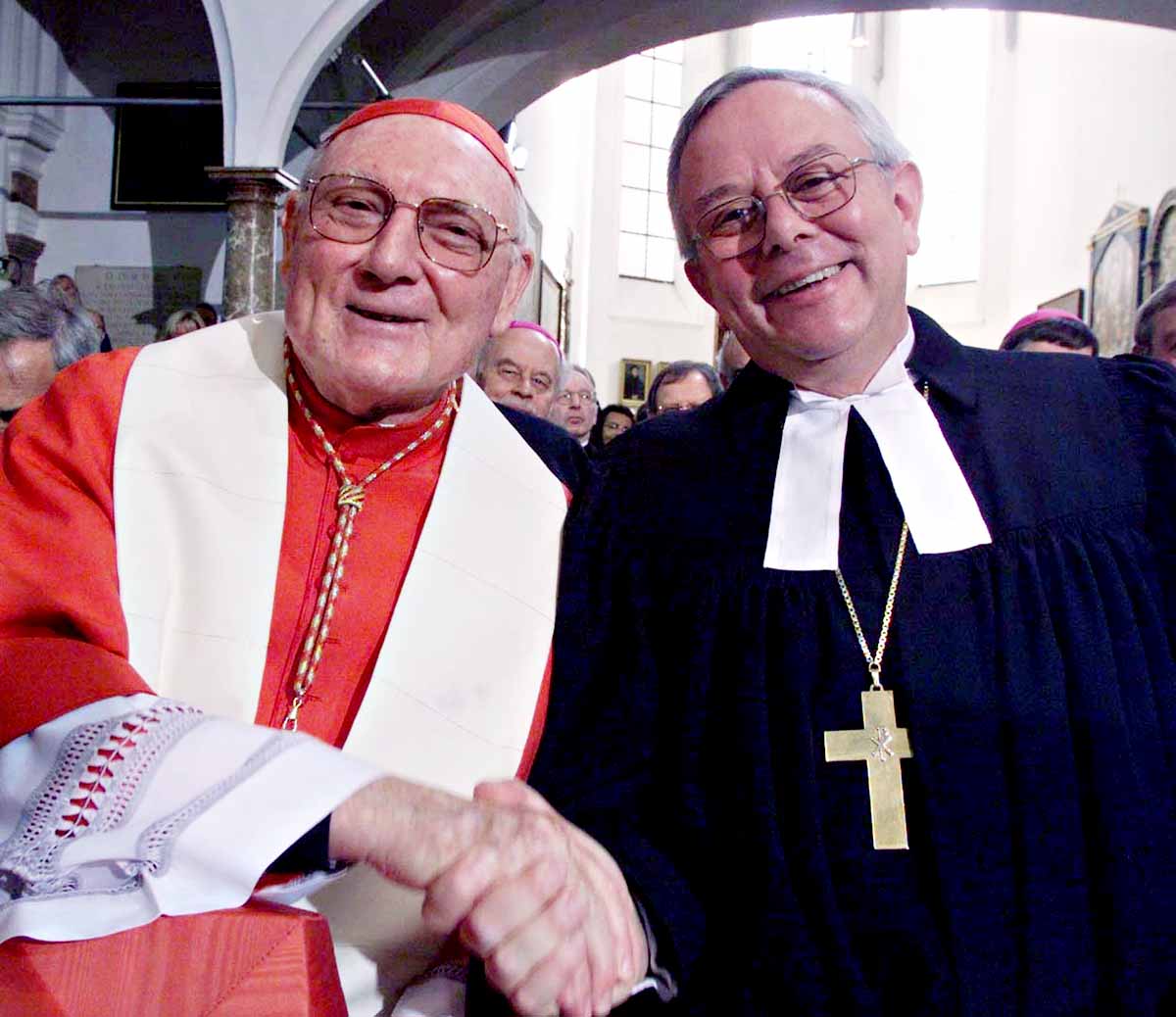 Cardinal Cassidy (left) with German Lutheran Bishop Christian Krause at the signing of “The Joint Declaration on the Doctrine of Justification” in Augsburg, Germany, on October 31, 1999. Cardinal Cassidy, representing the Vatican, and Bishop Krause, president of the Lutheran World Federation, signed the document marking the resolution of a doctrinal dispute that sparked the Reformation. (CNS photo/Ralph Orlowski, Reuters)

Cardinal Cassidy said he was not sure in 1989 that he had the right background to take on the task. He had spent two years as assistant Vatican secretary of state and, before that, 33 years in the Vatican diplomatic corps, serving in Latin America, Asia, Africa and Europe. As it turned out, he said, the experience of living and working in so many countries not only made him who he is, “it turned out to be very good preparation”.

It was not so much that diplomacy was required, he said, but an ability to improve relations by building trust. Cardinal Cassidy said it was especially important for his Jewish partners to know “I wasn’t secretly trying to convert them over to Christianity, but that I was honestly trying to create a relationship and a greater understanding of our two faith communities”.

He said the greatest privilege he enjoyed as the Vatican’s chief ecumenist was signing in 1999 the “Joint Declaration on the Doctrine of Justification” with the Lutheran World Federation, providing a common basis for understanding how people are justified and saved.

Born July 5, 1924, in Sydney, he was ordained to the priesthood in 1949 and served for two years at a parish in the diocese of Wagga Wagga before being sent to Rome for canon law studies.

He earned his doctorate in 1955 from Rome’s Pontifical Lateran University and began his diplomatic service that year, after also finishing his studies at the Pontifical Ecclesiastical Academy, the Vatican’s diplomat training school.

Named an archbishop in 1970, he served two years as the last nuncio stationed in Taiwan. Over the next 16 years, he served as nuncio to Bangladesh, then to South Africa and finally to the Netherlands.

In 1988, Pope John Paul named him substitute secretary of state for general affairs, a position similar to being the pope’s chief of staff. In December 1989 he was named president of the Pontifical Council for the Promotion of Christian Unity. He was made a cardinal in 1991, the first of two former nuncios to South Africa to receive the red hat.—CNS