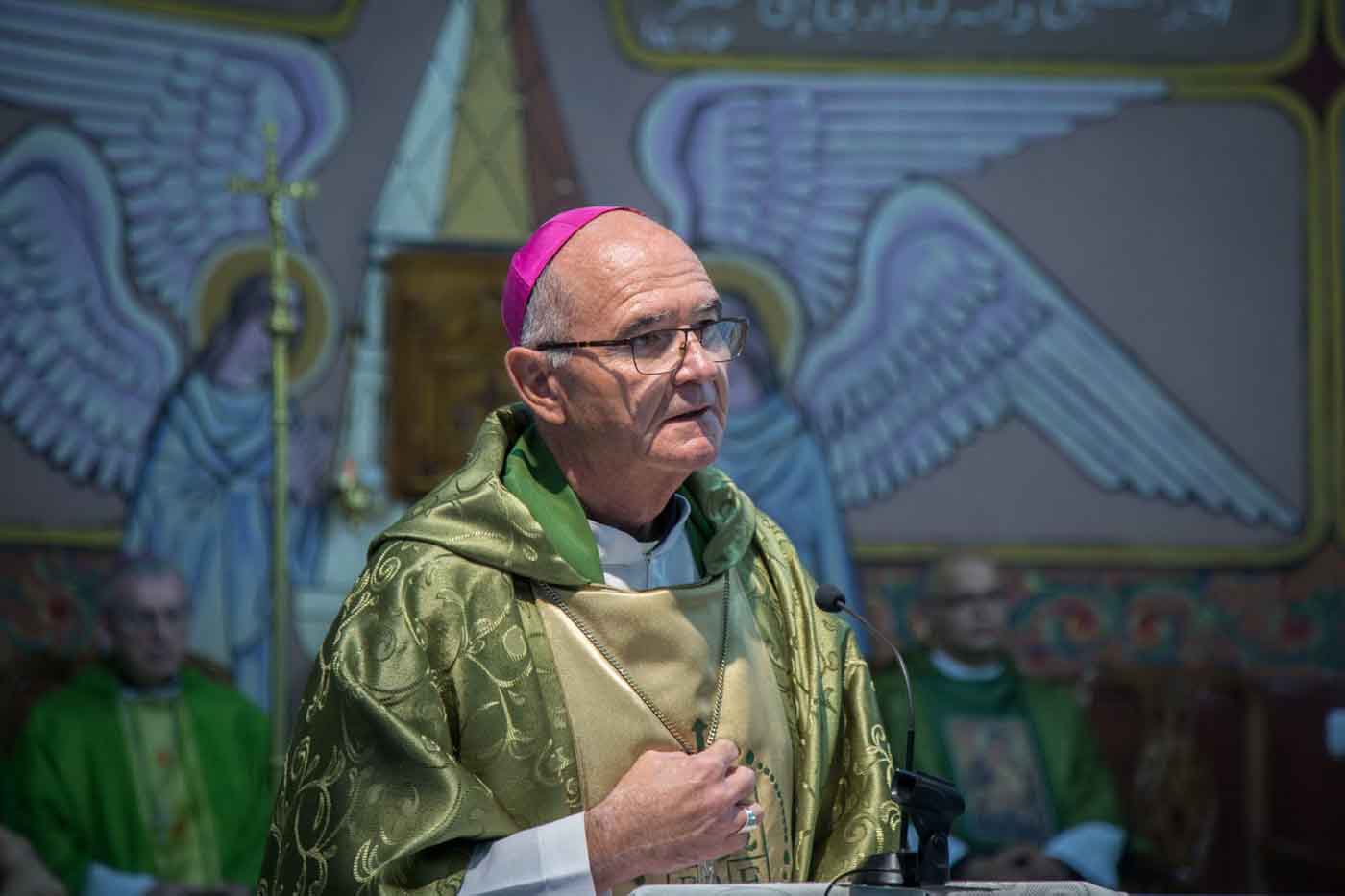 The Catholic archbishop of Cape Town has called for an investigation by the International Criminal Court “into possible war crimes” committed in the Holy Land, so that “appropriate action may be taken against any persons who have committed such crimes and, by doing so, have exacerbated” hostilities between Israel and Palestinians.

Allowing and accepting such an investigation by all parties would be “a step towards peace”, said Archbishop Stephen Brislin. He did not single out any specific party.

His call comes in the wake of international condemnation of Israel’s bombing of civilian targets in Gaza as a war crime. An estimated 230 people, including 65 children, have been killed this month in Israeli airstrikes. Rockets fired by Hamas into Israel that were not intercepted the sophisticated “Iron Dome” air defence system reportedly killed at least ten people.

The international community has also raised concern about the forced removals of Palestinians from the Jerusalem neighbourhood of Sheikh Jarrah, and ongoing confiscation of land in the occupied West Bank.

Archbishop Brislin belongs to the Holy Land Coordination, an international group of Catholic bishops who regularly visit Israel and Palestine, including Gaza. He is also the representative of the Southern African Catholic Bishops’ Conference on the South African Council of Churches’ committee on the Holy Land.

The archbishop stressed that the conflict is not religious. “While it has deep historic roots, it is intensified and is a consequence of the dispossession of Palestinian land and the establishment of Israeli settlements [in the occupied West Bank], the blockade of Gaza, and the separation wall enclosing the West Bank,” he said in a statement. 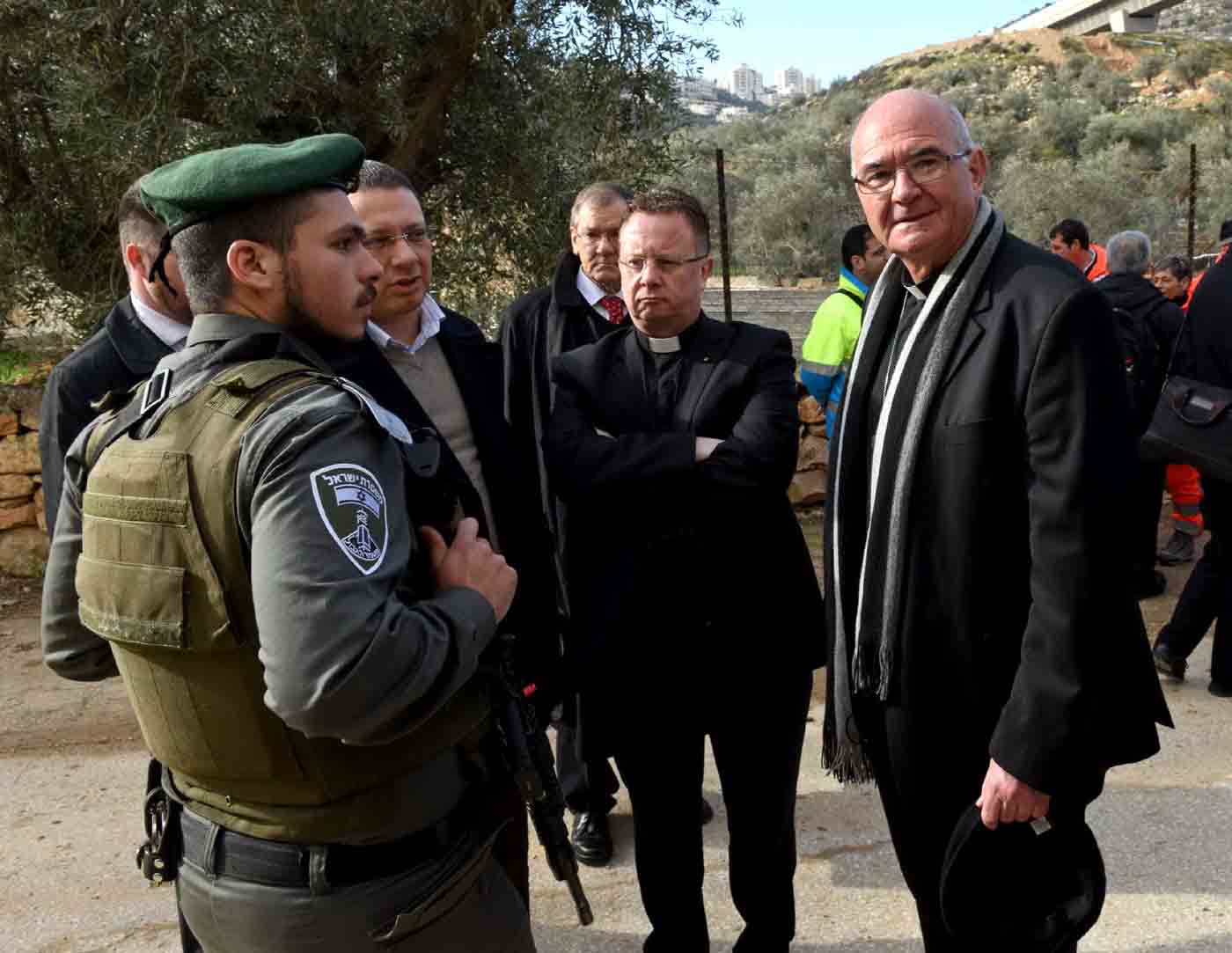 Archbishop Stephen Brislin (right) listens to an Israeli border policeman after he stopped a delegation of Catholic bishops near the Palestinian land in the Cremisan Valley in Beit Jalla, near Bethlehem in the occupied West Bank. Land in the vine-growing area of the Cremisan Valley, including a Catholic property, was seized by Israel for the construction of an illegal settlement. (CNS photo/Debbie Hill)

He noted that people of goodwill and conscience on all sides of the conflict long for peace and “recognise the disproportionate nature of the power and violence”, and are willing to enter into dialogue for peace.

“It is those who make peace who will be considered blessed in God’s eyes,” Archbishop Brislin said. “It is an obligation on all leaders to encourage and facilitate a true peace which…can only arise through truth and justice.”

He appealed to all leaders of the Holy Land “to end the violence, to respect the lives and dignity of all who live in that beautiful land”.

Earlier this the Holy Land Coordination issued a statement after a “virtual journey” to the region by video link-ups, due to Covid-19. Co-signed by Archbishop Brislin with 14 other bishops, it bemoaned the “lack of political progress, along with the relentless expansion of illegal settlements and the impact of Israel’s Nation-State law [which declares Israel a Jewish state, despite 20% of the population being non-Jewish], continues to erode any prospect of a peaceful two-state solution”, and called on the Israeli and Palestinian leaderships to commit to direct negotiations.

Meanwhile, Pope Francis has called on the world’s Catholics to pray May 22 for dialogue, forgiveness and peaceful coexistence in the Holy Land.

As local Catholics were set to gather at St Stephen’s Church in Jerusalem on May 22 to “implore the gift of peace” on the vigil of Pentecost, the pope asked “all the pastors and faithful of the Catholic Church to unite themselves spiritually with this prayer”.