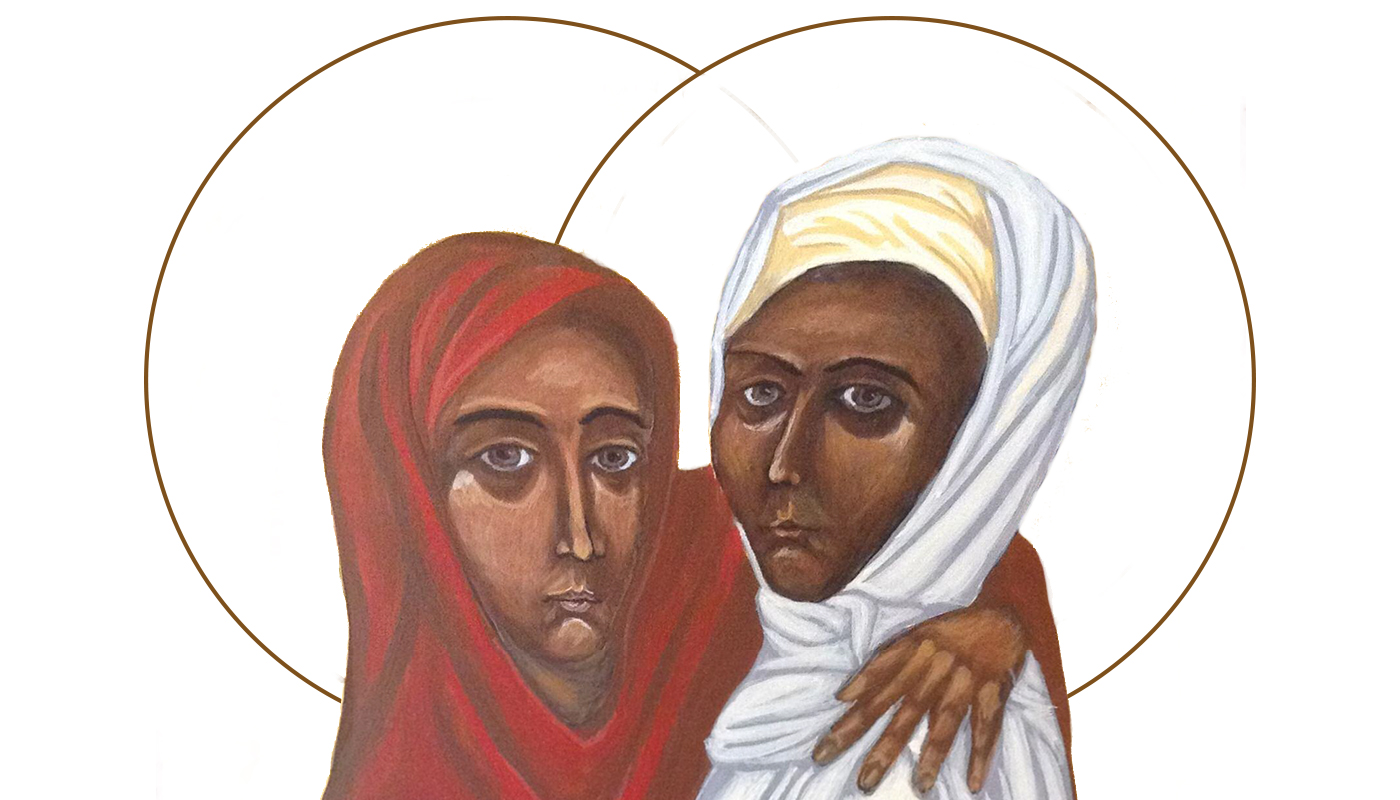 More than 1800 years ago, two women and three men were martyred in northern Africa. Today we know exactly what happened because we have a first-hand account.

Ss Perpetua & Felicity at a glance

There are few first-hand accounts of martyrs in the early Church, much less so by women. This is one of the many things that makes the martyrdom in 203 AD of Vibia Perpetua, her slave Felicity (or Felicitas), and others so fascinating. Other interesting aspects include their background as Africans, and their willingness to subordinate family, and even their babies, to Christ.

Perpetua came from a noble family in Carthage, in modern-day Tunisia, then the Roman province of Africa. We know that she was about 22 at the time of her martyrdom, well-educated, and “honourably married” to an otherwise obscure husband with whom she had a baby. We know from her own account that she had a loving father, a mother, and two brothers (a third, Dinocrates, died at the age of seven).

Perpetua was also about to become a Christian, like her mother and a brother. It was a circumstance that frightened her pagan father, because persecutions of the followers of Christ were rife at the time. She recorded a couple of showdowns with her father, before and after her imprisonment, who begged her to recant. Perpetua refused.

Her father had good cause for concern. Just recently, four Christians — Jocundus, Saturninus, Artaxius and Quintus — had been burnt to death for their faith. But Perpetua’s fidelity to her faith was beyond compromise. She was baptised before her arrest.

Perpetua’s fellow catechumen included her slave, the pregnant Felicity. The others were Revocatus, a slave and possibly Felicity’s husband, and the freemen Saturninus and Secundulus (the latter would die in jail). They were imprisoned, along with their instructor, Saturus, who in an act of solidarity turned himself in as a Christian to the local magistrate. They knew their likely fate: being thrown to wild animals in the circus.

Call a jug a jug

All of them were implored to recant and save their lives. In her writings, Perpetua recounted how she explained to her father even before her arrest why that was impossible. In that encounter, she pointed to a water jug and asked her father: “Do you see that vessel over there? Can you call it by any other name than what it is?” Her father agreed that he couldn’t. “Of course not,” replied Perpetua, “and neither can I call myself by any other name than what I am — a Christian.”

At her baptism, Perpetua was told to pray for perseverance in the trials that were to come. Initially, the prisoners were held in abominable conditions, but bribery by two Christian leaders, the deacons Tertius and Pomponius, secured Perpetua and her companions what she described as “a more commodious part of the prison”. There she was reunited with her baby. At that moment, she wrote, “my prison suddenly became a palace for me”. When the end approached, she entrusted the infant to her mother and brother.

Meanwhile the pregnant Felicity was in a dilemma. Roman law prohibited the execution of pregnant women. Rather than using that to evade her dreadful fate, Felicity was worried that she might be prevented from martyrdom by her pregnancy. So she prayed to give birth before the others would be led away to the circus. Her wish was granted just two days before the group met their death.

As she gave birth, the guards taunted Felicity that her death would be much more painful than the delivery. She told them: “Now I am the one who is suffering, but in the arena, another will be in me suffering for me because I will be suffering for him.” Her daughter was adopted and raised by a Christian woman. 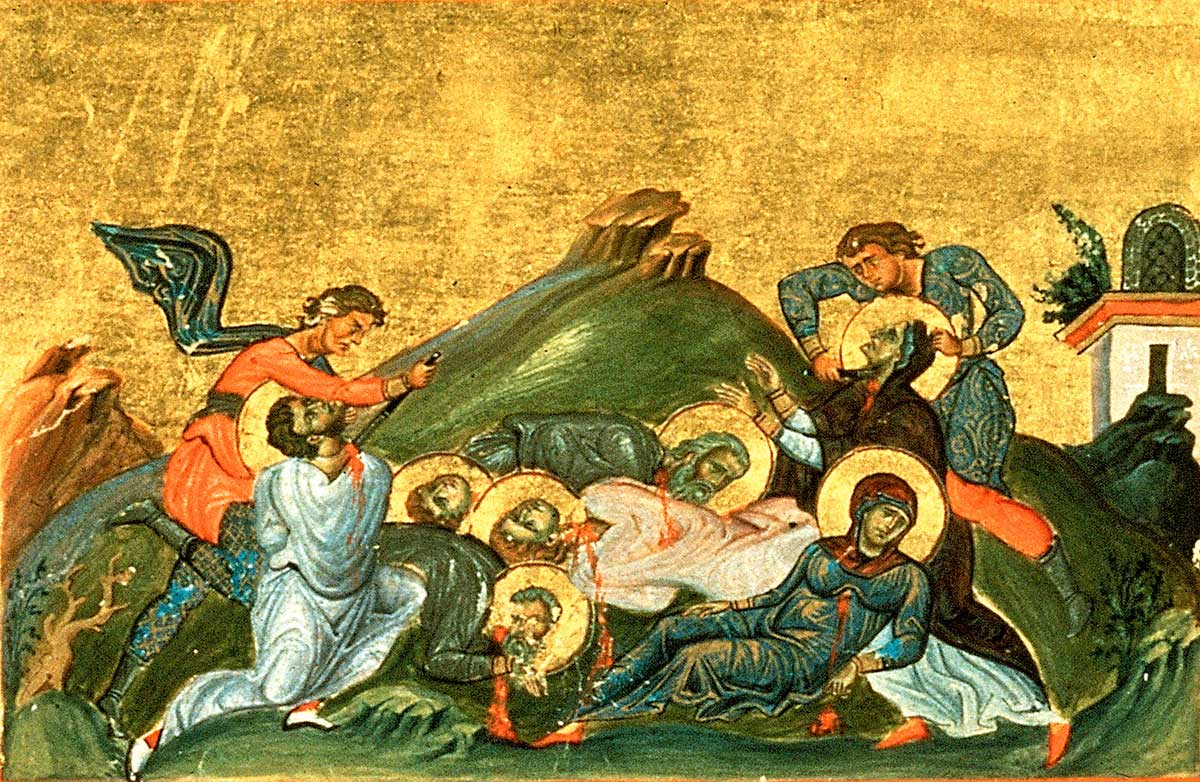 And so came the day of their trial. One by one, they professed their Christian faith and were sentenced to die in the circus. As Perpetua’s turn came, her father appeared, the little baby on his arm, begging one last time for her to recant. Even the magistrate implored her to change her mind. But Perpetua refused.  What they didn’t know was that Perpetua had had a dream which revealed to her how the story would end. We know the details of that dream today because she wrote it down.

In her vision she saw a golden ladder reaching up to heaven. On its sides were swords, hooks and daggers so that those who might attempt to climb up without looking towards heaven would be injured. At the bottom of the ladder, a large dragon tried to scare people away from heaven. Perpetua first saw Saturus go up who warned her about the dragon. She replied: “In the name of Jesus Christ, he will not hurt me,” and the dragon put his head down. At the end of the ladder Perpetua saw a white-haired man milking sheep in a beautiful garden. He welcomed her and gave her curds from the milk. Perpetua awoke from her dream with the sweet taste of the curds still in her mouth.

The rest of the story was written by an anonymous witness (some say it was Tertullian). When the martyrs entered the arena, they were told to change into robes dedicated to pagan gods. Perpetua refused: “We came to die out of our own free will so we wouldn’t lose our freedom to worship our God. We give you our lives so that we won’t have to worship your gods.” They were allowed to keep their clothes.

The martyrs were first tortured: the men were flogged, the women beaten in the face. Then the men entered the amphitheatre. A wild boar, a bear, and a leopard were set on the men. Then Felicity was forced into the arena to face a wild heifer. By the time Perpetua entered, Felicity was already wounded. When they gave each other the kiss of peace, it is said, the beast was no longer in the mood for fighting, and the crowd was losing interest. So the two women were to be put to the sword. Alas, the nervous swordsman was too incompetent to kill Perpetua cleanly. In the end she set the sword to her own throat so that the hapless executioner could finish the job properly.

Before she was killed, Perpetua called out to her brother and other Christians: “Stand fast in the faith, and love one another. Do not let our sufferings be a stumbling block to you.”

The release of Perpetua’s diary, with her non-negotiable fidelity to Christ, caused a sensation among Christians throughout the empire, at a time when religious persecution was a constant threat (as it would be for another century). After Christianity was legalised in 313 AD, a magnificent basilica, now ruined, was built over the tomb of the martyrs, and the Roman martyrology set the feast day of Ss Perpetua and Felicity on March 7.

Ss Perpetua and Felicity are the patron saints of mothers, expectant mothers, butchers and livestock farmers. 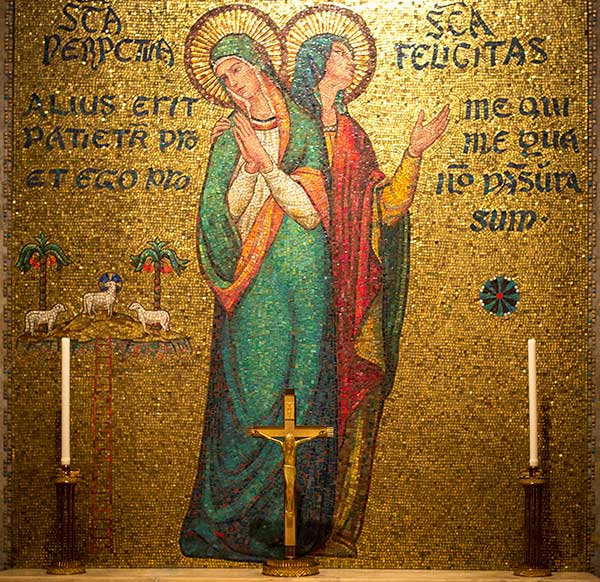 A mosaic of martyrs Perpetua and Felicity in a chapel wall in the basilica of the Immaculate Conception in Washington. Photo: Chaz Muth/CNS

St Perpetua’s Vision, in her own words

One day [in prison] my brother said to me: “Sister, I am persuaded that you are a peculiar favourite of Heaven: pray to God to reveal to you whether this imprisonment will end in martyrdom or not, and acquaint me of it.” I, knowing God gave me daily tokens of his goodness, answered, full of confidence: “I will inform you tomorrow.” I therefore asked that favour of God, and had this vision.

I saw a golden ladder which reached from earth to the heavens; but so narrow, that only one could mount it at a time. To the two sides were fastened all sorts of iron instruments, as swords, lances, hooks, and knives; so that if anyone went up carelessly he was in great danger of having his flesh torn by those weapons. At the foot of the ladder lay a dragon of an enormous size, who kept guard to turn back and terrify those that endeavoured to mount it.

The first who went up was Saturus, who was not apprehended with us, but had voluntarily surrendered himself afterwards on our account. When he got to the top of the ladder, he turned towards me and said: “Perpetua, I wait for you; but take care lest the dragon bite you.” I answered: “In the name of our Lord Jesus Christ, he shall not hurt me.” Then the dragon, as if afraid of me, gently lifted his head from under the ladder, and I, having got upon the first step, set my foot upon his head.

Thus I mounted to the top, and there I saw a garden of an immense space, and in the middle of it a tall man sitting down dressed like a shepherd, having white hair. He was milking his sheep, surrounded with many thousands of persons clad in white. He called me by my name, bid me welcome, and gave me some curds made of the milk which he had drawn. I put my hands together and took and ate them; and all that were present said aloud: “Amen”. The noise woke me, chewing something very sweet.

As soon as I had related to my brother this vision, we both concluded that we should suffer death.

From The Passion of Ss Perpetua & Felicity