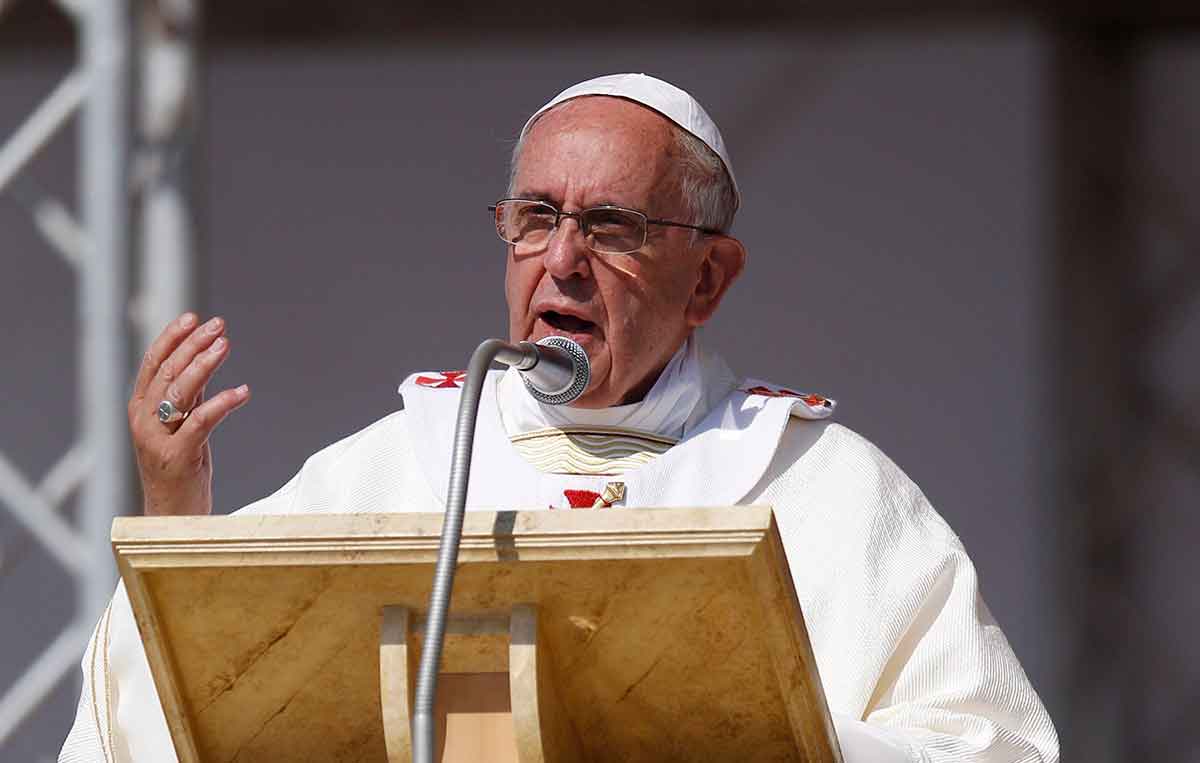 Pope Francis gives a homily during which he said “mafiosi” are not in communion with God and are excommunicated, in this June 21, 2014, file photo from Sibari, Italy. Marking the May 8 beatification of Italian anti-Mafia Judge Rosario Livatino, a Vatican dicastery announced a working group on “the excommunication of mafias.” (CNS photo/Paul Haring)

Marking the beatification of an Italian judge murdered by the Mafia, a Vatican office announced the formation of a working group on “the excommunication of mafias.”

The group, working under the Dicastery for Promoting Integral Human Development, plans to continue and expand work begun by the dicastery in 2018 when it launched an international network against organised crime and corruption.

The dicastery announced the working group May 8, the day of the beatification of Blessed Rosario Livatino, an anti-Mafia judge martyred in 1990 by four members of the crime syndicate known as Cosa Nostra.

During a trip to Sicily three years later, St John Paul II met with Livatino’s parents. At the end of a Mass there, he made global headlines when he decried the suffering and death the Mafia had sown, declaring: “In the name of Christ, I say to those responsible: Convert! One day you will face the judgement of God!”

Pope Benedict XVI, during a 2010 visit to Palermo, described the Mafia as “a path of death,” and Pope Francis, during a 2014 visit to Calabria, said members of the Mafia “are not in communion with God; they are excommunicated”.

Vittorio V. Alberti, who is coordinating the working group on behalf of the dicastery, said that while the pope has said mafiosi are excommunicated and many bishops in Italy and other countries have denied public funerals to notorious members of organised crime syndicates, “we became aware that in the social teaching of church, in canon law and in the catechism there is no mention of the excommunication of mafiosi,” so the dicastery wanted to establish a group to help bishops around the world apply the teaching of the popes.

The group also will promote initiatives to help all Catholics understand that there can never be “any possible compromise” between the church and organized crime, Alberti told Vatican News.

The beatification of Blessed Livatino, a martyred judge who devoted much of his professional life to rooting out the Mafia, “sends a very powerful message to affirm that the Mafia has nothing to do with the Gospel and therefore with the church,” Alberti said. The dicastery wants “to affirm once and for all that it is not possible to belong to the Mafia and be part of the church.”

Pope Francis meets with Cardinal Pell at the Vatican