Healing People with Generosity: 13th Sunday of the Year 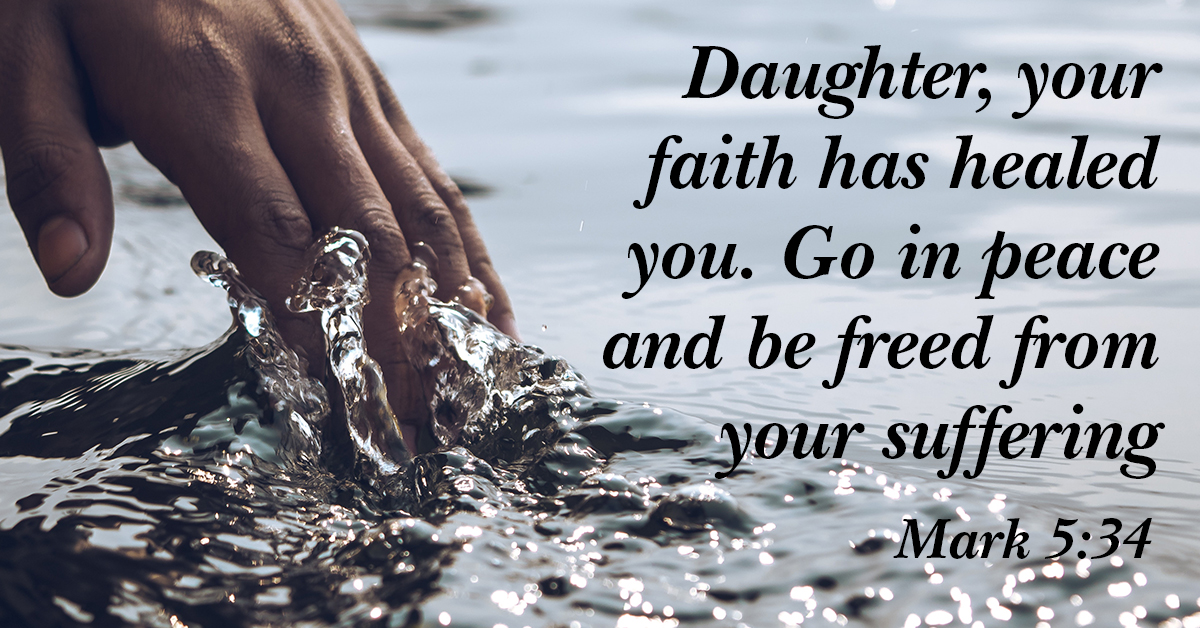 Theme: The God of Life: Healing People with Generosity

Point of reflection: God is always on the side of life: today’s Scriptural readings convey a most profound message about God’s intentions to share his own eternal life with humanity by generous healing. The book of Wisdom stated that this was God’s intent from the beginning of creation. When this life was disrupted, God sent His Son into the world to defeat death and reopen the path to eternal life for his faithful. The very Son of God is generously healing the people in the Gospel of today. This is well reflected in all the readings of today:

Sermon (Reflection): Today’s Scriptural reading calls for reflection on one of the most important human virtues that connect us to others in our communities – Healing with generosity. The capacity and willingness to gratuitously share is valued in all cultures; it stands out as a hallmark of an admirable and respectable person. God himself sets the benchmark for generosity. In the first reading, we are reminded that God did not just create us and leave us on our own.

Rather he continues to share his life with us and calls us to live in his presence each day so that we can truly enjoy the abundance of his life. This obliges us to share that very life with others. God also shared with us his Son, whom he sent as the saviour and redeemer. This was an act of selfless love at its highest – to offer one’s child so that others might live. Indeed God shared what was most precious and valuable with His creatures, thus, to restore life.

The book of Wisdom (1:13–15, 2:23–24) was addressed to the Jewish people living in the Egyptian city of Alexandria in the 1st century BC. The Jews who lived there were greatly influenced by this highly developed, engaging, and attractive environment. One of the main issues the book of Wisdom addresses is the Jewish concept of God. In today’s passage, the author of Wisdom alludes specifically to the story of creation, asserting that God did not create people to serve him in fear, and eventually to die. On the contrary, God created humanity and shared with his creatures that which belongs to his very essence – life itself. God brought people into existence intending them to have unending life in his presence. Since God is eternal, the life he created was meant to be everlasting.

Death and corruption were never a part of God’s design. The envy of Satan, God’s rebellious creature, who apparently did not want humanity to share God’s immortal life, interfered with God’s design and introduced evil and death. The text will go on to assure the reader that this Satanic and deadly interference will not last. Israel’s God is the God of life, and that life will prevail. Unlike the capricious and often destructive pagan gods, this one true and living God wills to gift his people with that which is most precious – life itself.

As Christians, we don’t need to fear death because God is God of life and He heals and this is manifested in the Gospel of today.

The Gospel reading (Mark 5:21–24, 35–43) recounts a captivating story of Jesus restoring a dead child to life. Such accounts are found in all four Gospels, which highlights their importance and connection to the creation account in the book of Genesis and statements in the book of Wisdom read today. Death was never intended by God, and God’s Son, Jesus, manifest His divine power in reversing the effects of death and restoring life. Jesus’ call to Jairus, “do not fear, only believe”, compellingly declares that faith in him as the bringer of life conquers death and neutralises the most paralysing of human fears. The word we need to adopt today as Christians is “do not fear, only believe”, we need only to believe and renew our faith in Christ and it is Christ who heals and gives life.

Notably, this and other Gospel stories of this type are stories of resuscitation. The individuals whom Jesus brought back to life will die again; the reversal of death in such cases was temporary. Therefore, such resuscitation was not the true purpose of Jesus’ mission, and He commanded that such acts be kept secret. His mission was far greater than merely reviving people.

His purpose was the conclusive defeat of death, and the restoration of humanity to the unending and incorruptible life that God intended for it at creation, so that no one would have to die again. Jesus would accomplish this decisive goal through his death and resurrection. The story in today’s Gospel anticipates the final defeat of death and the definitive restoration of life. Jesus came into the world bringing God’s supreme gift, the gift of God’s own unending life bestowed on those who join themselves to Him through faith.

In the second reading(Cf. 2 Corinthians 8:7, 9, 13–15), the apostle Paul addresses the problems raised by his project of collecting money to aid the struggling Christian community in Jerusalem. Apparently, members of the Corinthian community to which he wrote, initially pledged support, but later backtracked on the promise and did nothing.

Paul wrote to these apathetic Corinthians appealing for a restart of the collection. He began by reminding the Corinthians about the riches they had freely received. These were not material benefits but the spiritual gifts – faith and knowledge of the Gospel, which Paul had shared with them gratuitously, out of love. Their faith came as a gift of Christ delivered through Paul’s apostolic efforts.

Paul intended to spur the Corinthians to action by appealing to the example of Jesus himself. His coming into the world was an act of utmost generosity. As the divine person, Christ enjoyed “riches” of untold value. Yet he chose to forego these riches and became “poor” for the sake of the people. Elsewhere, Paul referred to Christ’s coming into the world as an act of “self-emptying” (see Phil 2:6), supremely expressed by offering his life for the salvation of the world. Jesus became “poor” because he had given himself unreservedly and completely for his people.

Therefore, Jesus’ mission in the world was an act of supreme generosity by a divine person, willing to live an ordinary human life, and then undergo death, so that others might live.

Paul’s second argument considers the relationship between the Christian communities in Corinth and Jerusalem, reflected in the phrase, “your present abundance and their need”. Paul alludes here to the struggling community in Jerusalem, impoverished and persecuted, and the relatively wealthy and secure Corinthian community which overflows with spiritual riches. For Paul, the Jerusalem Church is the mother church for all the Christian communities he founded.

The Gospel flowed out from Jerusalem, carrying the uncountable spiritual riches of faith and hope to all peoples. Writing this, Paul appeals to the Corinthians’ sense of fairness. Having been brought into the life of faith by the Jerusalem community, the least they ought to do is match this invaluable gift with some material support.

Such support would be a gesture of acknowledgement and recognition of what they have received. The Jerusalem community shared with the world its most precious treasure – the message of salvation and the deposit of faith. This act of generosity brings with it the supreme gift of God’s salvation, which the Corinthians now behold.

Christian Act in Word of God “Being Generous”

As God’s children, we are also obliged to share both our spiritual and material riches with others. Paul the apostle was fully aware of this when he exhorted the Church in Corinth to assist the needy Jerusalem community, from whom they had received the most precious gift of faith. Like the Corinthians, we owe gratitude to those who shared, and who continue to share, their spiritual riches with us. These could be teachers, mentors, ministers in our Churches, our parents, our faith communities.

Today’s liturgy calls for the recognition of these individuals and groups who gave us the gift of faith, and who shaped our personalities according to Christ’s teaching. We are called today to manifest our gratitude to them in some tangible ways.

For us Christians, generosity is not an option, it is a necessity grounded in our faith. There is a tendency to underestimate what we can do and what influence we can have on others. However, even the small and seemingly insignificant things can have great effect and far-reaching impact. Even putting a smile on someone’s face may give them hope which they may be losing because of the challenges that have befallen them. Just as Jesus in today’s Gospel gave life to the little girl, so are we called to be promoters of life. We might not be able to do it in quite the same way as he did, but our small acts of generosity go a long way to igniting and reinvigorating the lives of others.

As God’s creatures, we all carry the seeds of life in our hearts. Today we are reminded that these seeds bear fruit by our acting generously and sharing ourselves with others. Let us allow those seeds to bloom. There is an African saying which states that “however little food we have, we will share it even if it’s only one locust.” Even our small seeds of life can bring great fruits if sown with the right intention of making life spring up in our midst.

Action: From today, I should not fear death but only to have faith and believe in Jesus Christ who is the restorer of life. From today, I need to be generous and share the little I have to the less privileged.

Prayer: God our Father, help me to restore my life and have faith in your Son Jesus Christ.  Help me to be generous and offer to others the little that I have for the common good of others. Bless me with a heart to be a good Christian. We ask this through your Son who lives and reigns with you forever and ever, Amen.