Pope: Jesus Prays for us Constantly 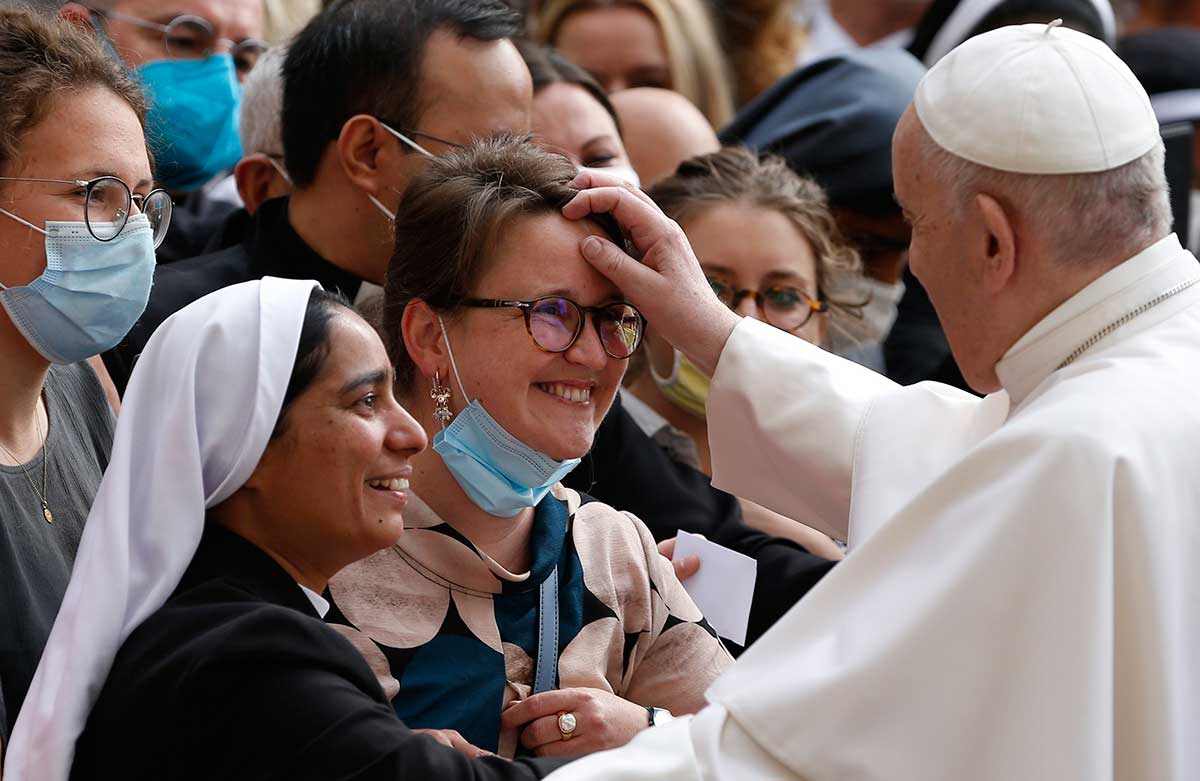 Pope Francis greets a woman during his general audience in the San Damaso Courtyard of the Apostolic Palace at the Vatican on June 2, 2021. (CNS photo/Paul Haring)

By Junno Arocho Esteves  – Christians can rest assured that in moments of trial, suffering or even sin, Jesus is interceding for them before God, Pope Francis said.

“Even if our prayers were only mutterings, if they were compromised by a wavering faith, we must never stop trusting in him,” the pope said June 2 during his weekly general audience.

Arriving in the San Damaso Courtyard of the Apostolic Palace, the pope spent some time greeting pilgrims, blessing children and religious articles.

Continuing his series of talks on prayer, the pope reflected on how prayer was fundamental to Christ and his mission, especially when it came to choosing his disciples.

Recalling St Luke’s account of Jesus praying the day before he chose his disciples, the pope said that “judging from how those men were to behave, it would seem that the choice was not the best because they all fled, they left him alone before the Passion.”

However, “it is precisely this – especially the presence of Judas, the future traitor – that demonstrates that those names were inscribed in God’s plan,” he said.

Jesus’ moments of prayer on behalf of his disciples, especially for Peter who would deny Christ, were an act of love that showed that even in times of failure, “the love of Jesus does not stop,” the pope continued.

“Jesus’ love and prayer for each of us does not stop, indeed it becomes more intense, and we are at the centre of his prayer!” Pope Francis said. “We must always remember this: Jesus is praying for me; he is praying now before the Father and he is showing him the wounds he bore, so that the Father can see the price of our salvation; it is the love that he has for us.”

Reflecting on other moments in the Gospels, including Peter’s profession of faith and the Transfiguration, the pope noted that the “great turning points of Jesus’ mission are always preceded by prayer.”

Jesus, he added, “not only wants us to pray as he prays, but assures us that, even if our attempts at prayer are completely useless and ineffective, we can always count on his prayer.”

Departing from his prepared remarks, the pope recalled a bishop who told him that during a time of great trial, he looked up in St. Peter’s Basilica and saw Jesus’ words at the Last Supper: “I have prayed for you, Peter.”

“That gave him strength and comfort,” the pope said. “And this happens every time any of us knows that Jesus is praying for him or her. Jesus prays for us. Right now, in this moment.”

Pope: Ask Jesus to Pray for You When You Can’t

In Times of Trouble, the Church turns to Prayer with Mary