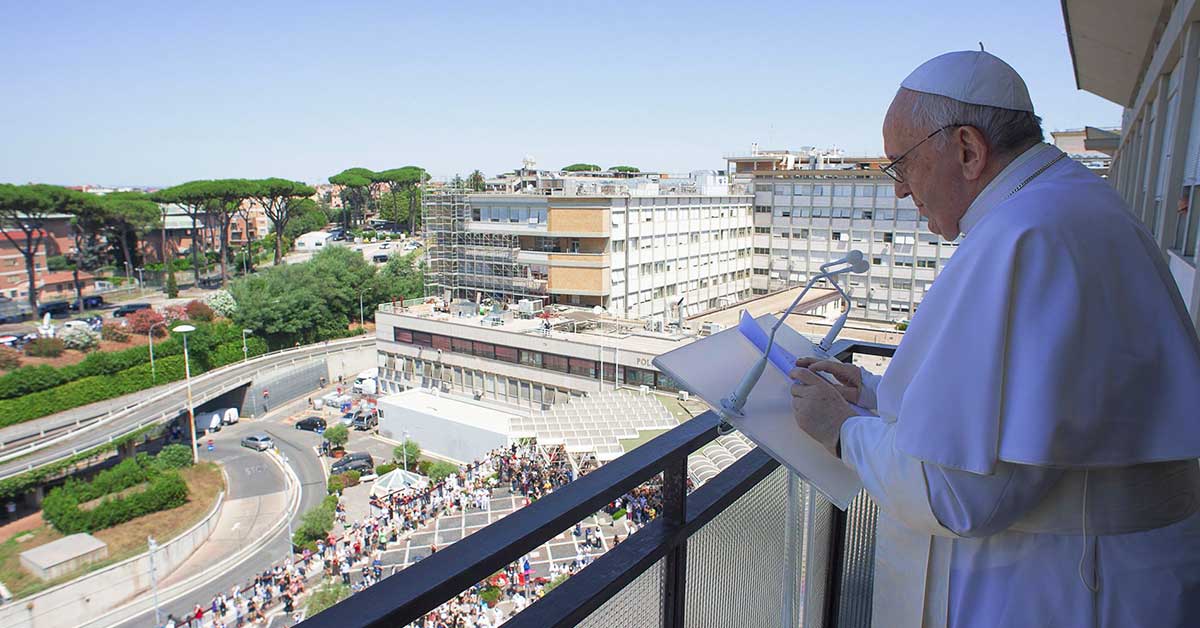 Pope Francis leads the Angelus from a balcony of Gemelli hospital in Rome on July 11, 2021, as he recovers following scheduled colon surgery. (CNS photo/Vatican Media via Reuters)

By Junno Arocho Esteves – Pilgrims and well-wishers gathered at Rome’s Gemelli hospital to greet Pope Francis as he made his first public appearance in a week after undergoing intestinal surgery.

Appearing on the 10th-floor balcony of his suite of rooms at the hospital July 11, the pope was greeted with applause and shouts of “Viva il papa” (“Long live the pope”) from the crowd that stood under the scorching midday sun to see him.

“I thank you all,” the pope said. “I have felt your closeness and the support of your prayers. Thank you very much.”

Pope Francis arrived at Gemelli hospital on July 4 to undergo “a scheduled surgical intervention for asymptomatic diverticular stenosis of the colon,” the Vatican said. The pope has recovered steadily from his surgery and resumed working from the hospital.

Among the well-wishers outside the hospital was Liliana Valina who, like Pope Francis, is a native of Argentina living in Rome.

Draped in the Argentine flag after the country’s July 10 win against Brazil in the Copa America soccer championship, Valina told Catholic News Service that she was there “because I care for this pope very much and not just because he’s from Argentina like me.”

“I think he tells Jesus’ message in a clear way, even on things that are uncomfortable for some,” she said. “I came here hoping that he recovers soon, that he be healthy.”

When asked what she would tell her fellow countryman if she could speak directly to him, Valina said: “Never feel alone because you have God and you have many people who love you and are with you.”

Marlene Barbosa, a native of Peru living in Rome, also was outside the hospital with her husband, Maximo Lopez, as well as her mother, Susanna Morante, who travelled from Washington, D.C., to be with her family and have a chance to see the pope.

“We wanted to see him and receive his blessing because we are Catholic, we are believers and through prayer, we have been close to the pope in these days in which his health has been delicate,” Barbosa told CNS.

“We are with him, we are always praying for him so that he will recover completely,” she said. “We love him, all of Peru loves him and the whole world loves him.”

In his address, the pope reflected on the Sunday Gospel reading from St. Mark, in which Jesus sent out his disciples to anoint the sick with oil and heal them.

The oil, he said, not only represents the comfort given through the sacramental anointing of the sick, but also symbolises “the closeness, the care, the tenderness of those who take care of the sick person.”

“It is like a caress that makes you feel better, soothes your pain and cheers you up. All of us, everyone, sooner or later, we all need this ‘anointing’ of closeness and tenderness, and we can all give it to someone else, with a visit, a phone call, a hand outstretched to someone who needs help,” he said.

Pope Francis said that his time in the hospital gave him the opportunity to experience “once again how important good health care is” and that free, universal health care, especially for the most vulnerable, is a “precious benefit (that) must not be lost.”

Acknowledging that some hospitals run by the church face the threat of closure “due to poor management,” the pope said the Catholic Church’s vocation “is not to have money; it is to offer service and service is always freely given.”

“Do not forget this: save free institutions,” he said.

Before praying the Angelus prayer with the faithful, Pope Francis expressed his “appreciation and encouragement” to the doctors, nurses and staff at Gemelli hospital. He also asked for prayers for the patients, especially the children, at the hospital, several of whom stood on the balcony with him.

“Why children suffer is a question that touches the heart. Accompany them with prayer and pray for all those who are sick, especially for those in the most difficult conditions,” the pope said. “May no one be left alone, may everyone receive the anointing of listening, closeness, tenderness and care.”