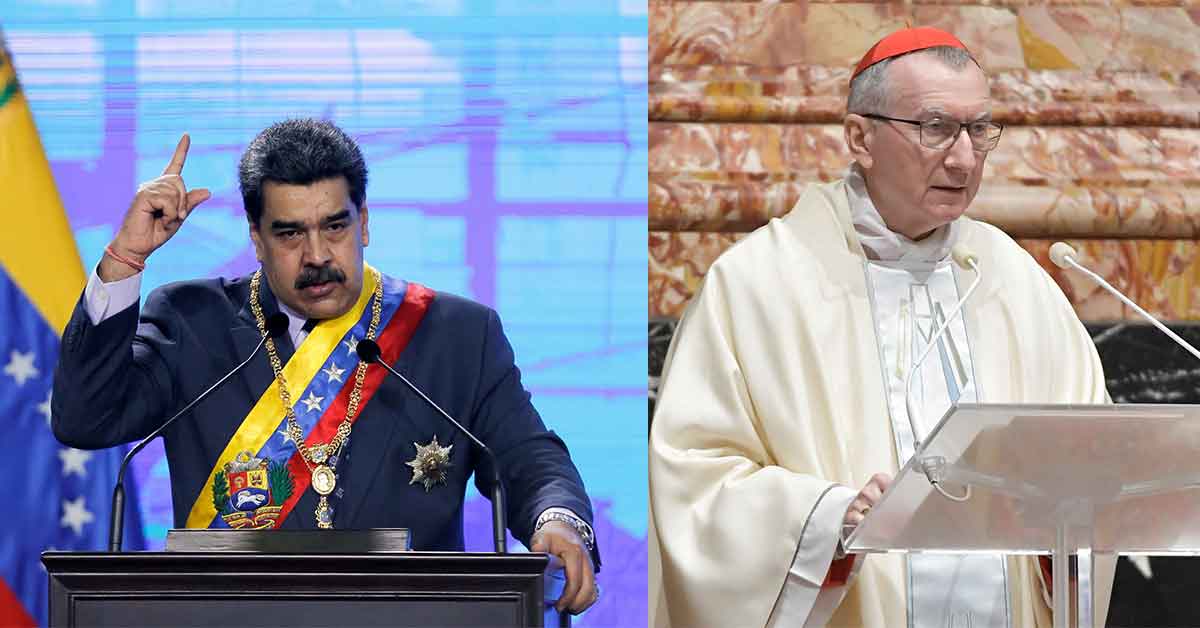 Nicolás Maduro, the president of Venezuela, called “garbage,” “poison,” full of “hatred” and “cynicism” a letter that the Vatican Secretary of State sent to a Venezuelan business leader encouraging dialogue to overcome the crisis in the country.

Under Maduro’s socialist administration Venezuela has been marred by violence and political and social upheaval, with severe shortages of food and medicine, high unemployment, power outages, and hyperinflation. Over four million Venezuelans have emigrated since 2015.

In a July 21 televised event, Maduro said that “when everyone is talking about production, uniting for Venezuela, overcoming the economic crisis,  here comes a totally unknown priest, I don’t know if he’s a monsignor or a bishop, and he read a letter supposedly from Pietro Parolin, Vatican Secretary of State, who was the Vatican’s ambassador here in Venezuela.”

Cardinal Parolin was apostolic nuncio to Venezuela from 2009 to 2013, during Hugo Chávez’ last years as president. In 2013 Pope Francis appointed Cardinal Parolin Vatican Secretary of State.

The cardinal’s June 23 letter was addressed to Ricardo Cusanno Maduro, president of Fedecámaras, the Venezuelan Federation of Chambers of Commerce. The letter was announced during the 77th annual assembly of the organisation, and addresses “issues about the future of the country’s economy and its relationship to peace.”

According to the weekly Colombian magazine Semana, the letter was read at the event by Bishop Ricardo Aldo Barreto Cairo, an auxiliary bishop of Caracas.

For Maduro, the Vatican text is “a letter that was a compendium of hatred, poison, quarrelling, cynicism, it’s ridiculous; a letter truly full of hatred, a national disaster, the letter from Pietro Parolin.”

“What does the Vatican foreign minister have to do with the assembly of a Venezuelan business organisation? I ask, what does he have to do with it? Explain that, Pietro Parolini (sic),” Maduro questioned.

Maduro also said that the letter “totally unsettled the atmosphere (of negotiations),” was a “disaster” and that “the letter that Pietro Parolin supposedly sent was rubbish. I don’t know that he sent it.”

In the letter sent to the Fedecámaras assembly, Cardinal Parolin said he is aware of the organisation’s commitment “to the economic and social development of the country, and the efforts they are making to promote a more just, democratic, productive and entrepreneurial Venezuela, in which true social justice reigns.”

“Like you, I consider it important that civil society also be the protagonist of the solution to the current crisis in that beloved country, a solution that will only be provided if Venezuelans, and especially those who have some kind of political responsibility, are willing to sit down and negotiate, in a serious way, on specific issues that respond to the true needs of Venezuelans, and for a set period of time,” the letter continues.

For Cardinal Parolin “this requires political will on the part of those involved, willingness to let the common good prevail over private interests, and the responsible support of civil society and the international community.”

“Therefore, I encourage you to support all initiatives that promote understanding and reconciliation among Venezuelans,” the cardinal wrote.

“If negotiations like the ones mentioned are successful, great generosity and patience will be necessary, since the current crisis will not be resolved immediately, but multiple efforts and sacrifices will still be necessary on everyone’s part,” he continued.

“I assure you of my prayers so that the meeting is fruitful and that, through the intercession of Blessed Dr Hernández, all of us, with generosity of spirit, know how to put the good of our neighbour, the common good, above our personal interests,” Cardinal Parolin said.

For several months, representatives of the Maduro regime and the opposition have been negotiating about setting up talks that could take place in August in Mexico, and could have the Norwegian government as an intermediary.

However, in recent days government officials came to the house of opposition leader Juan Guaidó with the intention of arresting him but were thwarted because his wife, Fabiana Rosales, got on Twitter to report it, causing neighbours to react and prevent his arrest.

While that was happening, former opposition assemblyman Freddy Guevara got a message out on Instagram from his car the moment he was surrounded by masked officials who took him into custody.

The government accuses Guevara of terrorism, treason, and criminal association, and his supposed ties to the death of 26 people in a Caracas neighbourhood, who according to the government were part of gangs that sought to overthrow Maduro.

The accusations against Guevara – which his legal defence team has called as false – are for the government consistent with the conditions that Maduro set for talks to take place.

Maduro’s conditions to go to Mexico are that the United States and the European Union lift all sanctions against Venezuela, that all political parties recognize the legitimacy of his government, and that “all sectors renounce violent plans with criminals, coups, the assassination of officials and other avenues of violence.”

On July 22, the Secretary General of the Organisation of American States, Luis Almagro, met with Guevara’s family and collaborators, who informed him of the opposition leader’s “arbitrary arrest and his delicate state of health.”

“We demand from the Venezuelan dictatorship full respect for his rights and his immediate release,” Almagro said on Twitter.