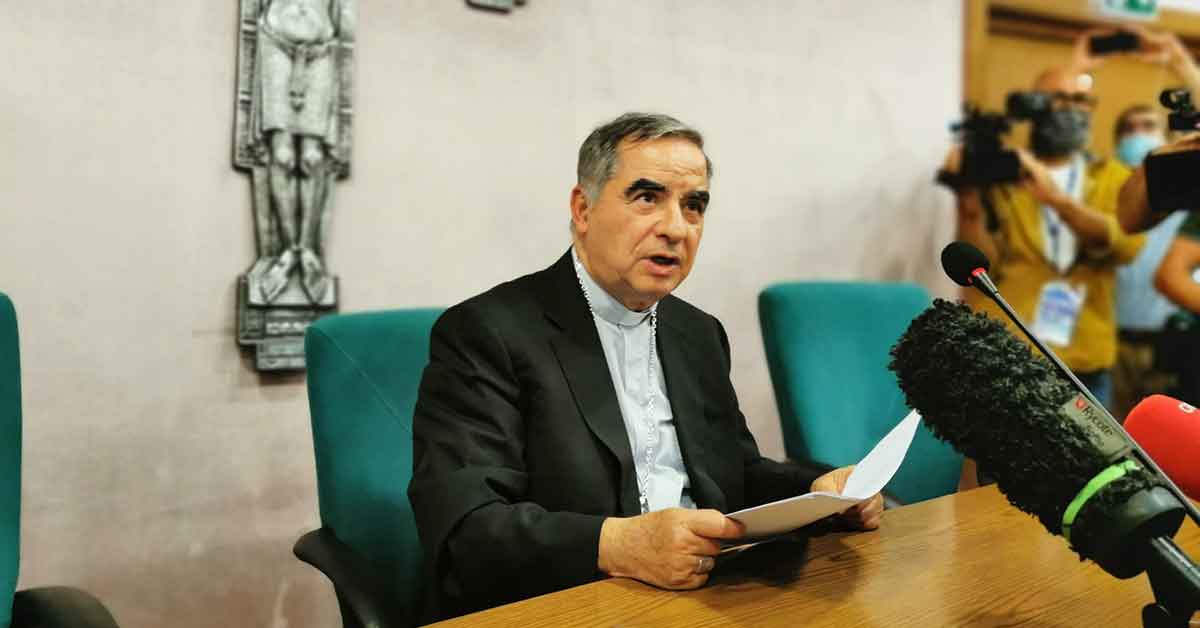 Cardinal Angelo Becciu, former prefect of the Congregation for Saints’ Causes, speaks with journalists during a news conference in Rome on Sept. 25, 2020. Vatican prosecutors have indicted 10 individuals and entities, including Cardinal Becciu, on charges ranging from embezzlement to money laundering and abuse of office. (CNS photo/Junno Arocho Esteves)

By Junno Arocho Esteves – The alleged mishandling of millions of dollars of church funds will bring several high-profile individuals to a makeshift Vatican courtroom set up in a multifunction room of the Vatican Museums.

The surprise announcement July 3 that Vatican prosecutors indicted 10 individuals and entities, including Cardinal Angelo Becciu, former prefect of the Congregation for Saints’ Causes, on a slew of charges related to financial mismanagement and malfeasance was the latest twist in the seemingly unending saga of the Vatican’s controversial investment in a property in London’s Chelsea district.

The indictments, especially of former Vatican officials, also may prove to be a litmus test for Pope Francis’ efforts to reform the Vatican’s finances, which have been marred by scandals over decades. This also is the first time in modern history that a cardinal is among those facing a Vatican criminal trial.

Most of the accused, including Cardinal Becciu, have declared their innocence and say they are peacefully awaiting their day in court.

“Finally, the moment of clarification is coming, and the court will be able to find the absolute falsity of the accusations against me and the dark plots that have evidently sustained and fed them,” Cardinal Becciu said in a statement released by his lawyers July 3.

René Brülhart, former president of the Vatican’s financial watchdog agency, said he “always carried out my functions and duties with correctness, loyalty and in the exclusive interest of the Holy See and its organs.”

“I face this matter with serenity in the conviction that the accusations against me will fully disappear,” he said shortly after the indictment was announced.

But the indictment document detailing the Vatican’s extensive two-year investigation into how the Vatican Secretariat of State used over $200 million to finance a property development project in London paints a serious and complex picture.

For years, Cardinal Becciu defended the London property deal and insisted there was nothing wrong with the purchase. He consistently denied that funds from the Peter’s Pence collection were used; the money, he said, came from a fund within the Secretariat of State.

“I want to deny this because we did not use that money,” the cardinal said during a book presentation in February 2020. “Peter’s Pence was not affected; an investment was made on a building. It was a good and opportune occasion, which many people envy us for today.”

However, according to the 488-page indictment seen by Catholic News Service, funds worth an estimated $200,5 million held in Credit Suisse bank accounts owned by the Secretariat of State were transferred to Athena Capital Global Opportunities, a Luxembourg-based investment fund owned by Raffaele Mincione, who also was indicted.

The investment, the indictment stated, “was made with funds from Peter’s Pence.”

Mincione, a London-based Italian financier who owned the London property, is accused by the Vatican of embezzlement, fraud, abuse of office, misappropriation of funds and money laundering.

According to the Vatican’s investigation, the money was originally intended “to subsidize an operation in the petrol sector in Angola sponsored by a local entrepreneur, Antonio Mosquito, who was introduced to the Vatican environment” by then-Archbishop Becciu. The two met when the Italian prelate served as apostolic nuncio to Angola from 2001-2009.

However, when that deal fell through, the money was used to invest in Mincione’s London property with Gianluigi Torzi, an Italian broker, serving as the middleman in the development deal. Torzi faces several charges, including the extortion of $17 million from the Vatican as payment for his role in brokering the deal.

The indictment also stated that Msgr. Alberto Perlasca, the former head of the Vatican Secretariat of State’s administrative office, provided prosecutors with a reconstruction of the events that led to the London property investment.

Msgr. Perlasca initially was seen as a possible suspect after Vatican police seized documents, computers and even floppy disks from his home and office in 2020. However, the report stated that he requested to speak to investigators.

In August 2020, the report said, Msgr. Perlasca gave his testimony and provided investigators “with a precious contribution for the reconstruction of some central moments relating to the case of the London property.”

Furthermore, Cardinal Pietro Parolin, Vatican secretary of state, and Archbishop Edgar Peña Parra, who serves as “sostituto,” the No. 3 position in the Secretariat of State, are not named as defendants in the lawsuit despite the fact that both, as well as Msgr. Perlasca, had approved several key steps in the failed deal.

According to a summary of the case by Vatican News published July 3, “neither Msgr. Perlasca, who signed the Share Purchase Agreement, nor his superiors, the substitute (Archbishop) Edgar Peña Parra, and above all Cardinal Pietro Parolin, had been effectively informed to be fully aware of the juridical effects that the different categories of actions would cause.”

Speaking with journalists in Strasbourg, France, July 4, Cardinal Parolin said that, in this case, the Secretariat of State “is the victim,” and he expressed his willingness to testify at the trial if asked.

“As an institution, we believe that we have been damaged by everything that has happened,” the cardinal told the journalists. “We have to defend our position and our morality,” but also “get back possession of the money.”

“If they say, ‘You are responsible for everything that happened,’ I will undoubtedly have things to say, answers to give,” he said, according to La Croix, the French Catholic daily newspaper.