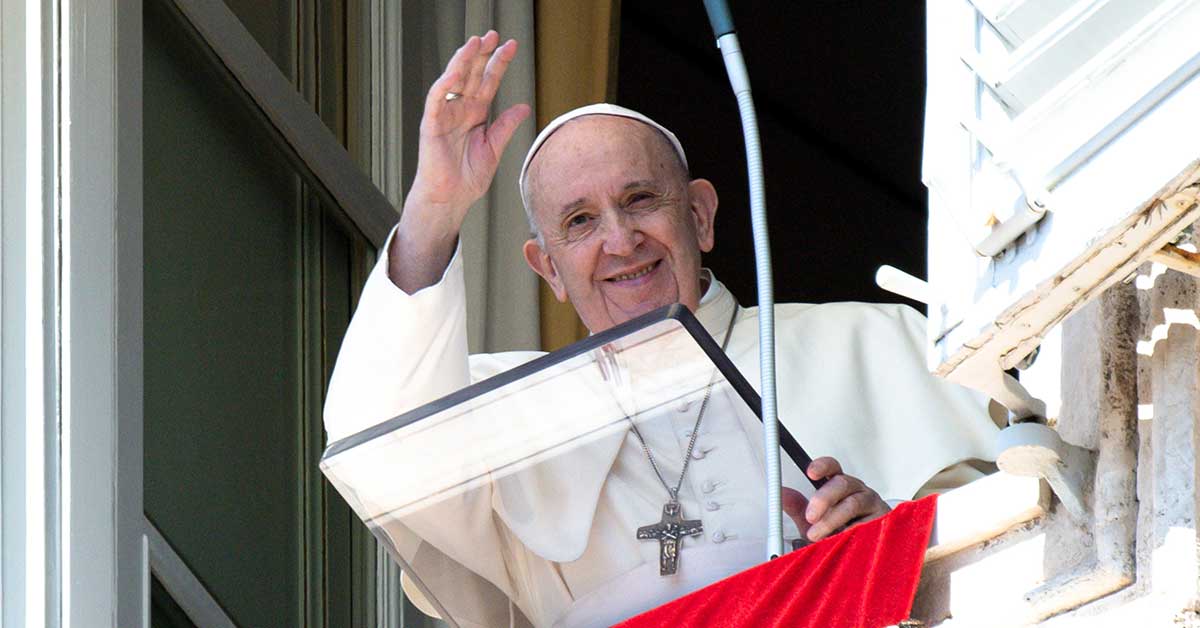 Pope Francis greets the crowd as he leads the Angelus from the window of his studio overlooking St Peter’s Square at the Vatican. (CNS photo/Vatican Media)

The Vatican confirmed Sunday that Pope Francis will travel to Hungary and Slovakia in September.

The pope will visit Budapest on September 12 for the concluding Mass of the 52nd International Eucharistic Congress. He will then travel to the Slovakian cities of Bratislava, Prešov, Košice and Šaštin from September 12 to 15.

The trip was confirmed July 4 by the director of the Holy See Press Office, Matteo Bruni, who said details about the pope’s program in Slovakia will be published at a later date.

Pope Francis himself announced his trip to Slovakia after his noon Angelus address: “I am pleased to announce that from 12 to 15 September next, God willing, I will go to Slovakia to make a pastoral visit,” he said from a window overlooking St Peter’s Square.

Pilgrims from Slovakia present in the square responded to the announcement with cheers, and the pope noted their presence. “The Slovaks are happy there!” he said.

“I sincerely thank all those who are preparing this journey and I pray for them,” Francis said. “Let’s all pray for this trip and for the people who are working to organize it.”

In his Angelus address July 4, Pope Francis reflected on “the comfort of habit and the dictatorship of prejudice,” which prevents us from really knowing Jesus and the people around us.

His exegesis centred on the day’s Gospel reading from St Mark. In the passage, Jesus preaches in the synagogue in Nazareth, but his fellow villagers react by asking themselves: “What kind of wisdom has been given him? What mighty deeds are wrought by his hands! Is he not the carpenter, the son of Mary, and the brother of James and Joses and Judas and Simon?”

“We could say that they know Jesus, but they do not recognise him,” the pope said. They “have known him for 30 years and think they know everything.”

“In reality, they never realised who Jesus really is,” he said.

Francis noted that the same thing can happen in our own lives with the people around us: we see someone in our neighbourhood, meet them occasionally, but “it is an ordinary, superficial knowledge that does not recognize the uniqueness of that person.”

“It is a risk that we all run: we think we know a lot about a person, and the worst is that we label them and shut them up in our prejudices,” he said.

“And here we get to the very heart of the problem,” Pope Francis continued, “when we make the comfort of habit and the dictatorship of prejudice prevail, it is difficult to open up to novelty and be surprised.”

He encouraged Catholics to foster amazement in their faith life.

“Without amazement, faith becomes a tired litany that slowly dies out and becomes a habit,” he said. “What is it, amazement? Amazement is precisely when the encounter with God happens.”

God became incarnate and he draws near to us in the normal activities of our lives, Francis said.

“And then, it happens to us as to the fellow villagers of Jesus, we risk that, when he passes by, we do not recognize him.”

“Now, in prayer, let us ask the Madonna, who welcomed the mystery of God in her daily life in Nazareth, for eyes and hearts free of prejudices and to have eyes open to be amazed: ‘Lord, that we might meet you.’”

“We meet him in the normal: eyes open to God’s surprises, at his humble and hidden presence in daily life,” he concluded.