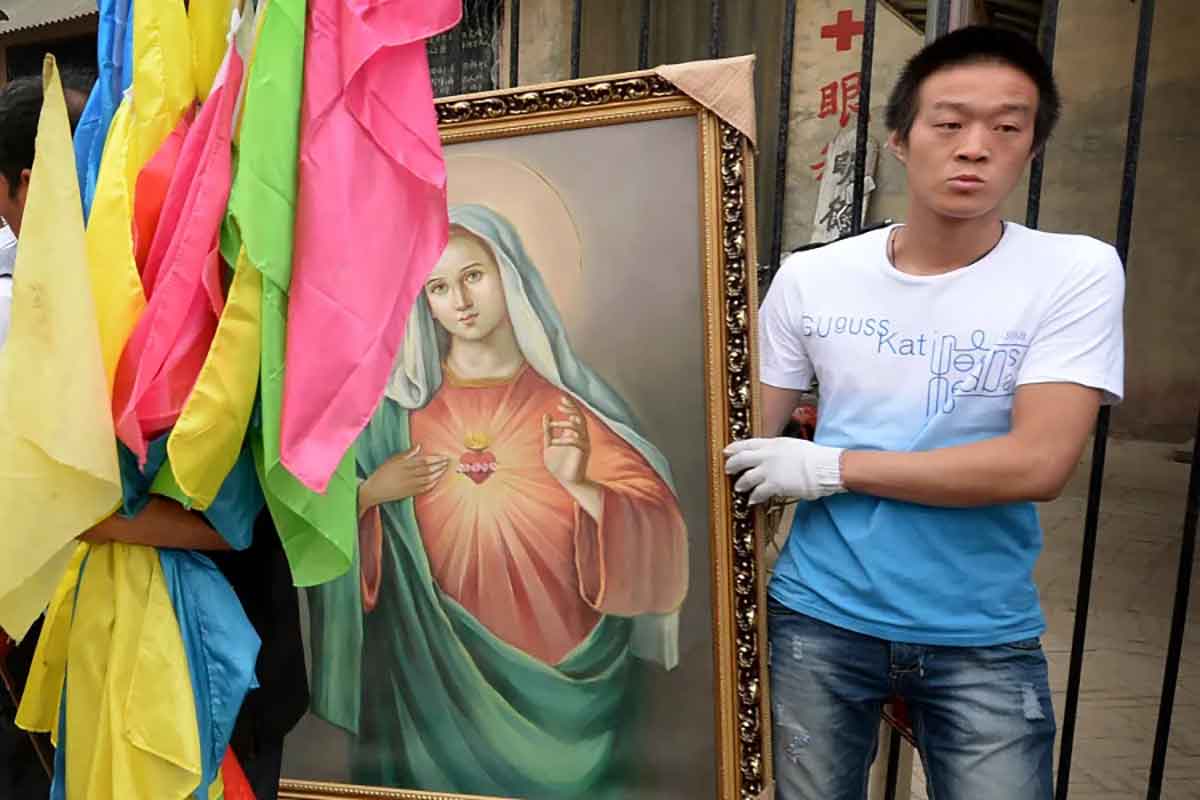 Catholic dioceses across China hosted celebrations of the 100th anniversary of the Chinese Communist Party (CCP) this year, while pilgrimages to China’s national Marian shrine were forbidden.

“Every community, every diocese has done congresses, performances, theatres, and even pilgrimages to the places of the Communist Party history,” Fr. Bernardo Cervellera, a missionary priest and journalist who closely covered the Church in China for the past two decades as editor-in-chief of AsiaNews, told CNA.

Bishop Joseph Li Shan of Beijing hosted a watch party at the bishop’s residence for President Xi Jinping’s July 1 speech marking the CCP centennial. Forty priests and Church members attended a symposium in Jiangxi province to study how to “implement the spirit” of Xi’s speech. And Catholics in Hubei held a flag-raising ceremony and celebration of the Party, according to the Chinese Patriotic Catholic Association website.

“But they are forbidden to go on pilgrimage to Our Lady of Sheshan, which is the national sanctuary for Our Lady in China,” the priest said.

For Cervellera, the situation exemplifies the challenges currently facing Catholic communities living under the eye of the CCP.

In the nearly three years since the Holy See entered into an agreement with Chinese authorities in September 2018, the situation on the ground has been very different for underground Catholics than for those under the leadership of the government-approved Patriotic Association.

For the underground Catholic community, life has been “very harsh,” Cervellera explained.

“We have seen some convents of sisters destroyed, churches closed. We have seen priests chased from their parishes and also some seminarians forbidden to study theology … and also bishops who are arrested or in whole house arrest, 24 hours a day,” he said.

Government-approved Catholic churches, on the other hand, have comparatively more freedom of worship, but face other challenges, including pressure from the government to censor parts of Catholic teaching, while including Chinese nationalism and love for the party into the preaching.

Catholic priests who minister in China legally are required to sign a paper in which they promise to support the Communist Party in China. They are only allowed to minister in recognized places of worship in which minors under the age of 18 are not allowed to enter.

“And above all, they have to praise the glory of the Communist Party,” Cervellera said.

According to the Vatican, five bishops have been appointed under the framework established by its agreement with Chinese authorities since 2018. The Church is in need of at least 40 bishops in China that still need to be appointed, according to Cervellera.

“From what I’ve seen, bishops who have been ordained, nominated, and ordained, they are all president or secretary of the Patriotic Association. So this means that they are very near to the government,” Cervellera said.

Ahead of the Chinese Communist Party’s 100th anniversary, the government launched an app and hotline in April through which citizens were asked to report anyone who questions the CCP’s account of its own history, something the government referred to as “historical nihilism.”

In practice, this means that CCP policies like Mao Zedong’s  “Great Leap Forward” – a five-year collectivised farming plan that resulted in a famine that killed more than 20 million people between 1959 and 1962 – were omitted from the party’s historical narrative.

This type of censorship makes it nearly impossible for Chinese Catholics to have a conversation about decades of their own history after the Chinese Communist Revolution in 1949.

In the years following the establishment of the People’s Republic of China, many Catholics were arrested for refusing to comply with government campaigns to eliminate foreign influence and nationalise private schools.

Pope Pius XII highlighted this suffering in his encyclical Evangelii praecones in 1951.

“We have learned that many of the faithful and also nuns, missionaries, native priests and even bishops have been driven from their homes, despoiled of their possessions and languish in want as exiles or have been arrested, thrown into prison or into concentration camps, or sometimes cruelly done to death, because they were devoutly attached to their faith. Our heart is overwhelmed with grief when We think of the hardships, suffering, and death of these our beloved children,” the pope wrote.

The late Bishop Joseph Zhu Baoyu was born in 1921, the same year as the Chinese Communist Party was established in Shanghai. He was sentenced to 10 years of forced labor as an “anti-revolutionary” in 1981 after he was arrested for taking Catholics on pilgrimage to the Marian Shrine of Our Lady of Sheshan in Shanghai.

The president of Chinese Patriotic Catholic Association, Bishop John Fang Xingyao of Shandong, said in July that President Xi’s speech to mark the 100th anniversary of the CCP was eloquent and provided a deeper understanding of why the Chinese Communist Party is capable. He met with Bishop Shen Bin of Haimen and Bishop Ma Yinglin on Kunming to discuss Xi’s speech.

Former Chinese Communist Party policies, including the decades-long one-child policy, continue to have a lasting impact on the demographics of the Church in China.

“Now the families have one child, and it is difficult for them to give to God this child because they also need to know what to do [and who will care for them] when they are old,” Cervellera said.

?“And so, some priests have told me vocations are reduced now, not as big of numbers as before.”

And for those who have answered the call to the priesthood, the government may not allow them to be ordained.

Four priests were ordained in Shanghai in July at an ordination in which five were supposed to be ordained. Government orders prevented one of the ordinations from going forward because the seminarian had attended World Youth Day in Kraków, Poland, in 2016, according to an AsiaNews report by Cervellera.

This is not the first time that there have been tensions about Chinese Catholics participating in World Youth Day.

Fr. Cervellera recalls the “World Youth Day Manila in 1995, in which John Paul II said that Asia is our common mission for the third millennium.”

“Youth from China were invited, and they started celebrating the Masses and all the meetings with other youth in Manila, but … some members of the Patriotic Association were with these youths. They did everything to detach these young people. I was there and they practically tried to avoid the relationship with other Catholics of the world,” he said.

Seminary formation is another arena in which Chinese authorities have attempted to lessen “foreign influence.”

“Formation also has become difficult, not because there are no seminaries, but because these seminaries are always controlled,” Cervellera said.

He pointed out that one seminary in China that had 23 foreign professors during Benedict XVI’s pontificate now only has three professors from outside of China.

“The Communist Party, the Patriotic Association, tries to have an independent Church and mentality,” he said, adding that this cuts off future priests from the “richness of the Catholic Church [in the] universality of its teaching.”

Our Lady of Sheshan

For those who would like to support Catholics in China, Fr. Cervellera underlined the importance of prayer.

“We talk a lot about the New Silk Road. But the real Silk Road is the prayer road, the road of prayer, the road of pilgrimage because this can change China [for the] better,” Cervellera said.

The missionary priest said that he finds it strange that not many dioceses have held local celebrations for the World Day of Prayer for the Church in China established by Benedict XVI to take place each year on May 24.

This date is the feast of Mary, Help of Christians, on which thousands of Chinese Catholics used to make a pilgrimage to the Basilica of Our Lady of Sheshan, which was banned again this year weeks before the organised diocesan gatherings to celebrate a century of the Chinese Communist Party took place.

The local government cited the COVID-19 pandemic as the reason for barring the pilgrimage, but Chinese Catholics pointed out that the nearby amusement park and other tourist spots near Sheshan hill were open at the time.

Bishop Thaddeus Ma Daqin of Shanghai has been living under house arrest since 2012 after he publicly resigned from the Chinese Patriotic Catholic Association after his ordination.

Even before the Sheshan basilica was closed in 2020 because of the pandemic, Chinese authorities took steps in 2019 to prevent underground Catholic groups from organising pilgrimages to Sheshan and required pilgrims to the Marian shrine to sing the national anthem.

Cervellera said that the Communist Party fears the interior freedom that religion can bring.

“University students, they are very interested in Catholicism and in Christianity, also Protestant Christianity. I think this is why the Chinese government now tries to stop the religious education for youth, because they fear an increase of conversions,” he said.

Fr. Cervellera ended his tenure as editor-in-chief of AsiaNews in June and announced that he would be continuing his missionary work with the Pontifical Institute for Foreign Missions in Asia.