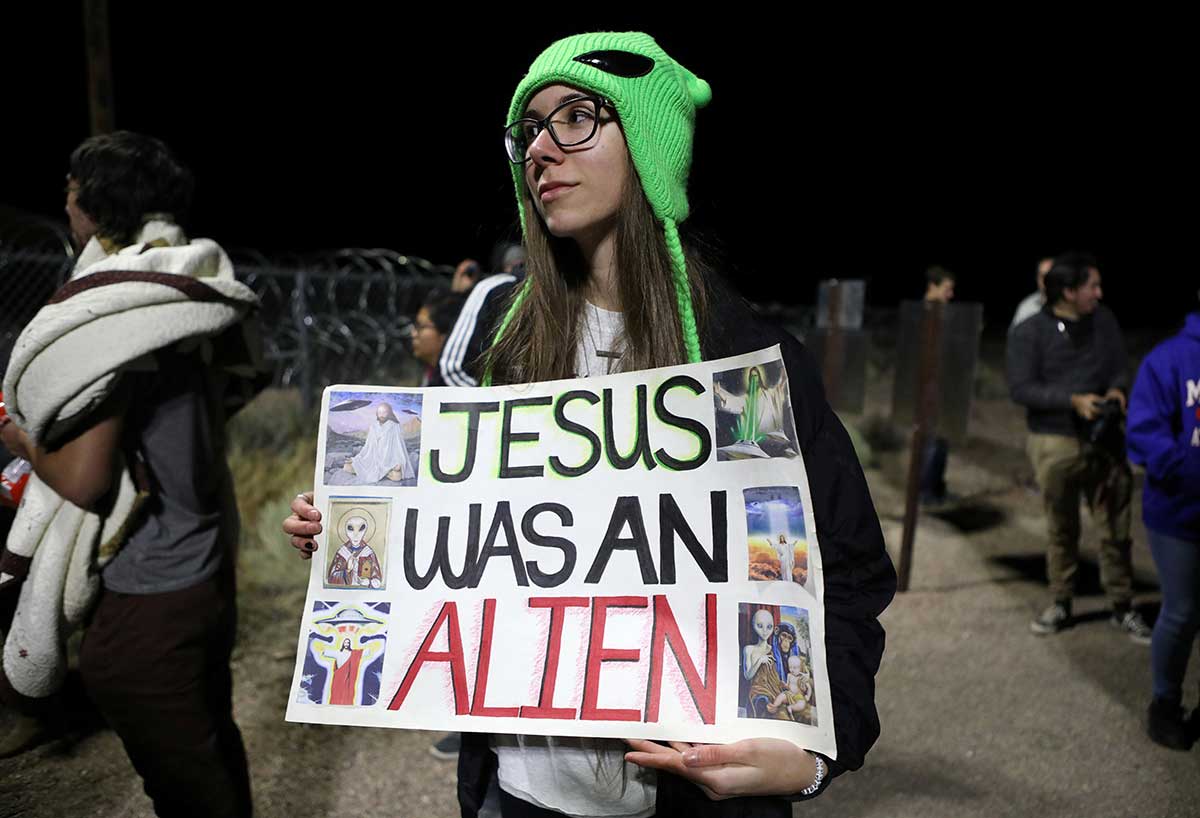 A woman carries a sign Sept. 20, 2019, that reads “Jesus was an Alien” outside a gate to Area 51, which is officially named Homey Airport in Rachel, Nev., as a detachment administered by Edwards Air Force Base. The secretive U.S. military base is believed by UFO enthusiasts to hold government secrets about extraterrestrials. (CNS photoJim Urquhart, Reuters)

By Dennis Sadowski – Are humans alone or are we one rational species among many in the universe?

It’s a question both scientists and theologians are exploring.

And it is scientific discoveries that are energising the queries not just about the possibility of rational, or intelligent, life, but also about God’s role in life elsewhere and if there may be an incarnational experience beyond Earth.

Since 1992, over 4,000 exoplanets have been discovered orbiting stars light-years beyond the solar system and are considered “confirmed by scientists, according to NASA.

The most interest is in those exoplanets found to be similar to Earth and located in the “Goldilocks Zone” around stars — where it is likely to be neither too hot nor too cold for liquid water to exist and other conditions appear to be just right for life as we know it to have developed.

“What we have found is what we think are biological essential ingredients for making a living planet — from a chemistry point of view water and organic molecules — are very common,” Karin I. Öberg, who is Catholic and professor of astronomy at Harvard University, told Catholic News Service.

Her research focuses on how chemistry affects star and planet formation and the likelihood of forming habitable planets. She explored the work in a presentation at the Society of Catholic Scientists’ annual conference in June in Washington.

Another Catholic scientist, Jonathan Lunine, director of Cornell University’s Centre for Astrophysics and Planetary Sciences, also studies planetary formation and evolution. He is playing a key role on NASA space missions, including the Juno spacecraft that has been orbiting Jupiter since 2016.

During the society’s meeting, Lunine reviewed the space missions to Mars as well as those planned for the outer solar system.

It turns out, Lunine told CNS, that, beyond Mars, some of the most interesting places in the solar system to explore for the existence of life are satellites such as Europa in orbit around Jupiter and Titan and Enceladus orbiting Saturn.

Missions are either being planned or being considered to those far-off satellites with the intention of hunting for signs of life.

Outside of such the scientific quests lies the significant question about God’s plan for creation. Theologian Christopher Baglow, director of the Science and Religion Initiative at the McGrath Institute for Church Life at the University of Notre Dame, addressed this in the opening presentation of the conference’s first-day focus on extraterrestrial life.

He told the audience, and repeated later to CNS, that it is only possible to offer “faithful speculation” about what God has in mind for life elsewhere.

“Basically we have a situation where the church has not taught anything definitively about that, so we have no doctrine to rely on,” he said. “So how do we proceed in thinking about this?”

Baglow said the question comes down to trying to understand what God’s relationship with creation and redemption might be with any rational species that may exist beyond Earth.

While some theologians and even some scientists question the value of searching for life beyond Earth, Baglow said that in light of his Catholic faith, it’s a worthwhile endeavour to explore the relationship God might have with all of life. It’s “faith seeking understanding,” he said.

Baglow suggested that other rational beings would have a history and that God’s presence would be made known to them in some way. God’s goal, he said, “would be to unite them to himself” as God has done with humanity.

“Thinking about what God has done for humanity is for me at the heart of what it means to be a theologian,” Baglow told CNS. “So to apply that to a new question like this would be spiritually rewarding.”

Neither of the scientists ruled out the possibility of rational life elsewhere and said such a discovery would serve to further promote understanding and appreciation of God’s creation.

Öberg said she hoped that there are other intelligent beings somewhere in the universe. If so, their existence would pose new theological puzzles about salvation and incarnation, but that such a finding certainly would be a strong indication that they are “very specifically created by God.”

Other questions revolve around stages of the evolution and whether rational beings elsewhere are as advanced as humans or more primitive than humans.

But that doesn’t mean the quest for life elsewhere should be abandoned, he said, and that’s why he’s involved in the search with scientists worldwide.

At Jupiter’s Europa, he explained to the attendees at Catholic scientists’ conference, Earth-based telescopes and earlier space missions have gathered evidence that points to the satellite having a subsurface water ocean beneath a thick ice crust. Lunine is working on an instrument that will be carried aboard the Europa Clipper mission, which is planned for launch in October 2024. The mission will conduct a long-term reconnaissance of Europa to determine whether the icy moon could have conditions suitable for life.

It’s Enceladus that interests Lunine the most, however. He described the Saturnian world as the most habitable place in the solar system away from Earth. The Cassini-Huygens space probe to Saturn that ended its mission in 2017 discovered geyserlike jets spewing water vapour and ice particles from a salt-water ocean beneath the world’s icy crust.

Lunine described one mission proposed to explore the satellite. Called Enceladus Life Finder, it would assess the possibility of life through a series of measurements including testing of the water plumes.

Titan is notable because of its methane lakes and seas, which could harbour life different than what exists on Earth. It is the only satellite in the solar system with an atmosphere.

For Öberg, the work involves looking at the material that goes into forming planets rather than strictly studying any discovered planets. Öberg and other researchers look for signs that water and certain organic molecules, particularly hydrogen cyanide, exist by examining the spectra of the light from planet-forming discs around stars.

Hydrogen cyanide is a key molecule for the production of life’s building blocks. It is a precursor for amino acids on Earth.

Öberg discussed the process in her presentation. She said water is abundant throughout the galaxy while organic molecules are less so but still widespread.

The challenge, Öberg explained, is determining how these basic chemical building blocks become something to carry information that leads to life.

Research into how life began on Earth is helping scientists determine if what they have learned is applicable to other planets as well, she told CNS. Scientists have been able to develop predictive models about what may be happening elsewhere under conditions similar to those on Earth billions of years ago.

If life is discovered away from Earth, Lunine does not believe it would diminish humanity’s place in God’s divine plan. He finds inspiration from St. Thomas Aquinas, who wrote in “Compendium Theologiae” (“Compendium of Theology”) in 1273 that the multiplicity of life on Earth was “devised by the divine intellect and established in things so that the divine goodness might be represented by created things in various ways.”

Lunine told CNS that such order and beauty in creation, wherever it might exist, would further illustrate God’s greatness.

“One would expect a superabundance of things. So why not (explore)? Why not in terms of finding life?”