Cardinal Pell: Catholics should debate issues, not debase each other 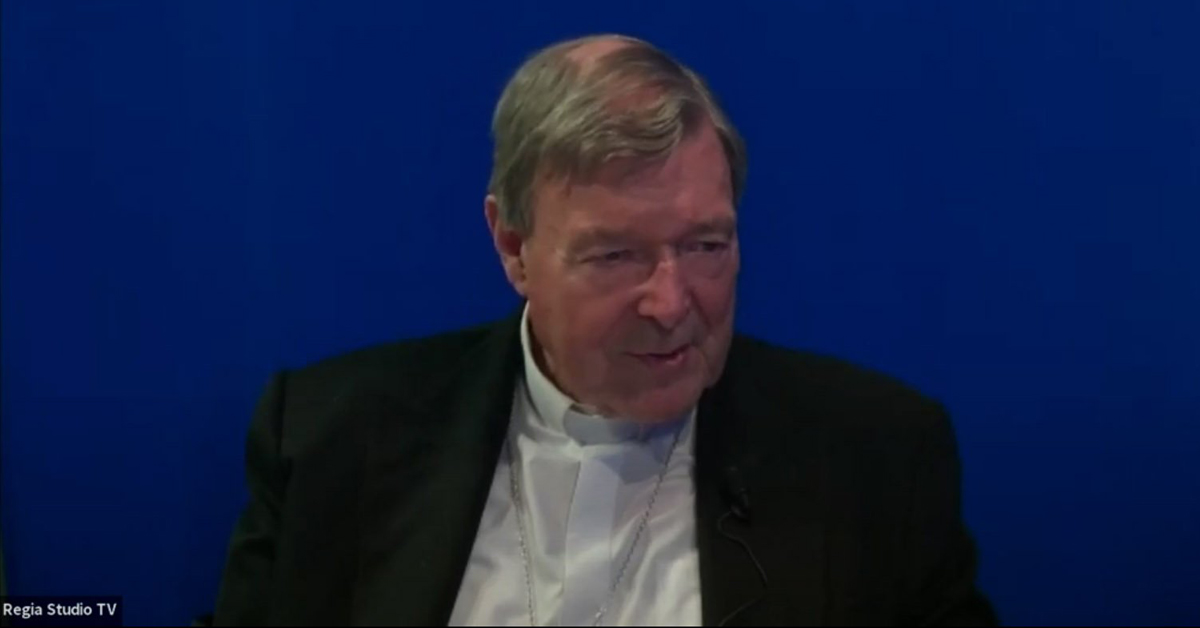 Australian Cardinal George Pell speaks during a live interview broadcast on YouTube from the Pontifical University of the Holy Cross in Rome Sept. 23, 2021. The interview covered a variety of topics, including financial reform at the Vatican and the cardinal’s experience in prison. (CNS photo/Pontifical University of the Holy Cross YouTube channel)

By Carol Glatz – Honest and open debate about different points of view in the Catholic Church are fundamental, but Catholics should not be demonising the individuals with those views, Cardinal George Pell said.

Asked about the different polarised positions among Catholics that can be found online, he said that many of the issues being discussed are “very important, and I don’t think there can be any compromise on the fundamental issues of what is the apostolic tradition.”

The church’s stance on issues should be clearly explained, but there is “a hierarchy of truths, not everything is equally important,” which means Catholics “should not be disagreeing violently over too much at all but certainly not over matters which are of less importance,” he said in an interview in Rome streamed live Sept. 23 and uploaded the next day by the Pontifical University of the Holy Cross.

As Catholics try to choose among many sources and offerings online, what they should be looking for and contributing to “is regular courtesy, a regular commitment to the truth, to dialogue, debating, arguing about the issues” themselves and not attacking the people who hold a different point of view, said the cardinal, who is the former prefect of the Vatican Secretariat for the Economy and retired archbishop of Sydney.

The interview was part of the university’s biennial “The Church Up Close” seminar offered to journalists who report on the Catholic Church. This year’s seminar was held online and focused on “Covering Catholicism in the Age of Francis.”

The interview with Cardinal Pell covered a wide variety of topics, including Cardinal Pell’s experience in an Australian prison for 13 months on child sex abuse charges until he was cleared by a unanimous decision of the High Court in 2020 and the vital importance of due process for both victims and the accused.

“Denouncing somebody in the press so they’ve got almost no chance of defending themselves is, I think, a violation of due process,” he said.

“Everybody has a right to the truth, and in the long term it is the best protection for the victims too,” because any manifestly false accusation “poisons public opinion against the genuine victims,” he said.

“We need to follow the commandments, we need to practice what Christ taught, if we did that there would have been no sexual abuse. The authorities would have faced up to the problem in truth,” he said.

“What the church was doing in terms of muddle and cover-up 20 years ago was generally done in all of society – now that is not excusing it, but it is setting it in context,” he said.

Cardinal Pell also noted that many countries have seen a “dramatic fall” in the number of reported incidents since the 1990s.

“Very often we’re not given credit for that” and, in terms of prevention, “we broke the back of the problem,” he said.

The late St John Paul II “was a powerful antidote” to scandals in the church because of his teachings about moral truths, the cardinal said. “He made it quite clear that he believed there was such a thing as right and wrong.”

Cardinal Pell praised retired Pope Benedict XVI as “a prodigious intellect, a dear friend” and said he never imagined the pope would resign, adding, “I never really approved of it either.”

Pope Francis has “a great gift of empathy and sympathy” and a great capacity to show closeness to people who are suffering and those who care for them, he said.

Pope Francis, he said, has “a great gift, like Jesus did, of reaching out to those on the peripheries and ‘sinners,’ and categories that are not always seen in the front row at church and that can and has confused people.”

However, the papacy is something that is willed by Christ, “we have to respect the office,” have reverence for the man who holds that office, and “obey the papal directions,” he added.

When asked about the polarisation in some Catholic media, he said, “we shouldn’t get into personal abuse, demonizing people who have a different point of view.”

He listed a number of well-known Catholic authors who have different analyses and approaches for living the faith today, encouraging they be read even if one disagrees.

For example, he said he did not agree with the so-called “Benedict Option,” which, according to the book by Rod Dreher, calls for building a small Christian community that can act as a protective “ark” against the flood of a morally weakened society.

“I’m not sympathetic to just a small little elite church. I would like to keep as many of the semi-religious slobs like myself in the stream,” he said. To want a church made up of just heroes and martyrs is “not the Catholic tradition.”