Pope: Christianity without the cross is sterile 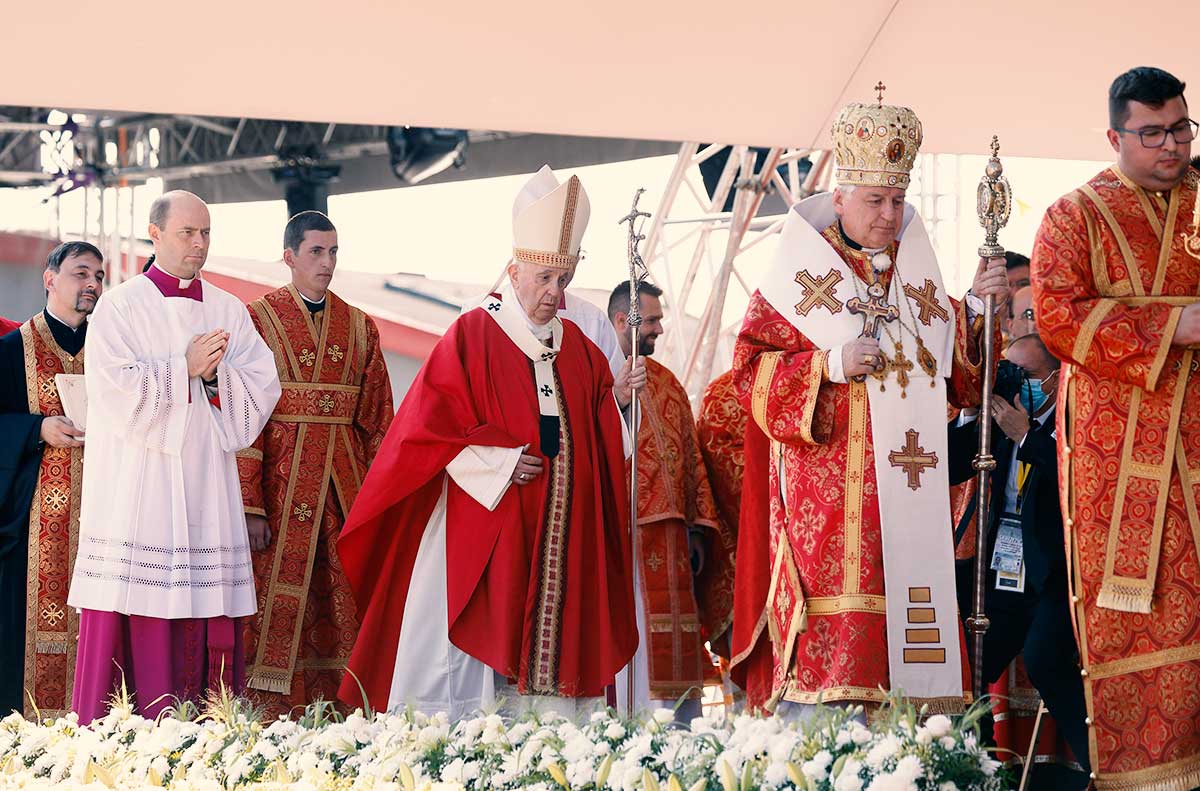 By Junno Arocho Esteves –  Falling into the temptation of rejecting the cross and choosing a triumphalist form of Christianity leads to a faith that is superficial and sterile, Pope Francis said.

Presiding over a Divine Liturgy Sept. 14, the feast of the Exaltation of the Holy Cross, Pope Francis said that although God saved humanity by “allowing the evil of our world to be unleashed upon himself,” the world views the cross as a “failure.”

Christians too, he warned, can also fall into the trap of preferring “a God who is powerful and triumphant” rather than “weak and crucified.”

“This is a great temptation. How often do we long for a Christianity of winners, a triumphalist Christianity that is important and influential, that receives glory and honour? Yet a Christianity without a cross is a worldly Christianity and shows itself to be sterile,” the pope said.

The liturgy took place in a square outside the Mestská športová hala stadium. A plaque outside the stadium commemorates St. John Paul II’s meeting in Prešov with Slovakia’s Byzantine Catholics in 1995.

According to statistics published in the CIA’s World Factbook, in Slovakia, Latin-rite Catholics make up 62% of the population, while 3.8% are Eastern Catholic.

More than 30,000 people, the majority wearing masks, were present at the Divine Liturgy. Although the government initially mandated all participants of papal events to be vaccinated, authorities relaxed their initial regulations and allowed participants who presented a negative COVID-19 test or proof of recovery from coronavirus.

Arriving in his popemobile, the pope greeted the thousands of faithful present, many of whom had waited several hours outside for his arrival. While early morning rain threatened to complicate the liturgy, moods lightened as much-needed sunlight broke through the clouds.

As he rode around the square, the pope waved and blessed the crowd as they sang and waved the yellow and white papal flags.

In his homily, the pope reflected on the day’s Gospel reading from St. John recounting Jesus’ crucifixion. The evangelist, he noted, both “sees and testifies” to the mystery of the cross.

St. John, he said, saw “an innocent and good man, brutally put to death between two criminals,” a reflection of the of countless injustices suffered throughout human history in which “the good are cast aside and the wicked prevail and prosper.”

Nevertheless, he also saw the “glory of God” who “willingly offers himself for every man and woman.”

“There, to the very place we think God cannot be present, there he came. To save those who despair, he himself chose to taste despair; taking upon himself our most bitter anguish, he cried out from the cross: ‘My God, my God, why have you forsaken me?'” the pope said.

While Christians often wear crucifixes, hang them on walls or carry them in their pockets, Pope Francis said that without taking the time to contemplate on Christ crucified, the cross will remain “an unread book whose title and author we know, without its having any impact on our lives.”

“Let us not reduce the cross to an object of devotion, much less to a political symbol, to a sign of religious and social status,” the pope said.

Contemplating the cross, he continued, leads to bearing witness to Jesus and transforming one’s life in becoming a mirror image of him, like Slovakia’s martyrs who gave their lives for the faith.

“How many generous persons suffered and died here in Slovakia for the name of Christ!” the pope exclaimed. “Theirs was a witness borne out of love of him whom they had long contemplated. To the point that they resembled him even in their death.”

While there is no persecution of Christians in the country “as in too many other parts of the world,” he added, bearing witness to Christ can be “weakened by worldliness and mediocrity.”

“A witness of the cross does not dwell on the wrongs of the past or keep lamenting the present. Witnesses of the cross do not employ the ways of deception and worldly pretension: they do not want to impose themselves and their own, but to give their lives for others,” the pope said.

Concluding his homily, Pope Francis encouraged Christians in Slovakia to remember those who gave witness to God’s love, especially those who “nurtured you and helped you to grow in the faith” and gave their “lives in love to the end.”

“These are our heroes, the heroes of everyday existence, and their lives changed history,” the pope said. “Witnesses generate other witnesses because they are givers of life. That is how the faith is spread: not with the worldly power but with the wisdom of the cross; not with structures but with witness.”

Pope Francis was in Slovakia Sept. 12-15 for a brief pastoral visit. He travelled to Prešov from the capital, Bratislava, where he stayed each night.

After the Divine Liturgy, the pope made an unscheduled stop at the Jesuit house in Prešov.