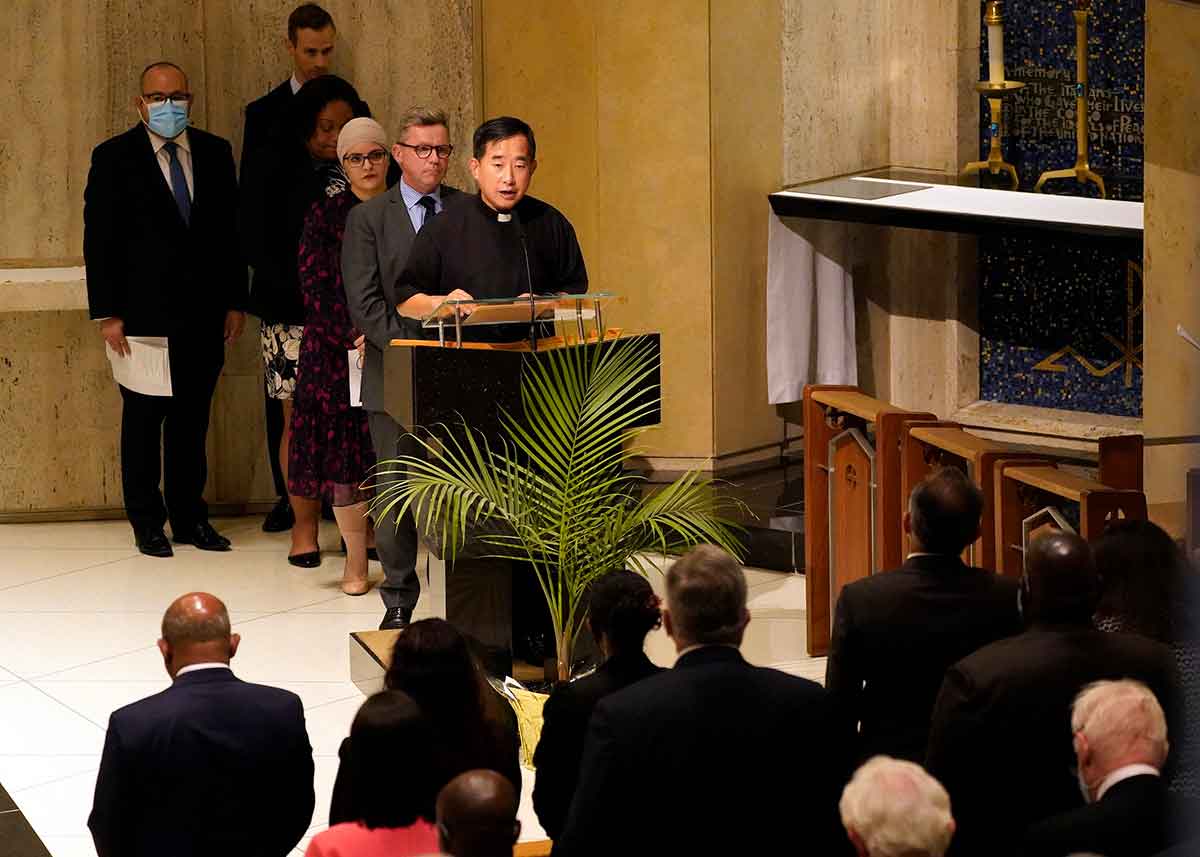 Jesuit Father Joseph Lin reads one of the general intercessions in Chinese during a prayer service for United Nations diplomats on Sept. 13, 2021, at Holy Family Church in New York City. The service, hosted by the Vatican’s permanent observer mission to the U.N., was held on the eve of the opening of the 76th session of the U.N. General Assembly. (CNS photo/Gregory A. Shemitz)

By Beth Griffin – In the face of widespread evidence of humanity’s dark side, speakers a prayer service on September 13 – on the eve of the opening of the 76th session of the United Nations General Assembly – identified unmistakable signs of hope.

Bishop Gregory J. Mansour of the Maronite Diocese of St. Maron of Brooklyn said there is a “great and edifying effort” by the United Nations to counter “totalitarian forms of government that trample the rights of the people they are called to serve.”

He also highlighted the “global work to alleviate human trafficking, assist refugees and people on the move, work on nuclear disarmament, combat climate change and so much more.”

The bishop referred to remarks made at the International Religious Freedom Summit in Washington this summer, which stressed that the right to religious freedom “is not conceded to us by any nation or by governments but is innate by virtue of being human.”

“Our relationship to God defines who we are as persons and must be understood and respected as even more important than our allegiance to any worldly power or government,” he told the congregation gathered at the Church of the Holy Family near U.N. headquarters.

The leader of a Maronite Catholic Diocese in New York said that greater protection of religious freedom is a buttress against attacks on the dignity of the human person by overreaching governments, groups and individuals.

He also urged the assembled ambassadors and diplomats to support Lebanon as an ongoing “inspiring sign of interreligious and political harmony.”

Although he said the ongoing pandemic is a deep concern he said it also serves as an invitation from a loving God to greater solidarity among people and has demonstrated the generosity of international humanitarian aid agencies and some developed nations.

Similarly inspiring, he said, is the growing resolve to use international cooperation to remedy human-caused harm to the Earth.

Bishop Mansour said Pope Francis’ recent visit to Iraq, where he met with Shiite and Sunni leaders, holds great promise for the future.

There is increasing respect for the dignity of the human person and his or her inalienable rights in the world today, the bishop said. More people work to honour the truth that human life in “all its stages is a sacred gift.”

“If we do not treat each person as an unrepeatable gift, we risk becoming transactional beings, simply a means to an end for governments or anyone else to use or exploit,” he said.

In a videotaped address, U.N. Secretary-General Antonio Guterres said the last year has brought more death and sadness to the world than the previous year, but also more solidarity and caring. “In these difficult times, people turn to faith. I turn to faith communities because they can transform the world,” he said.

He also said leaders draw strength from the annual prayer service before they meet to address the world’s worst problems.

He thanked participants for their prayers, noting: “We need these prayers for the wisdom to find solutions, the energy to act on them and the unity that this gathering represents.”

Abdulla Shahid, foreign affairs minister of the Maldives and the General Assembly’s  incoming president, said hope is sorely lacking and desperately needed in the world today. Those who participate in the U.N. have a responsibility to inspire hope through their words and actions and by working hand-in-hand across borders.

Shahid said the new session of the assembly is challenged to “make our world greener, bluer and more resilient” and to support human rights, among other tasks. “The General Assembly cannot afford morally or otherwise to kick the can down the road. We must stand up for the most vulnerable.”

The annual interreligious service has been sponsored since 1987 by the Vatican’s Permanent Observer Mission to the U.N., the Archdiocese of New York and the Church of the Holy Family, the self-described “United Nations Parish.”

Prayers were drawn from texts of Pope Francis as well as a Prayer for Racial Healing distributed by the U.S. Conference of Catholic Bishops. Prayers of petition were offered in Chinese, Arabic, Russian, Spanish, English and French. Musicians from the Schola Cantorum of St Vincent Ferrer Parish in New York performed a cappella preludes, hymns and choral responses.

In his welcoming remarks, Father Gerald E. Murray, Holy Family pastor, recalled that St. Paul VI met with religious leaders at the church after his historic 1965 address to the General Assembly.

“Our annual gathering is an ongoing response to St. Paul VI’s desire that those who work for peace be united in prayer to God for his gift of peace,” he said.