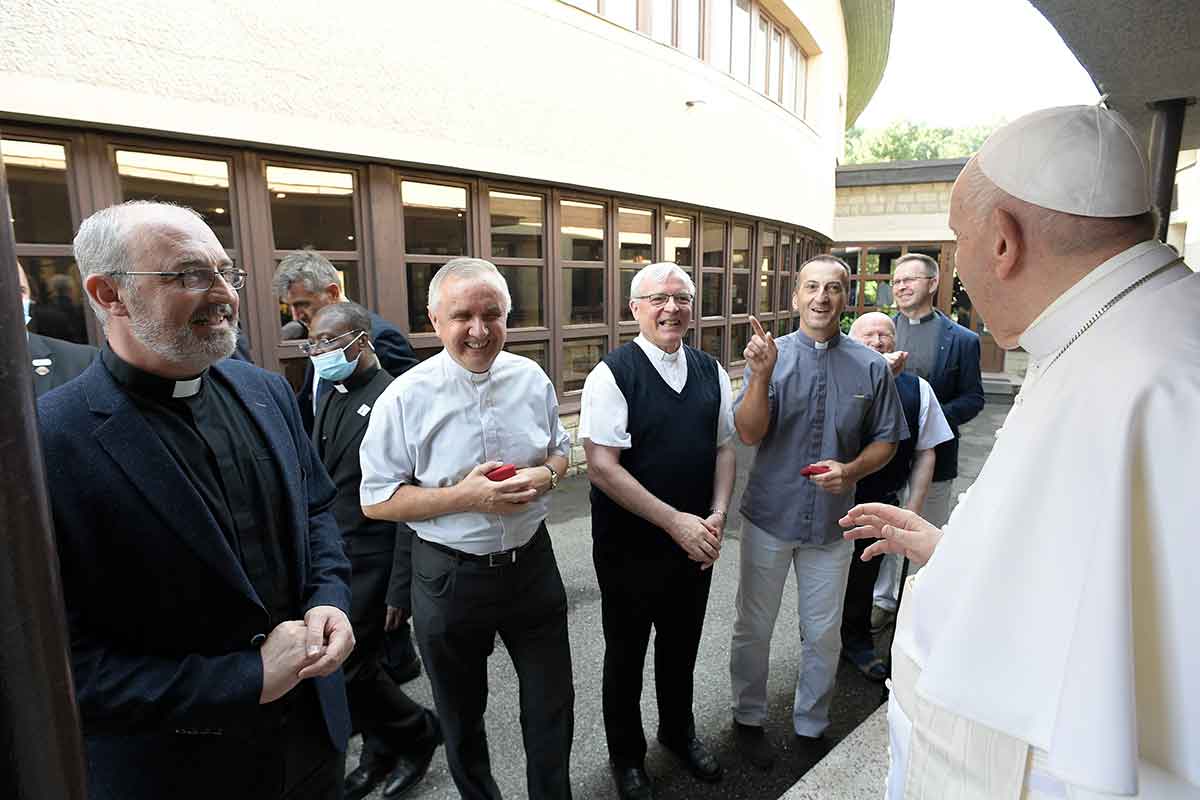 Pope Francis talks with members of the Society of Jesus at the apostolic nunciature in Bratislava, Slovakia, Sept. 12, 2021. During a private meeting, the pope spoke to the Jesuits about his health, the pastoral work of Jesuits in Slovakia, and how he deals with suspicions or criticisms. (CNS photo/Vatican Media)

By Junno Arocho Esteves – The Catholic Church suffers from a temptation to attempt to return to attitudes and practices of the past, an attitude that blocks pastoral outreach to many of those who are marginalised, Pope Francis told Jesuits in Slovakia.

“We are suffering this today in the church: the ideology of going backward. It is an ideology that colonises minds. It is a form of ideological colonisation,” the pope told his Jesuit confreres Sept. 12 during a meeting at the apostolic nunciature in Bratislava.

He also said the purpose of the 2015 Synod of Bishops on the family was “to make it understood that couples in second unions are not already condemned to hell.”

Today, he said, many in the church are afraid of accompanying people “with sexual diversity.”

“This is the evil of this moment: namely, to seek the path in rigidity and clericalism, which are two perversions,” he said.

As is customary when the pope meets Jesuits during a foreign trip, a transcript of his remarks was released weeks later by the Jesuit journal La Civilta Cattolica.

According to the text published Sept. 21, Pope Francis greeted the 53 Slovak Jesuits and expressed surprise at how many were present in the country.

“I didn’t know there were so many Jesuits here in Slovakia. The ‘plague’ is spreading everywhere,” the pope said jokingly.

When asked how he was feeling a month after undergoing intestinal surgery, the pope said he was “still alive even though some people wanted me to die.”

“I know there were even meetings between prelates who thought the pope’s condition was more serious than the official version. They were preparing for the conclave. Patience! Thank God, I’m all right,” he said.

Asked what should be the centre of the Jesuits’ pastoral work in Slovakia, the pope said the word “closeness” came to mind; closeness to God in prayer, to each other and to the people of God is crucial in their mission.

He also emphasised the need for them to be close to their bishops, even with those “who don’t want us.”

“If a Jesuit thinks differently from the bishop and has courage, then let him go to the bishop and tell him what he is thinking. And when I say bishop, I also mean the pope,” he said.

Another Jesuit asked the pope about his words regarding “diabolical ideological colonisation,” specifically his criticism of gender theory.

The pope warned that “ideology always has a diabolical appeal,” which must be exposed, and said gender theory is dangerous because “it is abstract with respect to the concrete life of a person, as if a person could decide abstractly at will if and when to be a man or a woman.”

“Abstraction is always a problem for me,” he said. “This has nothing to do with the homosexual issue, though. If there is a homosexual couple, we can do pastoral work with them,” helping them grow in faith and their relationship with Jesus.

“When I talk about ideology,” he said, “I’m talking about the idea, the abstraction in which everything is possible, not about the concrete life of people and their real situation.”

Pope Francis was also asked about how he deals with criticism against him by “people who look at you with suspicion.”

Without naming it, the pope said there was “a large Catholic television channel that has no hesitation in continually speaking ill of the pope” and that while he feels he personally deserves “attacks and insults because I am a sinner,” the Catholic Church does not.

“They are the work of the devil. I have also said this to some of them,” he said.

Pope Francis also commented on his recent apostolic letter “Traditionis Custodes” (“Guardians of the Tradition”), which restored the obligation that priests have their bishop’s permission to celebrate Mass using to the “extraordinary form” or pre-Vatican II ritual.

The pope said the “phenomenon” of young priests who “after a month of ordination go to the bishop” to ask to celebrate in Latin was an indication “that we are going backward.”

He also recalled the response of one cardinal who was asked for permission by two newly ordained priests to learn Latin to celebrate the “extraordinary” form of the Mass.