The Southern Cross: 101 Years and Counting 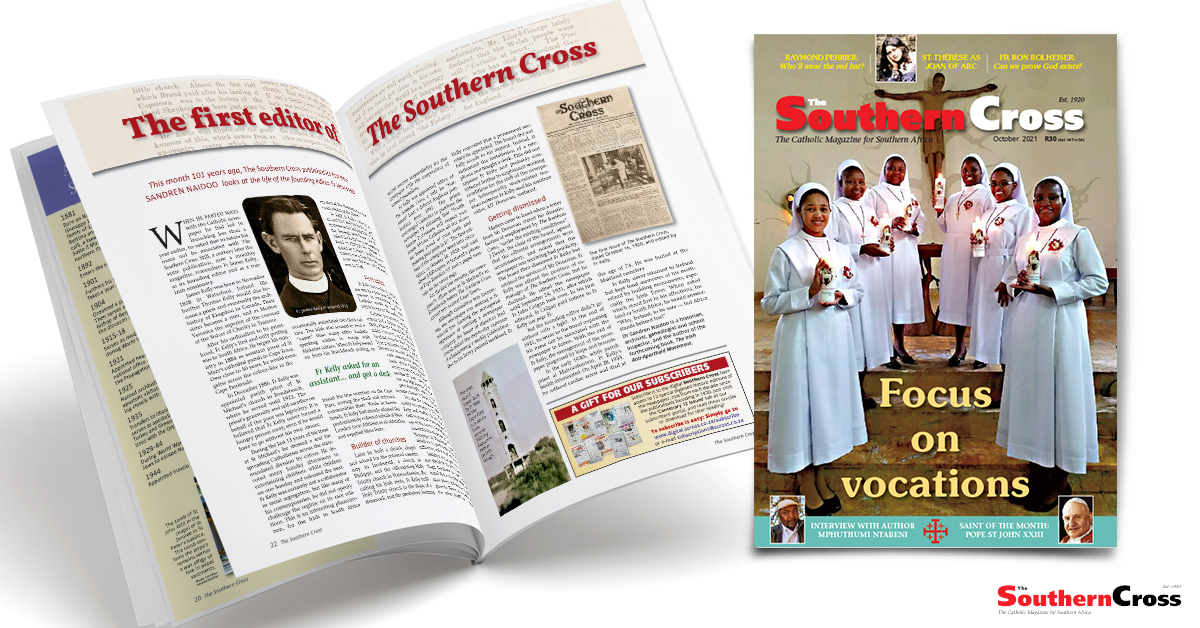 It is just over a year ago that The Southern Cross published for the last time as a weekly newspaper. That final edition appeared, in digital format, only a few weeks short of the publication’s centenary in October. But the Holy Spirit didn’t allow The Southern Cross to fade away. The title marked its 100th anniversary by relaunching as a monthly magazine. And we are still here today, at the age of 101!

There is no vainglory in describing this as a minor miracle. The magazine has survived its first year with no subsidies, no financial reserves, and with cash that trickles rather than flows. We have survived two lockdowns this year, during which all churches were closed. And we are still here! Surely the Holy Spirit has carried us over the treacherous waters so that The Southern Cross may continue to fulfil its important role in the apostolic life of Southern Africa’s Catholic Church — both as a monthly magazine and through its lively digital presence.

But for The Southern Cross to continue doing so will require the support of the Catholic community: from the bishops, clergy, religious and laity. Such support can be material — our Associates Campaign is a good way of ensuring the magazine’s economic survival. But, just as importantly, we need the Catholic community to promote the magazine. Parishes and sodalities play a crucial role in helping to build interest in and enthusiasm for The Southern Cross. (Download banners for social media to share) . Let’s shout the merits of the magazine from the rooftops — and the pulpits!

One way of doing so is by sharing widely our free special digital anthology edition, which showcases some of our best items over the past year. It will come out on October 12. Unlike the monthly issues, this special edition may be circulated widely — indeed, please share it with many people by whatever means, so that they may get to know The Southern Cross.

The feedback we have received over the past year indicates that, in content and presentation, we are on the right track. For example, the writer of one e-mail from the United States — where there is a broad variety of Catholic publications — told us that he wished there was something as good as The Southern Cross where he lives.

We believe that in every issue, there is something for every Catholic, and some things for all Catholics.

Perhaps the greatest threat to The Southern Cross resides in that favoured tool of the devil — indifference. Sadly, that particular spiritual malaise has infected much of the Church, especially in the area of social communications.

Imagine the early Church leaders had been indifferent to the writings of the evangelists, or discouraged reading the Church Fathers! How are we to evangelise if we do not use the tools of social communications? These include the printed media, which have a greater permanence than short-lived posts on social media or blogs.

Where is the sense of Catholic identity when — contrary to the appeals of successive popes — only few Catholic homes have a Catholic publication on the proverbial coffee table?

Guided by the Holy Spirit, we hope to help overcome that indifference by continuing to produce, for many more years yet, a quality magazine that edifies, evangelises, elucidates and entertains.

We are most grateful to those who are already supporting The Southern Cross with such love and enthusiasm.

Thank you for reading The Southern Cross, and please pray for us in our social communications apostolate.