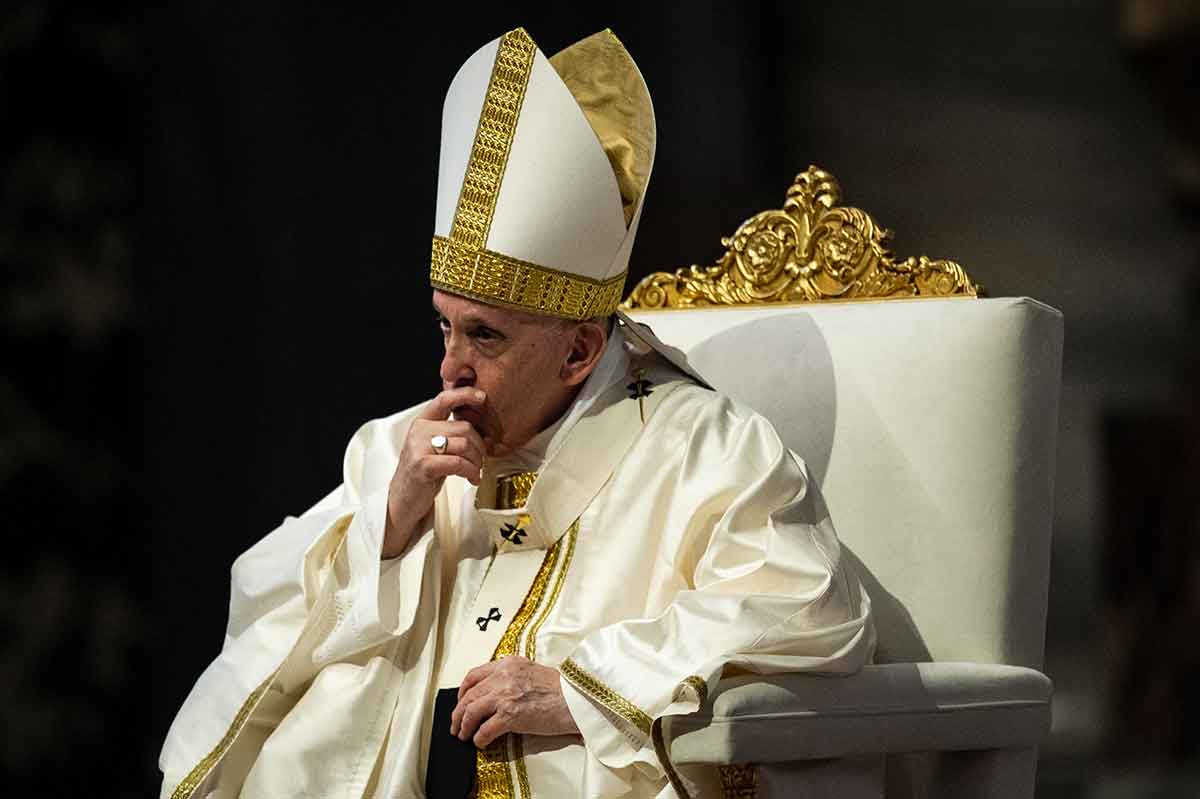 Pope Francis listens during the opening Mass of the plenary assembly of the Council of European Bishops’ Conferences at the Altar of the Chair in St. Peter’s Basilica at the Vatican on Sept. 23, 2021. (CNS photo/Cristian Gennari, pool)

By Cindy Wooden – Bishops and others in the Catholic Church often lament the declining number of Christians, but rarely do they examine their own behavior and failure to show others how much God loves them, Pope Francis told the presidents of European bishops’ conferences.

“Consider how many people no longer hunger and thirst for God! Not because they are evil, but because there is no one to awaken in them a hunger for faith and to satisfy that thirst in the human heart,” the pope said Sept. 23 as he concelebrated the opening Mass of the plenary assembly of the Council of European Bishops’ Conferences.

“So many people are induced to feel only material needs, and not a need for God,” the pope told his brother bishops during the early evening Mass at the Altar of the Chair in St. Peter’s Basilica.

“Certainly, we are ‘preoccupied’ by this, but are we really ‘occupied’ with responding to it?” Pope Francis asked.

“It is easy, but ultimately pointless, to judge those who do not believe or to list the reasons for secularisation,” the pope said. Instead, “the word of God challenges us to look to ourselves. Do we feel concern and compassion for those who have not had the joy of encountering Jesus or who have lost that joy? Are we comfortable because, deep down, our lives go on as usual, or are we troubled by seeing so many of our brothers and sisters far from the joy of Jesus?”

The plenary of the Council of European Bishops’ Conferences brought together the presidents of 33 national bishops’ conferences and a dozen other Eastern- and Latin-rite bishops from across the continent. The meeting Sept. 23-26 was to celebrate the council’s 50th anniversary and review its service to the continent in the light of Pope Francis’ encyclical, “Fratelli Tutti, on Fraternity and Social Friendship.”

After the Mass, the bishops were to renew their profession of faith at the tomb of St. Peter and pray at the tombs of St. Paul VI, Pope John Paul I and St. John Paul II – the popes who accompanied the early years of the council’s existence.

Using the images of rebuilding homes and the temple in the day’s first reading from the Book of Haggai, Pope Francis said in his homily that just as the ancient Israelites had to “stop being content with a peaceful present and start working for the future,” so must the people of Europe.

The founders of the European Union “did not seek a fleeting consensus, but dreamed of a future for all,” the pope said, and only that kind of farsighted vision can ensure a consolidation of peace, freedom and solidarity on the continent.

“The same is true for the church, the house of God,” he said. “To make her beautiful and welcoming, we need, together, to look to the future, not to restore the past.”

Of course, Pope Francis said, any idea of “rebuilding” the church must begin with the church’s foundation, “the church’s living tradition, which is based on what is essential, the Good News, closeness and witness.”

“We need to rebuild from her foundations the church of every time and place, from worship of God and love of neighbour, and not from our own tastes, not from pacts or deals that we make to ‘defend the church’ or ‘to defend Christianity,'” he said.

In the reading from Haggai, he noted, the verb form of “rebuild” is plural – a call to all the people.

“All rebuilding takes place together, in unity, with others,” Pope Francis said. “Visions may differ, but unity must always be preserved. For if we keep the grace of the whole, the Lord keeps building, even when we fall short.”

“This is our vocation as pastors: to gather the flock, not to scatter it or to keep it enclosed by fine fences,” he said. “Rebuilding means becoming artisans of communion, weavers of unity at every level: not by stratagems but by the Gospel.”

The challenge is huge, the pope said, because so many Europeans see religious faith as “a relic from the past.”

The reason, he said, is that “they have not seen Jesus at work in their own lives,” and “often this is because we, by our lives, have not sufficiently shown him to them.”

“If Christians, instead of radiating the contagious joy of the Gospel, keep speaking in an outworn intellectualistic and moralistic religious language, people will not be able to see the Good Shepherd,” the pope said. “They will not recognise the one who loves each of his sheep, calls them by name, and bears them on his shoulders.”

“Jesus does not ask us to make arguments for God, but to show him, in the same way the saints did, not by words but by our lives,” Pope Francis said.