Will South Africa Get a New Cardinal? 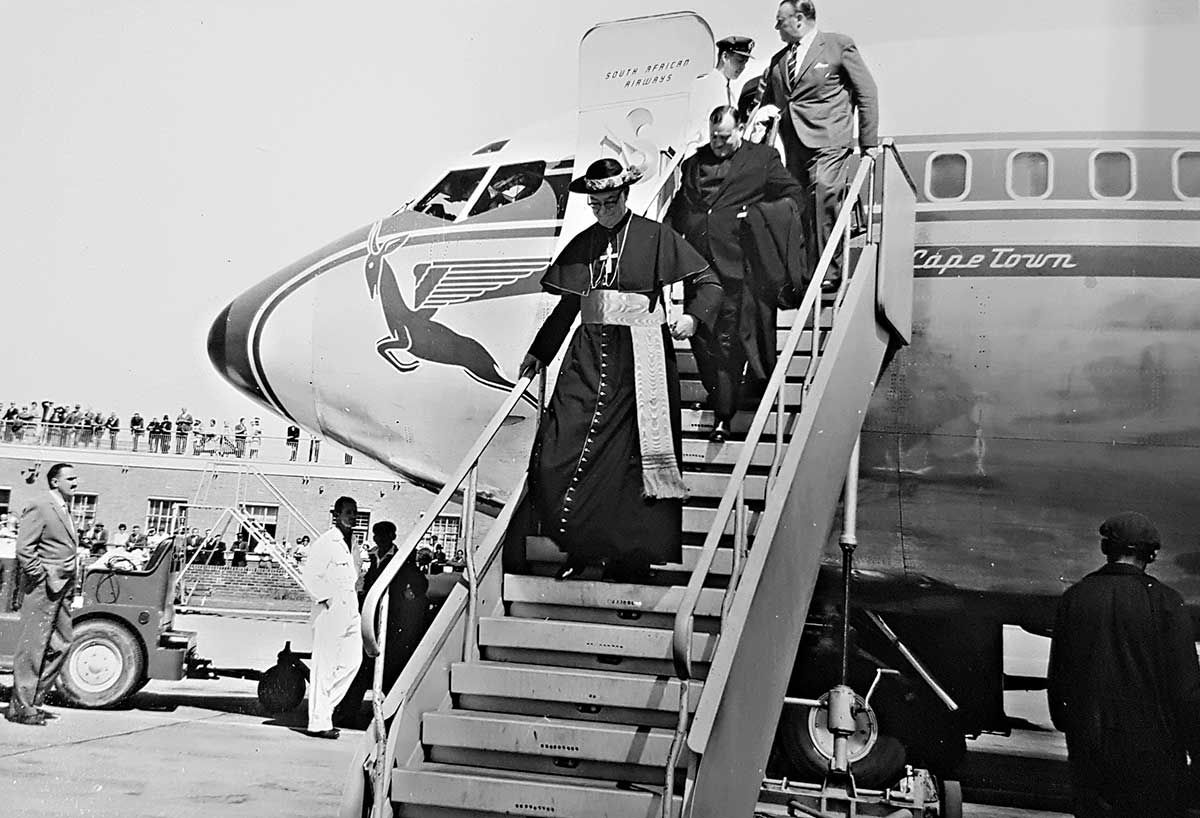 Cardinal Owen McCann lands in Cape Town in February 1965 after returning from Rome, where he became South Africa’s first cardinal. Behind him is his secretary, Fr Jerry Morrow.

Question: With Cardinal Wilfrid Napier’s retirement as archbishop of Durban, will his successor, Archbishop Siegfried Mandla Jwara, become a cardinal?

Answer: That is entirely up to the pope — and Francis has a way of defying all expectations when it comes to awarding the “red hat”. So far, South Africa has had only two cardinals: Owen McCann of Cape Town (elevated in 1965) and Wilfrid Napier of Durban (2001).

Between the death of the former in 1994 and appointment of the latter, almost seven years had lapsed.

There are various criteria that influence the appointment of cardinals, whose basic function is to serve as counsellors to the Holy Father and to elect his successor. Here are some of the important ones, but since appointments to the College of Cardinals are the pope’s prerogative, he need not explain his choices.

Curial Appointments: Certain dicasteries (or departments) in the Roman curia are required to be headed by a cardinal. If an appointee to such dicasteries isn’t a cardinal yet, he will be made one at the soonest consistory (the meeting at which cardinals are officially raised to their new rank).

Cardinalate Sees: These are dioceses whose archbishops traditionally are expected to be made cardinals, such as Venice, Paris, Madrid, Philadelphia and so on. But Pope Francis often bypasses these dioceses and appoints bishops from smaller dioceses or countries that have never had a cardinal. In any case, neither Cape Town nor Durban can be considered a cardinalate see; South Africa’s next cardinal could come from any diocese, or even from Botswana or Eswatini, which form part of our local bishops’ conference.

Leadership Qualities: Some people just stand out as great leaders, regardless of the diocese they are heading. And here we note that newly-appointed cardinals usually are bishops already. Pope Francis was happy to bypass this unwritten rule when he named Fr Michael Czerny SJ to the College of Cardinals in 2019 (in line with the norms, Czerny was consecrated as a bishop the day before the consistory).

Public Expectations: Sometimes a pope’s hand is forced by public pressure. That was the case in 2001, when Pope John Paul II excluded Archbishop Karl Lehmann, then president of the German bishops’ conference, from a list of 39 new appointees (which, incidentally, included the future Pope Francis). The outcry by the German press and Church leadership persuaded the pope to publish a second list with five additional appointees a week later. This list did include Archbishop Lehmann, as well as Archbishop Napier of Durban. According to a veteran Vatican correspondent at the time, a Southern Cross article which had briefly bemoaned the absence of a Southern African name on the original list of cardinals helped persuade the pope to include the archbishop of Durban on his second list — a sign that the Holy See has an open ear for the views of the Catholic press.

Long-Service Reward: Often a pope will award a red hat to priests who are over the age of 80 — and therefore too old to participate in a conclave — as a recognition of their distinguished service to the Church. In 2016, for example, Pope Francis named 87-year-old Bishop Emeritus Sebastian Khoarai OMI of Lesotho a cardinal, in honour of his long episcopal service and witness to Christ. And last year, the pope made 86-year-old Capuchin Father Raniero Cantalamessa a cardinal, in appreciation of the priest’s long service as the preacher of the papal household.

So, in short, there is no way of knowing whether or when another South African might become a cardinal, or where he might come from. But we may pray that if a pope should choose a cardinal from South Africa’s episcopate, his choice will be wise and fruitful.