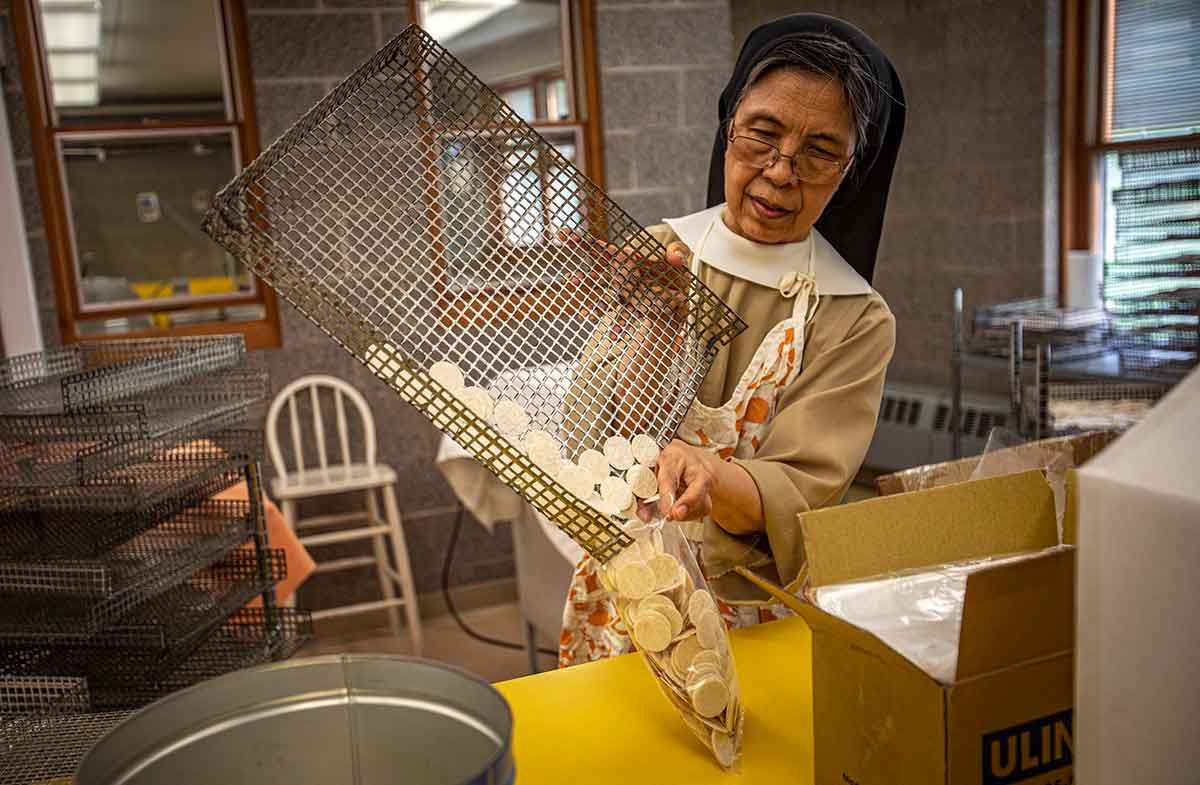 Sister Isabel Macarilay, a Poor Clare, fills a bag of freshly baked and cut altar bread in the bakery at the Monastery of St Clare in Langhorne, Pennsylvania, July 21, 2021. The monastery produces up to 3 million altar breads a year, selling what may eventually become consecrated hosts to parishes throughout Pennsylvania and other parts of the US (CNS photo/Chaz Muth)

By Carol Zimmermann – Holy Communion – so sacred and central to the Catholic faith – has simple beginnings with the religious sisters who make these altar breads both as a ministry and a means to support themselves.

At the Monastery of St Clare in Langhorne, the sisters have been baking altar bread five days a week for more than 100 years.

At the monastery, outside Philadelphia and tucked directly behind a suburban neighbourhood, the Poor Clare sisters start their days at 5:30 a.m. and spend a few hours in prayer before they begin their work for the rest of the morning.

At work, the sisters silently operate machines that churn together flour and water and then bake this mixture in a press which forms the thin circular wafers that they transfer to a drying oven and separate, count and place in bags for shipment.

In the sisters’ very warm kitchen – with a sign on the entrance that says “Altar Bread Department” – the aroma of freshly baking bread fills the air.

All around are reminders of the faith with religious symbols and images on the grey brick walls, small Mary statues by the coffee and tea counter, and machines with names on them such as “archangel” or “JP2” for St. John Paul II.

While they work, the sisters meditate or pray for those who will receive these breads.

The silence is intentional. Poor Clare Sister Anne Bartol, originally from Louisiana, said the sisters follow the tradition of St Clare, who said the sisters “should always work with their hands and in common,” but she also envisioned community work to take place in silence “so that you can also meditate while you work.”

Sister Anne – a 57-year-old with a finance degree and an MBA who manages the altar bread operation – said “everything coalesced” for her with this vocation and its particular ministry.

She spoke with Catholic News Service in late July, after a baking shift, about the work these sisters do and its connection to something bigger.

The sisters have sought to be more efficient in their work. They’ve observed techniques of other sisters who also make altar breads and the Italian makers of the machines they use visited them to personally deliver and explain updated equipment.

They had a drop in orders during the pandemic but are now picking back up again.

But this ministry, which Sister Anne described as a privilege, is just part of their vocation; it’s what supports them but it also directly links them to the life of the church.

“Our main work is always prayer,” said Sister Anne. “That’s how we’ve been called to give ourselves to God for the world.”

The nine sisters who currently live in the monastery, and range in age from 55 to 94, are cloistered, so by the very nature of their calling, they are separated from the world at large except for their contacts in parishes that buy their breads, those who come to the monastery to join them for daily Mass and the UPS man whom Sister Anne said they are “on a first-name basis with.”

But even with their isolation, they are well aware of the discussion in the church about Communion in recent months and they also know that not all Catholics fully understand what Communion means.

As Sister Anne sees it, discussion about the Real Presence is a way for God to work because it shows how “Catholics need to be awakened to the understanding – more than head knowledge” of what they are receiving in the Eucharist.

She gets that some people don’t understand this fully and said that was her own experience when she was young.

In the ’70s, when she was growing up, she said, “we weren’t really educated well in the Real Presence. And I didn’t know what I was doing in my first Communion.” She said she ended up learning that Communion was not just symbolic from a good friend in high school.

And today, that understanding of the gift of Communion, as she describes it, is something she continues to think and pray about while doing the very practical work of making sure machines are working properly or orders are being filled correctly to get the breads to parishes that will eventually become consecrated hosts.

In the back room, just behind the kitchen, she takes new orders and processes the regular ones.

This room, like the kitchen, has holy images on the walls taped alongside papers with shipping information, pricing sheets and the phone numbers of local electricians.

In this office/mailing room, the mundane and the holy come together as they do in the baking area.

On a large table in the middle of the room filled with cardboard boxes, shipping labels and containers of altar breads, a card with strands of wheat and a message in calligraphy pretty much sums up the sisters’ ministry.

It says: “Lord give bread to the hungry and hunger for you to those who have bread.”