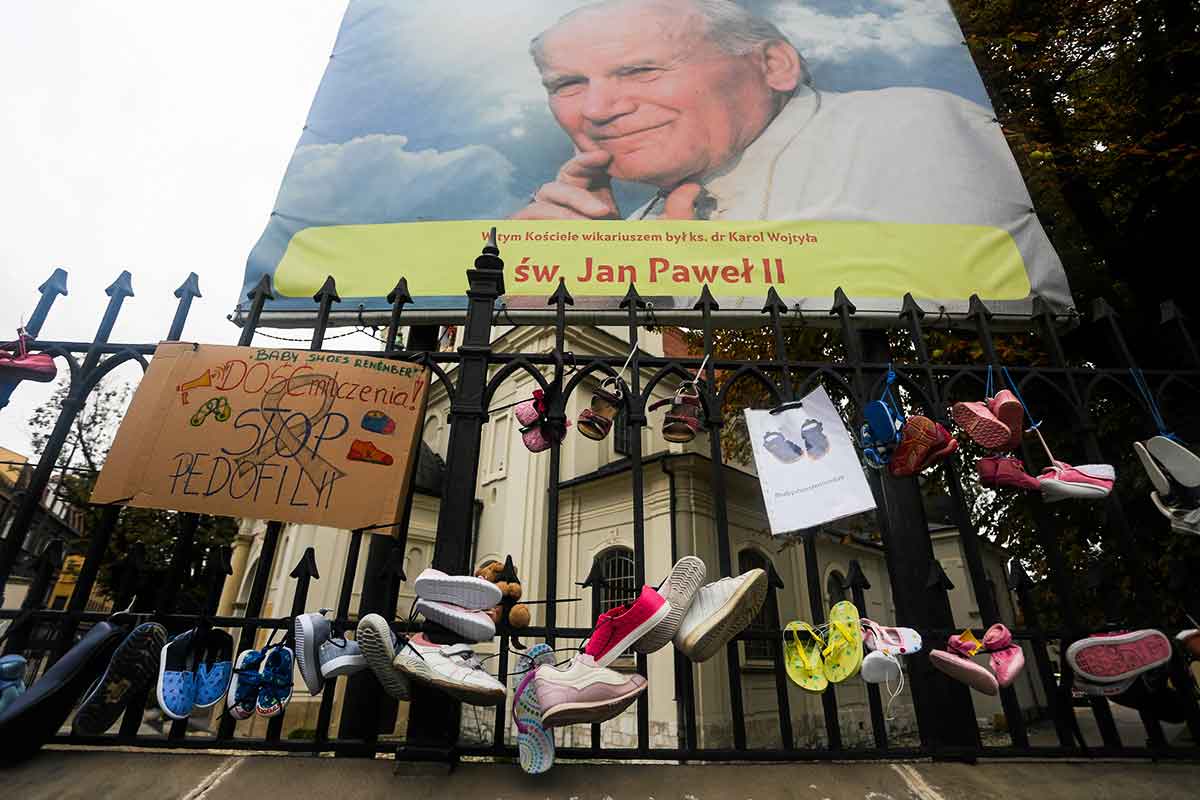 An image of St. John Paul II is pictured near baby shoes attached to a fence outside a church during action against paedophilia, “Baby Shoes Remember,” in Krakow, Poland, Aug. 26, 2018. (CNS photo/Jakub Porzycki, Agencja Gazeta via Reuters)

By Jonathan Luxmoore – The president of the Polish bishops’ conference said that in meetings with a Vatican official, several church leaders criticised the Vatican’s handling of sex abuse cases, particularly “disproportionate punishments” inflicted on bishops accused of cover-ups in comparison with convicted abusers.

“Our task is to work with the Holy Father in clearing up our church’s current situation, which has undermined trust among certain people,” Archbishop Gadecki told KAI after the meeting with Cardinal Ouellet. The meeting was part of the bishops’ “ad limina” visit to meet with Vatican officials every five years.

“But critical remarks have been made about the Holy See’s treatment of bishops who’ve had punishments imposed for shortcomings, transgressions or acts of forgetfulness in dealing with clergy accused of paedophilia. Some (Polish bishops) highlighted the disproportionate, lasting penalties imposed on bishops after initial investigations, when paedophile criminals can leave prison after five years and begin a new life with a clean sheet.”

He told KAI: “We’re talking about the civil death of an accused hierarch who isn’t a paedophile, who’s removed from office, falls into infamy and is effectively annihilated by the media. The cardinal was rather surprised by my words. But he accepted we were not being aggressive toward the Holy See, just asking questions whether all of this conforms with the principle of proportionate guilt and punishment.”

Ten mostly retired bishops have faced sanctions for ignoring abuse complaints in Poland, where allegations of past cover-ups are surfacing.

A Sept. 15 report on the Dominican order, the first commissioned from lay experts, confirmed widespread cover-ups and accused a senior priest, in custody since March, of raping nuns.

Archbishop Gadecki told KAI Cardinal Ouellet pledged to take account of the Polish bishops’ criticisms when procedures set out in “Vos Estis Lux Mundi” were reviewed in 2022. The archbishop said the aim of the review should be “not to release bishops from responsibility for their actions, but to reflect on a possible gradation of punishments.”

The archbishop also told KAI Cardinal Ouellet had warned the Polish church against allowing its clergy to be “drawn into politics” and warned Poland faced a growing problem with priests who “refused obedience” and proclaimed “private opinions, often with great aggression toward the church.”

“Such an attitude is also seen among lay leaders, who take on the role of church arbiters and address criticisms at the church, having no idea about the work of bishops and the challenges they face,” Archbishop Gadecki said.

“Such people wish to become media stars, not for any outstanding wisdom, but rather for their ability to create a certain synthesis based on gossip, which is easily absorbed by the media.”

The “ad limina” visit coincided with the Oct. 13 publication of new Polish church data a 20% drop in new seminarians in the last year and a 60% decrease over a decade ago. Four of Poland’s 41 dioceses and 19 male religious orders reported no vocations at all, while only five would-be priests enrolled at a special national seminary in Lodz for men over 35, the lowest figures since World War II.

Father Piotr Kot, chairman of the Conference of Higher Seminary Rectors, told KAI Oct. 13 that the decrease reflected a “lack of suitable role models in the parental home,” as well as “early addictions, personality problems and identity disorders,” but also had been exacerbated by “negative images of the church and priesthood” caused by sexual abuse.