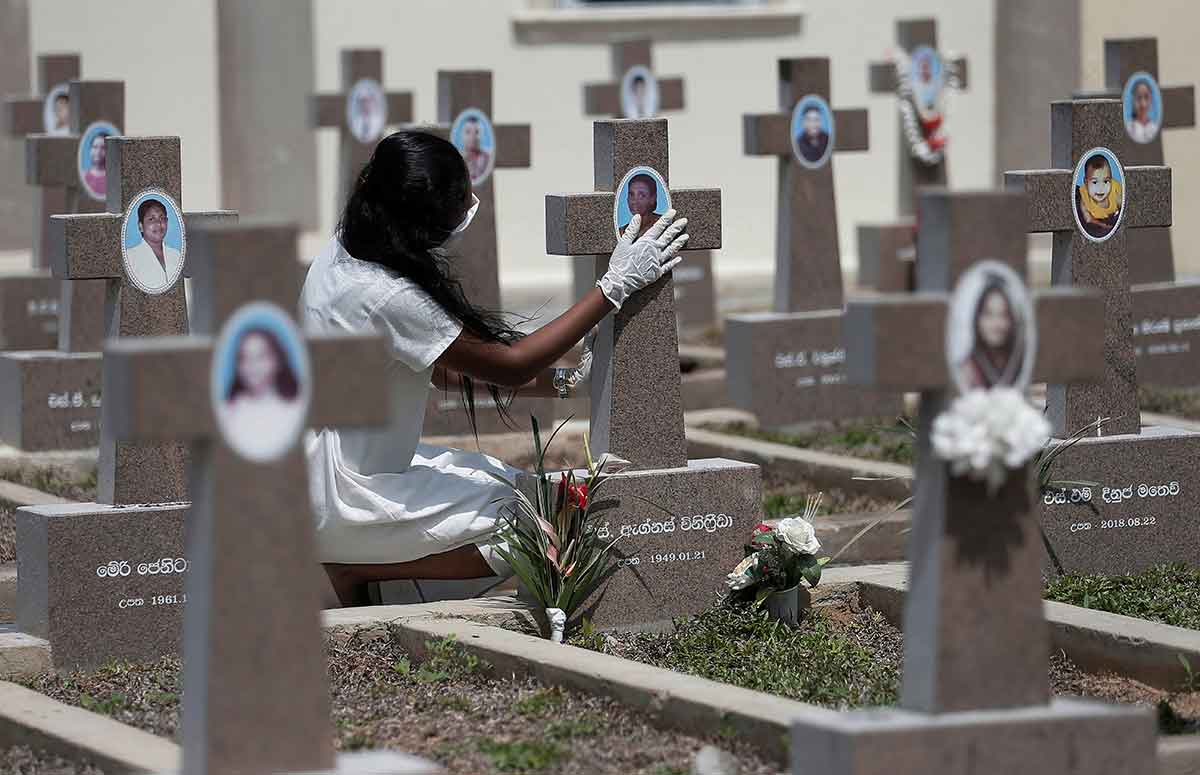 A woman touches the grave of a family member outside St Sebastian Church in Negombo, Sri Lanka, on April 21, 2020, the one-year anniversary of the Easter bomb attacks. As an investigation into the 2019 bombings continues, Pope Francis expressed solidarity with the Sri Lankan Catholic Church, Cardinal Malcolm Ranjith of Colombo said Oct. 24, 2021. (CNS photo/Dinuka Liyanawatte, Reuters)

Pope Francis has expressed his support for the Sri Lankan Catholic Church in its attempts to seek justice for the victims of the 2019 Easter bombings.

“His Holiness Pope Francis has sent me a letter in his own handwriting in Italian asking what action the Sri Lankan Catholic Church requires from the pope regarding the investigation into the Easter Sunday attack,” Cardinal Malcolm Ranjith of Colombo said.

The cardinal described the contents of the letter during an Oct. 24 online briefing on the investigations organised by the Australian-based Sri Lankan Justice Forum, which advocates for victims of the attack, ucanews.com reported.

The pope promised to pay close attention to developments, to pray for the people of Sri Lanka and to extend support to all those who seek justice, the correspondence said.

“As you know, the Holy Father is aware of the situation and is very supportive of us,” Cardinal Ranjith added.

The cardinal read excerpts from the letter in which the pope said the “situation makes me very sad.”

“I promise to pray more and remain ready to do whatever you consider opportune. Tomorrow I will speak with the secretary of state about it,” the letter said.

“I remember how in those days you were so courageous as to prevent any vengeance by the Christians and you went with the imam of the Islamic community to meet them so that they may witness the friendship among yourselves. I do not forget that example of a shepherd. … Please count on me and indicate what would be best to be done from here,” the pope wrote.

Cardinal Ranjith repeatedly has expressed unhappiness with the lack of progress of law enforcement investigations into the attack and attempts by the government to undermine them.

Sri Lankans abroad have organised demonstrations, including during recent state visits by Sri Lankan President Gotabaya Rajapaksa to attend the U.N. General Assembly in New York City and by Prime Minister Mahinda Rajapaksa to Italy. The protests have focused on the lack of justice for victims of the April 21, 2019, bombings of two Catholic churches, a Christian church and three hotels in which more than 300 died and hundreds more were injured.

Catholic officials in Sri Lanka have repeatedly sought transparency in the investigations and judicial process related to the attacks. Cardinal Ranjith earlier informed the Vatican about church concerns and has been assured they will be taken up at the U.N. Human Rights Council in Geneva.