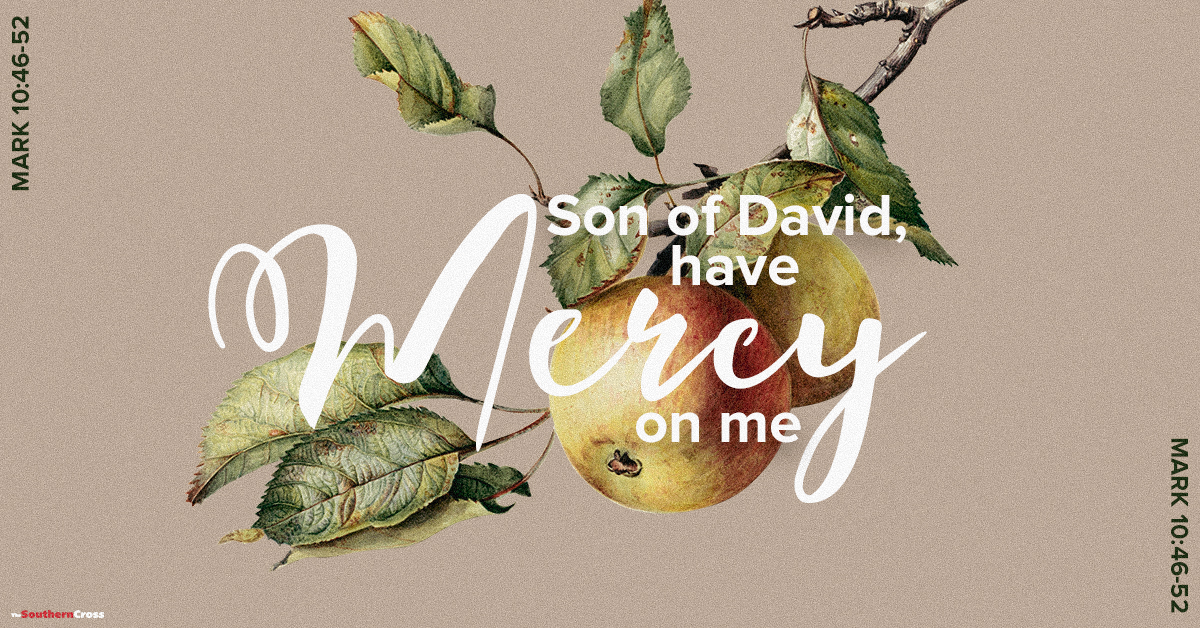 Theme: Healing Hand of God! A Call to Discipleship!

Point of Reflection: As Christians, we need to open our hearts to allow Christ to heal us. This requires true faith. Bartimaeus knew and believed in Jesus. His plea for sight was a plea for the restoration of his ability to follow Jesus. Such faith qualified him for discipleship, an opportunity which he fully embraced. Those who, like Bartimaeus, experience Jesus’ restorative grace and become his disciples can truly sing with the Psalmist, “the Lord has done great things for us”.

Sermon (Reflection):  Today’s Gospel story unfolds as Jesus draws near to Jerusalem. As he passes Jericho, a blind beggar, Bartimaeus, calls out to him with a plea for mercy. He addresses Jesus first as “the son of David”, and then as “my teacher.” This reveals that Bartimaeus already has a good idea of who Jesus is. He believes that, as David’s son, Jesus fulfils the messianic hopes for a restoration of the nation.

Calling him a teacher, Bartimaeus confirms his faith that Jesus represents and teaches God’s ways. Therefore, the blind man does not merely beg for restoration of his physical sight, he seeks to have his entire life changed, as is revealed by two other aspects of the story.

First, the crowd tries to silence Bartimaeus’ cries. But this powerless and incapacitated man persists and shouts even louder. He knows that this is his only chance for restoration and that Jesus is the only one who can effect it. Second, when Jesus calls him, Bartimaeus throws away his cloak. The cloak was likely his most precious possession. It kept him warm at night and the alms he collected were likely to be hidden somewhere in that heavy covering.

Throwing his cloak off, Bartimaeus symbolically discards his former life and the little security he had, and places all his hopes in Jesus. The healing that followed was the result of his faith, as Jesus himself affirmed.

The outcome of the healing was a foregone conclusion. Bartimaeus does not go off to seek a better life for himself, apart from Jesus. He is restored to health and begins a new life by attaching himself to Jesus. He becomes one of the disciples, with his new life focused on and governed by Jesus. His knowledge of and faith in Jesus enabled him to become a disciple.

This is the basic call for us Christians today to leave our old bad ways and embrace new good ways with Christ. We need to reposition ourselves to see Christ and receive healing from Christ.

As Christians, we are also blind in one way or another: we to shout to the Lord in prayer for healing. We need to be healed in Jesus Christ’s name.

In today’s passage from the letter to the Hebrews, the second reading looks at the qualifications for serving as a priest. The Israelite priests, first and foremost, had to come from the tribe of Levi; their priesthood was their birthright. The high priest not only had to be a Levite, but also had to come from the family descending directly from Aaron. Such a high priest shared humanity with those whom he represented before God. Thus, he was a sinful man who had to offer sacrifices for his own sins as well as for those of the people.

The author of Hebrews contrasts the Israelite high priest with Jesus, the high priest of the new covenant. Jesus did not come from the family which would qualify him for the priestly office, he was not a Levite. How then could we call him the high priest? The author explains this by citing two significant OT passages.

First, he appeals to Psalm 2:7 which establishes Jesus’ parentage.

In the words of the Psalm, Jesus Christ traces his origin to God himself, he is God’s only begotten son. As God’s Son, Jesus is perfectly qualified to serve as the high priest in the heavenly sanctuary.

The second passage appeals to Melchizedek. Quoting Psalm 110:4, the author describes the appointment of Jesus to the office of the priest by God’s solemn pronouncement. He was appointed as a priest in the “order of Melchizedek”. Melchizedek was a mysterious priest-king who had “neither beginning of days nor end of life” (Heb 7:2-3)—he is an eternal priest. Jesus’ priesthood, like that of Melchizedek, is permanent. Every human priest will die, but Jesus’ priesthood is unending as he himself is eternal. His credentials for the office of priest are his divinity as God’s Son, and the divine appointment by his Father for a permanent priesthood.

The first reading comes from the part of the book of Jeremiah known as “the book of consolation” (Cf. Jeremiah chapters 30 – 31). The literary form of this text is recognised as an “oracle of salvation”. By offering a reassurance of future salvation, oracles of salvation usually aimed to console the Israelites who had been torn away from their country. The prophet delivered this particular oracle in response to the destruction of the Israelite kingdom, and a massive deportation of its population known as the Babylonian exile. Jeremiah consoles the exiles by speaking about “the remnant of Israel”.

The remnant are those exiles who remained faithful to God and the Law in the foreign lands. This remnant would eventually return to the Israelite homeland and begin the project of rebuilding and restoration. The prophet describes this group in three significant ways.

Firstly, the remnant would recruit from the members of the tribes of Judah and Ephraim. The names of these two tribes stand for the two parts of the Israelite kingdom – the North and the South, which both suffered the same tragic fate at different times in history. Those who return will represent and embody the entire nation.

Second, the remnant would include the people who were normally marginalized and shunned by the community. The blind and the lame, because of their physical defects, were excluded from full participation in the life of the community, and could not perform priestly services, even if they were Levites. Women who had just given birth were considered ritually impure and unable to enter the Temple. By including such individuals among the remnant, Jeremiah emphasises that neither social nor religious deficiencies will play a part when it comes to restoration. Even more significantly, these marginalized people were clearly incapable of defending themselves or fighting for freedom. By their inclusion, the prophet emphasises that the remnant would be empowered by God and that the restoration will be God’s own project, carried out by those chosen for that purpose.

Finally, there is one common and basic requirement for all those who form the remnant. In the last verse of the passage, the prophet portrays the remnant as coming back to the land “with weeping”. The exile happened because the Israelites severed their covenantal relationship with God by various acts of idolatry. The remnant comes back with tears because it understands and acknowledges the past mistakes, and weeps in repentance.

Repentance and the wholehearted return to God are the necessary conditions to be counted among the remnant and to be numbered among the membership in God’s restored covenant community.

Christian Act in Word of God “Qualifications for discipleship”

It is interesting to notice that Today we consider the issue of how one qualifies for the honour of discipleship. Are there any special qualifications that make one eligible to be counted among God’s people, a member of the Church, or a disciple of Christ?

We are used to thinking that all people, being equal, qualify for discipleship. This is true. However, today’s readings teach that there are certain responses demanded of a person in order to become an authentic disciple.

In many traditional societies, people were chosen for special roles in the community by the virtue of birth. Thus, only the chief’s son could become his father’s successor. The honour ran in the family. In the Jewish society, to serve as a priest one had to come from a particular tribe and family, have no physical defects, and be a male. However, today’s liturgy teaches that birth, physical qualities, and even gender, do not determine or even limit one’s eligibility to be Jesus’ disciple and to follow him.

Learning from our readings, we must acknowledge God’s grace in opening the boundaries of his kingdom to all. Jesus came into the world bringing universal salvation. It is no longer determined by birthright, or by belonging to a particular ethnic group or nation.

Entry into God’s kingdom is not based on something that is given to us independently of us. Rather, it is based on our response to God’s invitation.

In our groups and communities we often consider the qualities of the members, and judge people suitable for one function or another, on the basis of their appearance or status. It is true that often times the capacity for a particular ministry may be determined by the individual gifts or capacities of a community member. But these ministries are but a reflection of our universal call to be Jesus’ disciples and members of God’s kingdom. In this way, we cannot excuse ourselves when we respond to Jesus and his teaching halfheartedly, or when we find excuses for inaction.

An unwilling person, even if otherwise capable, becomes unfit for discipleship.

Thinking about the theme of qualification for discipleship, the parable of the talents comes to mind. The servant who received only one talent was certainly capable of developing it. But he became ineligible for the honour of being the Lord’s servant because he refused to use what he received and to develop it. We are all capable of fulfilling various roles and carrying out various ministries, but how willing are we to act with what we have?

Undeniably, we grow through the efforts we make. By these efforts, we qualify for the great honour of being the disciples of Jesus, and the co-workers of God in the great project of the restoration of the human family according to God’s plan.

While grateful for the numerous possibilities that God presents us with, we must also respond to them by pursuing that which we should value most. As Bartimaeus showed, the supreme goal for our life should be the honour of serving as Jesus’ disciples. We are already capable of discipleship, but it is our determination and desire that makes us fit for it.

Action: I will open my heart to allow Jesus Christ to heal me.

Prayer: Lord Jesus, restorer and healer of the blind, extend your healing touch to me. Cure my blindness and make me a better person so that with clarity of purpose and perception I can follow you closely and practice your teaching faithfully. May I be healed in all diseases I have in my life and help me to do good to others, we ask this through Christ our Lord, Amen.