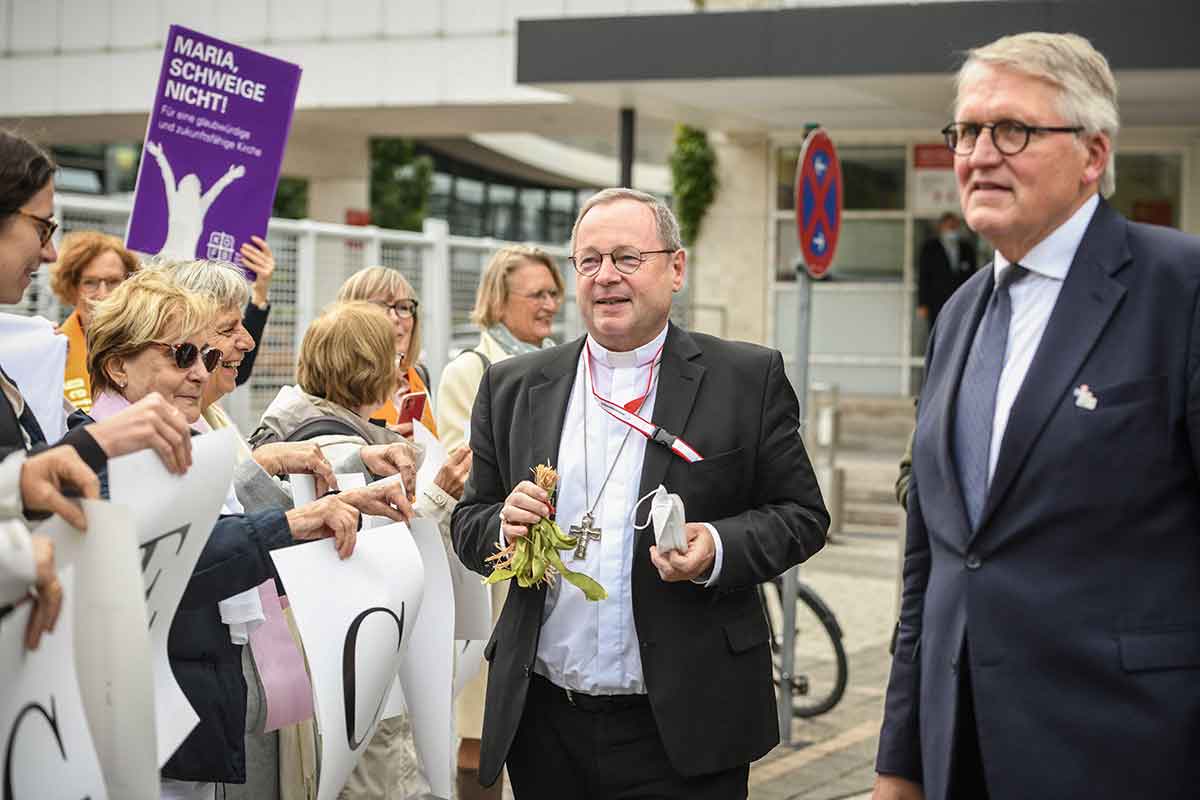 The co-presidents of Germany’s Synodal Path project, Bishop Georg Bätzing, president of the German bishops’ conference, and Thomas Sternberg, president of the Central Committee of German Catholics, speak to women during a protest by Maria 2.0 and We Are Church outside the Synodal Assembly in Frankfurt, Germany, Sept. 30, 2021. The Synodal Path is looking at the role of women in the German church. (CNS photo/Julia Steinbrecht, KNA)

“For us women, the pressure to act is much greater, because we’re excluded more strongly and more fundamentally in many areas, from ministries and from opportunities to shape things,” said Claudia Luecking-Michel, 59, on the sidelines of Sept. 30-Oct. 2 Synodal Assembly.

Luecking-Michel, vice president of the Central Committee of German Catholics, has no illusions: “Of course, no decision can be taken here on admitting women to ordained ministries, but little strokes fell big oaks! If the first bishops are now speaking out in favour of it, that shows a change – and that’s important.”

“It is above all women who still have hopes that something can be changed,” she added. The anger and rage of women was a “vital sign.”

Andrea Heim, executive director of Catholic Adult Education of Germany, said: “It’s not as if a few weird Catholic women want to become priests here. How many women before us have already given up, couldn’t take any more and left in bitterness? This ‘collateral damage’ must give us food for thought. That’s another reason why it’s important to keep at it.”

Her optimism was tempered, however. “Whenever women want to reach for power, men stand in their way. This doesn’t just happen in the church, but it’s more extreme there.”

And where do women get the motivation to keep fighting? Katharina Norpoth, former chairwoman of the Federation of German Catholic Youth, said: “A lot comes from the positive experiences we have had in our associations, where democracy and equal rights are already possible in a church context.”

Women are also making their mark in the Synodal Assembly. Fifty-eight out of 63 voted in favour of the policy paper on reforms of power and the separation of powers. The female approval rate was far above the overall approval rate in percentage terms.

Vincentian Sister Nicola Maria Schmitt said: “I came to the brink with my church one or two years ago.” Other female members of religious orders felt the same way, she said.

She considered leaving, but came to the conclusion, “I don’t want to give up my vocation because of that, my community is too important to me,” more important than the institution of the church and its hierarchy. This also became evident in the course of the Synodal Path discussions.

Some women already made their views abundantly clear in the opening debate on Sept. 30.

“Women in the church are getting desperate, also about the decisions taken in Rome,” said Ulrike Göken Huismann of the 400,000-member Catholic Women Germany. She was referring to Pope Francis’ decision to keep the archbishops of Hamburg and Cologne and two auxiliary bishops of Cologne in office despite the mistakes they had made in their handling of clergy sex abuse.

Another delegate, Gudrun Lux, said she had come to the assembly with a lot of anger and little hope: “What has this church come to, if it is the same here as it is in the world outside: The big guys can do what they want, the little ones are hanged, the big guys are let off the hook.” She said she was hoping to leave the assembly with a changed heart.