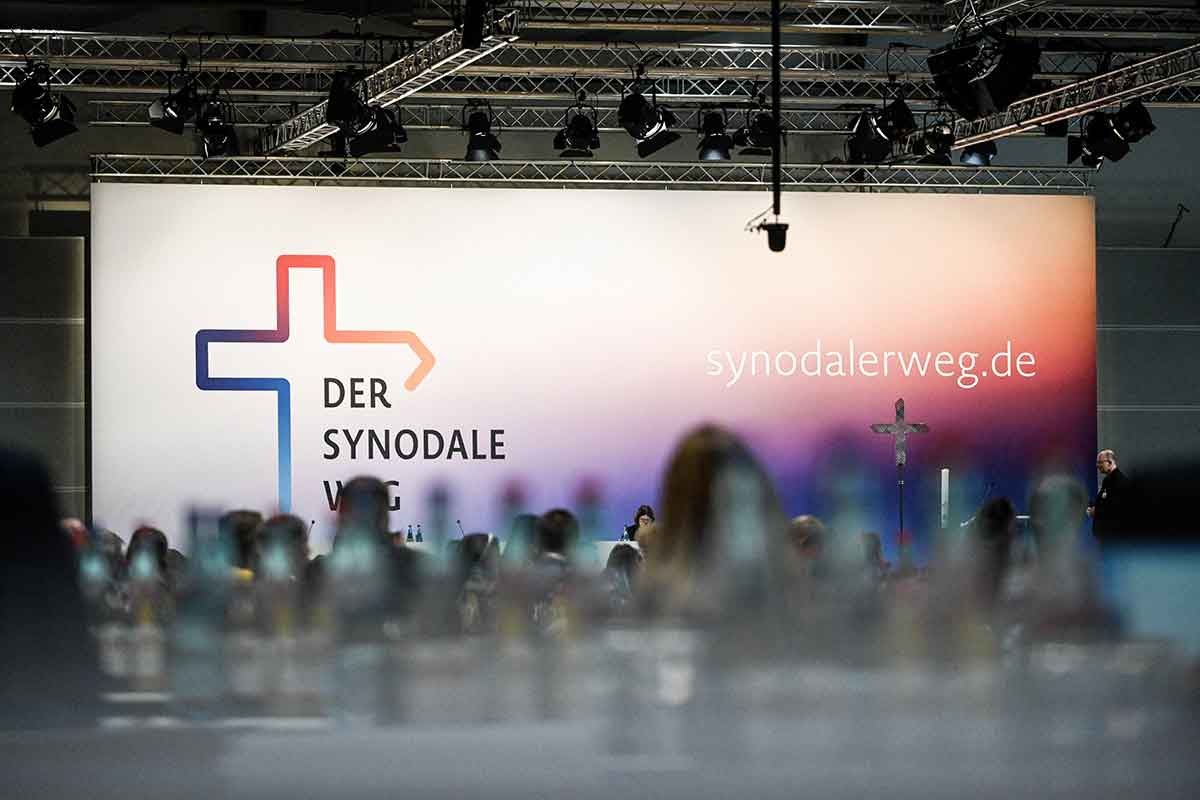 This is a general view of the second Synodal Assembly in Frankfurt, Germany, on Oct. 1, 2021. The assembly, the second of five in the Synodal Path project, ended with overwhelming support for widespread reforms in the Catholic Church in Germany. (CNS photo/Julia Steinbrecht, KNA)

By Anli Serfontein – The second Synodal Assembly of German Catholics ended October 2 with overwhelming support for a range of proposals that, if adopted, would bring widespread reform to the church in Germany.

The assembly – 230 members including laity, academics, clergy and bishops – wrestled for three days in Frankfurt with decisions on which direction the church should take in future.

The German Catholic Church has been struggling to regain its credibility and trust after a decade in which it was rocked by sexual abuse scandals and saw Catholics in large numbers turn their backs on the church.

Bishop Georg Bätzing, president of the German bishops’ conference and co-president of the Synodal Path project, said afterwards: “Texts have been debated that are not just texts, but dreams put into words of how we want to change the church in Germany: a church that is participatory, gender-just and going on this path with the people.”

This was the second Synodal Assembly, the main body of the Synodal Path, the schedule of which has been delayed by the COVID-19 pandemic. Four topics are being discussed: the position of women in the church, future management and division of power, Catholic sexual morality and priestly celibacy.

Because of the workload and the time-consuming discussions and voting, the executive committee has decided to extend the Synodal Path and to add a fifth assembly, scheduled for early 2023.

The assembly considered 13 of 16 texts discussed earlier in synodal forums, and 12 were adopted on first reading. The assembly ended abruptly and unexpectedly an hour earlier than planned when, on the third day, no quorum was in place, because many delegates left early to return to their homes. Those remaining were angry and disappointed.

The delegates voted electronically, and the three days were livestreamed. Speakers were strictly limited to two minutes each. Delegates were seated alphabetically and not according to rank, with some cardinals at the back of the room. Some criticised this arrangement as being “too Protestant” in form.

The texts put to the vote received an approval rating of between 76% and 92%, suggesting that three-quarters of those present were in favour of reforms. However, the decisions of the Synodal Path have no binding legal force in the church.

One text discussed dealt with a new division of power, with more participation of laity and with bishops expected to relinquish some power. There were specific proposals that laity and congregations have a say in the appointment of bishops and that women be admitted to ordained offices.

Cardinal Reinhard Marx of Munich and Freising, who started the Synodal Path process in 2019, summarised: “I think the basic text ‘Power and Separation of Powers in the Church’ is good because it is realistic and doesn’t say we have to change the Codex in the world church, but we can move forward step by step.”

When the participation of the laity in the appointment of the diocesan bishop was discussed, delegates – specifically and openly – referred to the “bad” examples of the dioceses of Cologne and Regensburg, where Cardinal Rainer Maria Woelki’s predecessor, the late Cardinal Joachim Meisner, and Regensburg’s current leader, Bishop Rudolf Voderholzer, were appointed against the express wishes of many Catholics. Cardinal Woelki and Bishop Voderholzer were present at the assembly and listened, but did not speak.

A text on new processes of dealing with victims of sexual abuse was discussed, and Archbishop Ludwig Schick of Bamberg said the process under canon law should be “faster, more transparent and the victims should be involved and heard.” Johannes Norpoth, a spokesman for the Victims Advisory Council, said his own case under canon law took nine years.

Bishops Franz-Josef Overbeck of Essen and Gebhard Fürst of Rottenburg-Stuttgart stressed to the assembly that “the position of a bishop in Germany has been very damaged.”

Bishop Overbeck said in the discussion on the image of priests, “Celibacy has become so much of an exclusion criterion for the clerical ministry that we see now that we have almost no candidates for the priesthood anymore. And this is not just a German problem.”

Claudia Lücking-Michel, a theologian who participated in the same forum, told the German state broadcaster ZDF that it is “Now or never. When otherwise should it (reform) then happen?” The vice president of the Central Committee of German Catholics added, “Because what we experience is, from my point of view, rather a betrayal of the Gospel than good discipleship.”

Thomas Sternberg, president of the Central Committee of German Catholics and co-president of the Synodal Path, said, “We are practising the synodality that the pope calls a constitutive element of the church.”

Sternberg told a post-assembly news conference that he arrived in Frankfurt “with great misgivings, due to the different positions of synod members and the heavy agenda. But … there were fair debates and constructive discussions. I am glad that we have experienced a calm presentation even of controversial positions.”

The assembly had 20 observers from ecumenical bodies and international Catholic organisations. One observer from Luxembourg, Théo Péporté, a former spokesman for the Archdiocese of Luxembourg, told a news conference that the Synodal Path in Germany “will affect the church and it does matter how it turns out.”

The Vatican sent no observers from Rome despite an invitation, but Archbishop Nikola Eterovic, the papal nuncio to Germany, attended the proceedings.

As Archbishop Eterovic was leaving the assembly, Karin Kortmann, vice president of the Central Committee of German Catholics and of the Synodal Assembly, asked him from the stage, “Please do not go yet – your car will wait.”

She thanked him specifically for coming and pleaded that he should report back to the pope “about a more people-friendly and participatory church.” She also raised the issue that the central committee has been waiting for an invitation from the Vatican to discuss the Synodal Path, adding tersely, “And letters, by the way, can be responded to.” She later told a news conference she hopes that the nuncio puts at the end of his report that a meeting with the central committee was “urgently recommended.”

The German Catholic Church counts just over 22 million members and is the largest faith community in the country.