Meet the New Archbishop of Durban 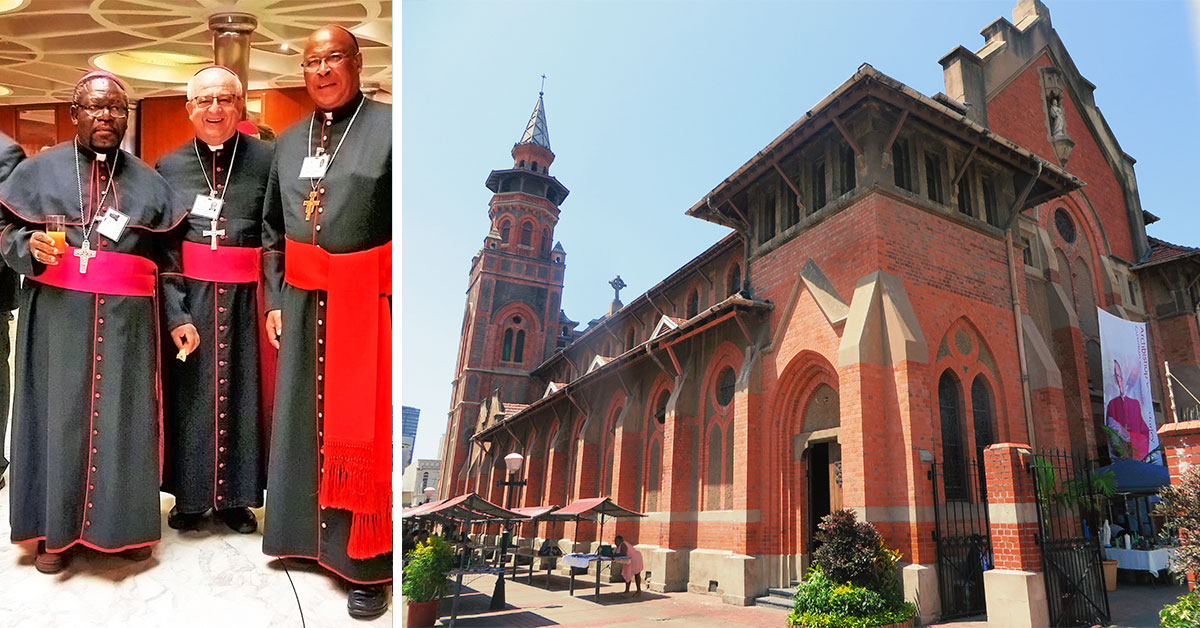 Before the boy was born, a priest made a bold prophecy. Now Archbishop Siegfried Mandla Jwara has been entrusted with heading the Archdiocese of Durban. He spoke to Br Mauricio Langa CMM.

The religious life and priesthood of the new archbishop of Durban was prophesied by a parish priest long before Siegfried Mandla Jwara was even born on February 1, 1957. And that parish priest, Fr Siegfried Schultis CMM, also inspired Archbishop Jwara’s distinctive German first name.

In an interview with The Southern Cross, Archbishop Jwara told the story of how his parents, both still alive, were married. His mother, Desideria Mkhize-Jwara (now 87), had attended a mission boarding school at Himmelberg, outside Umzinto in KwaZulu-Natal, run by Franciscan Sisters of the Daughters of Assisi. His father Alfred (now 89) was a truck driver. Most of the nuns had been convinced that Desideria would become a nun. But it did not happen.

“When my parents got married in 1956, most nuns had mixed feelings and they were somehow disappointed at my mother, as they had hoped that she was going to join the convent,” Archbishop Jwara said. But their anxieties were calmed when Fr Schultis made a prophecy: “Since you did not become a nun, of the first three boys that you will bear, the first one should be named Siegfried — and he will become a priest. The second one should be named Theofried and the third one should be named Reinhold.”

Nobody knows where these other names came from — maybe Fr Schultis’ family members back in Germany — but sure enough, “I was born a boy and was baptised Siegfried, after my parish priest. The second child was also a boy, and likewise the third one, and they were named Theofried and Reinhold respectively, as per the prophecy.” It was after the third boy was born that the family began to believe Fr Schultis’ prophecy.

But the priesthood was not young Siegfried’s initial aim. After he had finished high school at Mahlongwa, he wanted to become a motor mechanic. Mahlongwa was an outstation of Umzinto parish, served at the time by Fr John Driessen CMM who used to come to celebrate Mass there once a month. But when the parish priest would not turn up for Mass, the people at the outstation would ask Siegfried to lead services for them.

“This was like the first calling to priesthood for me. I would tell them I was a shy person and that I could not lead the services. But they pressured me until I accepted. So, already as a high school boy I was nicknamed ‘The Catechist’,” Archbishop Jwara recalled. This involvement in the community at an early age made him think that maybe Fr Schultis’ prophecy had substance. And when the priest learnt that Siegfried wanted to join the Congregation of Mariannhill Missionaries (CMM), “he was extremely happy”. 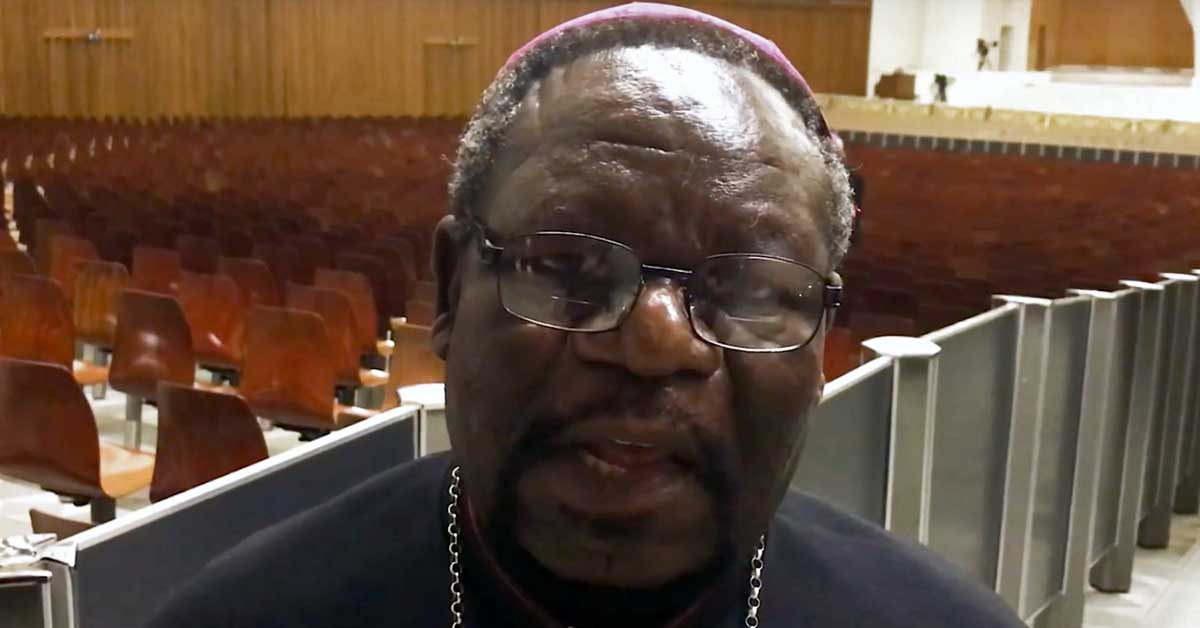 Archbishop Jwara. His surname his pronounced “Joa-kha”, to rhyme with the word “quagga”.(Photo: Fr Russell Pollitt)

The Jwara family, however, had reservations. While Siegfried was doing matric, his father was involved in a terrible car accident and hospitalised as a result. “They wanted me to go and look for a job after matric in order to help at home,” Archbishop Jwara recalled. His determination in the face of a difficult situation at home tested the young man’s embryonic vocation. “It helped me to be serious about my religious vocation and priesthood, because I knew how the situation was when I left home with my father almost dying.”

He entered the pre-novitiate in 1980; his novice master in the Mariannhill congregation was Fr Paul Khumalo CMM, now archbishop emeritus of Pretoria. Following his first profession in 1982, Br Siegfried was sent to St Joseph’s Theological Institute in Cedara to pursue priestly studies, which he completed in 1986. Archbishop Jwara recalled that while undergoing priestly formation, he occupied leadership positions such as the CMM coordinator at the institute and corridor coordinator. “These appointments instilled in me confidence and the ability to work with and organise people,” he said. A challenge he faced at the time was that there were much more senior students, some of whom had been religious Brothers before and were now studying towards the priesthood. “This tested my leadership skills and character at an early age.”

The most important step in Archbishop Jwara’s vocation was his ordination to the priesthood on February 14, 1987. “On the day of my ordination there were people who came from far and wide. Bishop Paul Themba Mngoma of Mariannhill said it was like a prelate’s ordination.” On this special day, his mentor and visionary Fr Schultis was very excited. “I am satisfied and now God may take me,” Fr Schultis said. “He bought me a nice benediction cope which I still have even today,” Archbishop Jwara recalled. Fr Schultis died just over two years later, on October 7, 1989.

Soon after ordination, Fr Jwara was assigned to Clairvaux mission in Impendle, Mariannhill diocese, where he served until 1989 under the guidance of Fr Bernard Ngidi CMM. Fr Jwara’s enthusiasm for pastoral work was prematurely cut short in 1989 when the leadership of his congregation sent him to England to do a formation course. He recalled not being pleased with the provincial superior. “I was so unhappy, because I was happy at Impendle, even though the place was very remote. We did not even have electricity, but I was very happy to work with people.” 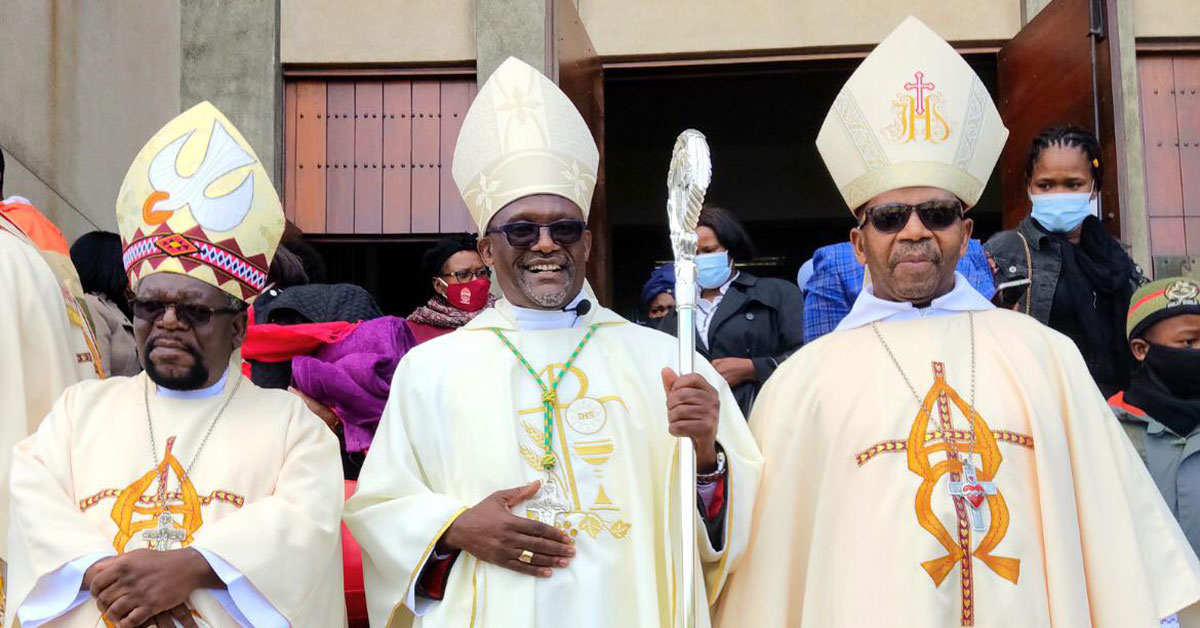 After his training in England, he was appointed novice master in Mariannhill in 1991, and two years later was transferred to Merrivale, Pietermaritzburg, to work as rector at the congregation’s study house, Abbot Francis House. While working as rector, Fr Jwara had the opportunity to study towards a master’s degree in pastoral theology with the University of KwaZulu-Natal’s Pietermaritzburg campus.

In December 1998, Fr Jwara was elected provincial superior of the Mariannhill Missionaries. “I first excused myself because I had just enrolled for my PhD, but one of my senior confreres stood up at the chapter and said, ‘Fr Siegfried, you are still young and you can be our provincial, and then do your studies later’.” So he accepted and served in that position from 1999 till 2002, when the general chapter held in Rome elected him general councillor for the worldwide congregation, with the portfolio of procurator general.

But his term of office was prematurely cut short following the untimely death of the congregation’s general-superior, Fr Dieter Galen, in January 2004. This necessitated an extraordinary elective chapter to choose new leadership. Fr Jwara was then sent to England to do a special course in leadership. In August 2005 he was transferred from the Mariannhill province to that of Mthatha.

A few months later he was elected superior of the Mthatha province. “I was reluctant to accept the election because I wanted to have some break from administration and to focus my energy on pastoral work. But people still voted for me anyway,” the soft-spoken archbishop said. In Mthatha he also served the parishes of Port St Johns and St Patrick’s.

In April 2016 he was appointed bishop of the vicariate of Ingwavuma to succeed Bishop José Luis Ponce de León, who had been transferred to Eswatini. The timing of the nuncio’s call to inform him of that episcopal appointment is poignant: on that day, his parents were celebrating their 60th wedding anniversary — and it was exactly 60 years after Fr Schultis made his prophecy! Archbishop Jwara attributes all his achievements to Fr Schultis’ prayers and interventions.  He also acknowledges the support and inspiration he had received from some of the CMM priests, such as Fr Francis Xavier von Quadt, who was his parish priest at Himmelberg, and Frs Damian Weber and  John Bouma, who were his provincial superiors at different times in his formation.

He did not expect to be appointed archbishop of Durban, but Archbishop Jwara sees the significance of becoming the first Zulu-speaking archbishop to head the archdiocese. He naturally expects his tenure in Durban to be a different experience from that in rural Ingwavuma.

Durban is a metropolitan archdiocese and a melting pot of all races, cultures and dynamics, Archbishop Jwara noted. “I hope to learn more from the people so that I can effectively navigate through existing dynamics.”

When he was a provincial superior, he had the opportunity to lead a province that predominantly comprised white expatriates from Germany, Austria, the Netherlands, and Switzerland, with very few African confreres. “Such a background, coupled with my experience of having lived in Rome and England, will help me understand the racial complexities of the archdiocese.” Moreover, his experience of growing up among the Indian community of Umzinto will also help him interact with the people of the archdiocese, he added.

For the Mariannhill Missionaries, Archbishop Jwara’s appointment to Durban is a cause for joy as well as prayer for their confrere. Provincial superior Fr Bheki Shabalala told the new archbishop: “We are fully aware of the challenges and the mammoth task linked to the assignment entrusted to you. As a congregation, we pray to God, through the intercession of [the martyr] Bl Fr Engelmar Unzeitig CMM, to continue to guide and illuminate your path, thus allowing you to graciously lead the flock entrusted to you.”

In his leisure time, Archbishop Jwara enjoys playing music. “I love playing the organ as a form of relaxation after a busy day.” He also loves to garden, particularly growing vegetables. And he enjoys reading books on human developmental psychology, as these help him to understand people better. “It helps not to judge people. One needs to understand why some people behave in the manner they do,” said Archbishop Jwara.