Pope: Being ‘different’ must never lead to exclusion, discrimination 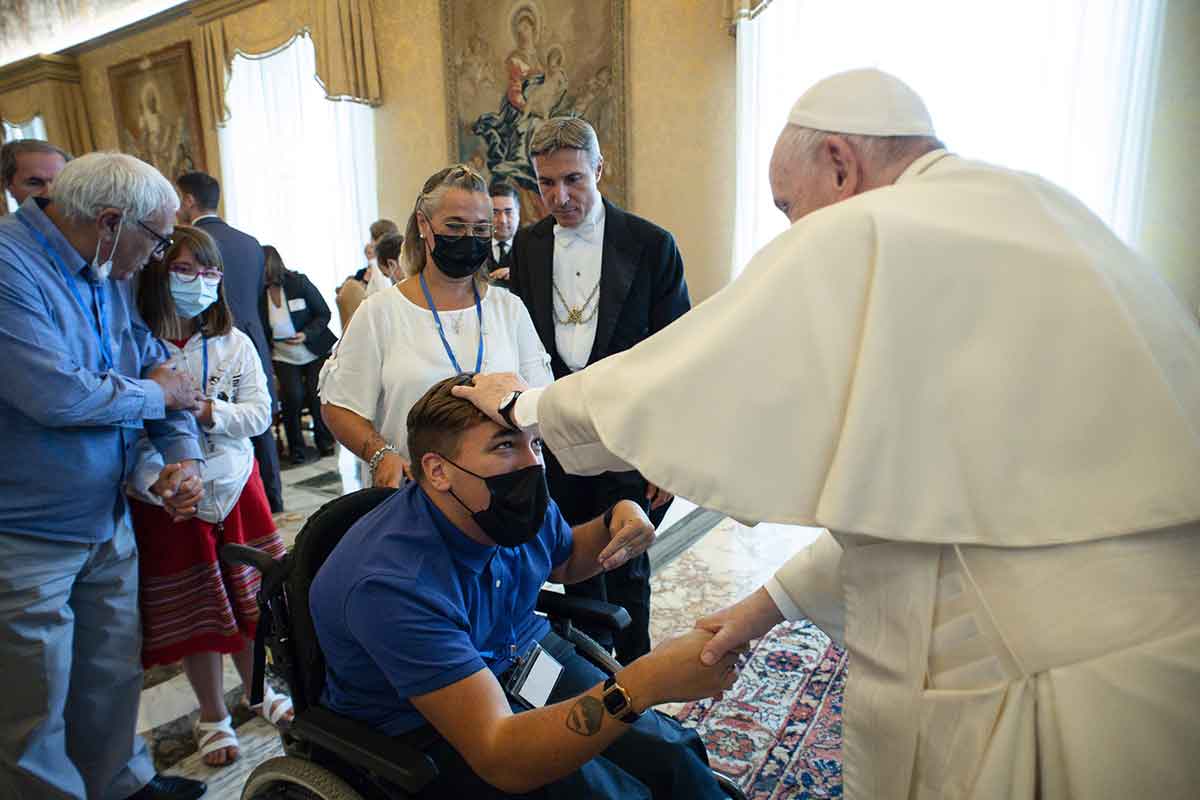 Pope Francis greets a man in a wheelchair during an audience with members of the “Foi et Lumière” movement at the Vatican on Oct. 2, 2021. Everyone, but especially the least and most fragile, is loved by God and has a place in the church and the world, the pope told members of the movement. (CNS photo/Vatican Media)

By Carol Glatz – Everyone, but especially the least and most fragile, is loved by God and has a place in the church and the world, Pope Francis told a Catholic movement that works with individuals with intellectual disabilities and their families.

The existence of the movement, “Foi et Lumière” (Faith and Light), is prophetic, the pope said, because “often the most fragile people are discarded, considered useless.”

“Your prophecy is even more important today to combat the throwaway culture and to remind everyone that diversity is a richness and must never become a reason for exclusion and discrimination,” he said in his speech to the group at the Vatican on Oct. 2.

Founded 50 years ago during a pilgrimage of people with intellectual disabilities, their friends and family to Lourdes, the “Faith and Light” movement and their communities are present in many countries on five continents today, the pope said.

The movement carries “a message of love and welcoming,” which is the core of the Gospel message, he said. “It reminds us that every person, even and especially the least and the most fragile, is loved by God and has a place in the church and in the world.”

The movement’s work with people of different Christian denominations shows the ecumenical nature of their journey, he said. Precisely the most fragile people are those who become a source of “reconciliation because they call us all to a journey of conversion.”

Despite all the work they have done, the pope said, there are still, in many parts of the world and the church, “many, who in their littleness and fragility, are forgotten and excluded.”

The pope encouraged the “Faith and Light” communities to “always be places of encounter, human development and celebration for all those who still feel marginalised and abandoned.”

And, he added, “may you be a sign of hope for families who experience the birth of a child with a disability, so that no one will be closed in on themselves in sadness and despair.”