By Carol Glatz –  High-level representatives of the world’s religions came together with Pope Francis at the Vatican to show their joint commitment to caring for the Earth and to appeal to world leaders to deepen their commitments to mitigating climate change.

To the strains of Antonio Vivaldi’s “The Four Seasons” and surrounded by potted greenery and the colourful frescoes of the Hall of Benedictions, nearly 40 faith leaders signed a joint appeal that Pope Francis then blessed and gave to Alok Sharma, president-designate of COP26, and to Luigi Di Maio, Italy’s foreign affairs minister.

“Future generations will never forgive us if we miss the opportunity to protect our common home. We have inherited a garden: We must not leave a desert to our children,” said the written appeal, signed Oct. 4, the feast of St. Francis of Assisi, patron saint of ecology.

The appeal urged world leaders, who will meet at the 26th U.N. Climate Change Conference of Parties – COP26 – in Glasgow Nov. 1-12, “to take speedy, responsible and shared action to safeguard, restore and heal our wounded humanity and the home entrusted to our stewardship.”

The appeal called on nations to: increase their levels of commitment and international cooperation; meet net-zero carbon emissions as soon as possible as part of efforts to mitigate rising global average temperatures; step up climate action at home and financially assist more vulnerable countries in adapting to and addressing climate change; increase their transition to cleaner energy and sustainable land use practices; and promote environmentally friendly food systems and the rights of indigenous peoples and local communities.

The religious leaders also pledged that they themselves would promote ecological education; advocate for a “change of heart” in their own communities concerning caring for all of creation; encourage sustainable lifestyles; take part in public debates on environmental issues; and support “greening” their institutions, properties and investments.

They symbolically marked their personal commitment by pouring a cup of soil onto a potted olive tree that will be planted in the Vatican Gardens.

The representatives took to the floor with a brief speech, commentary or declaration, with many detailing what their faith tradition teaches about the moral imperative of caring for humanity’s common home. At the end of the ceremony, recorded messages and appeals were played from those religious leaders that could not attend the event due to pandemic restrictions.

Saying he wanted to leave more time to hear from everyone, Pope Francis chose to skip reading his speech aloud since everyone had a written copy. 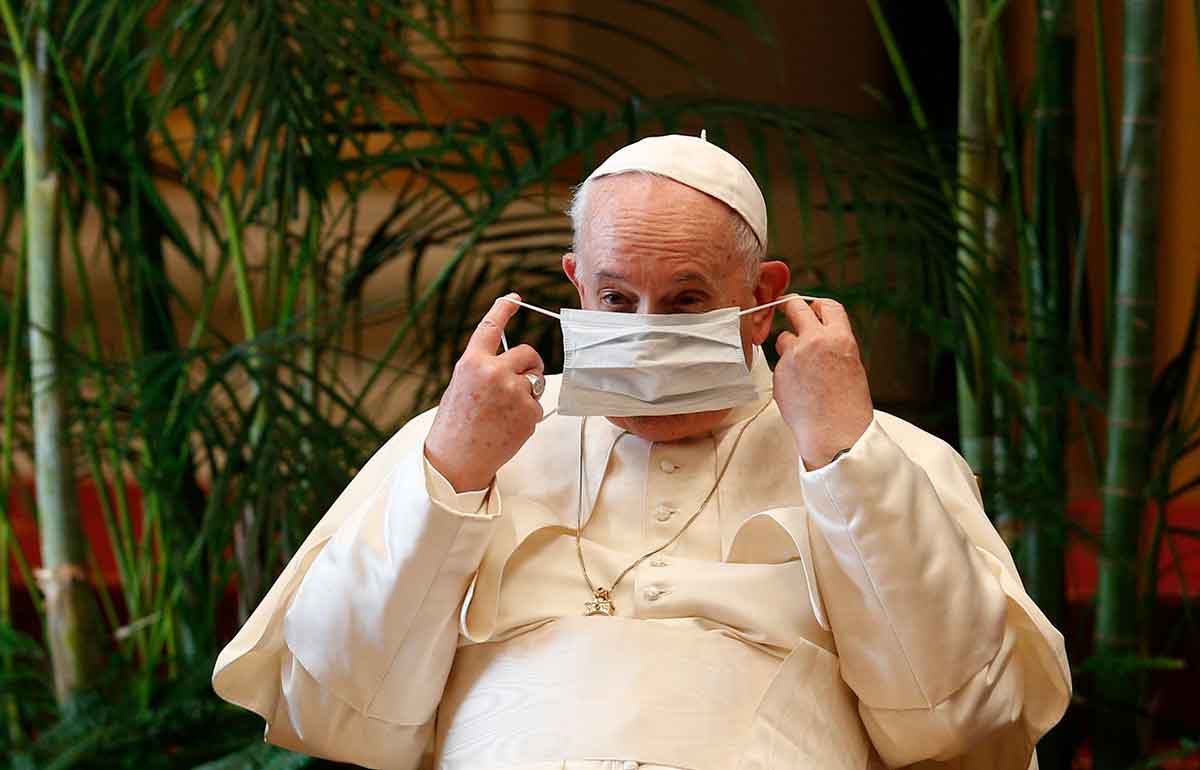 Pope Francis puts on his mask during the meeting, “Faith and Science: Towards COP26,” with religious leaders in the Hall of Benedictions at the Vatican Oct. 4, 2021. The meeting was part of the run-up to the U.N. Climate Change Conference, called COP26, in Glasgow, Scotland, Oct. 31 to Nov. 12, 2021. (CNS photo/Paul Haring)

In the full text, the pope said COP26 “represents an urgent summons to provide effective responses to the unprecedented ecological crisis and the crisis of values that we are presently experiencing, and in this way to offer concrete hope to future generations.”

He proposed “three concepts” to guide their joint efforts: “openness to interdependence and sharing; the dynamism of love; and the call to respect.”

“Recognising that the world is interconnected means not only realising the harmful effects of our actions, but also identifying behaviours and solutions to be adopted, in an attitude of openness to interdependence” and sharing the responsibility and ways to care for others and the environment, he wrote.

Religious and spiritual traditions can help promote love, which “creates bonds and expands existence, for it draws people out of themselves and toward others,” especially the poor, he wrote.

Faith traditions, he said, can help break down “barriers of selfishness,” counter today’s “throwaway culture” and combat the “seeds of conflict: greed, indifference, ignorance, fear, injustice, insecurity and violence,” which harm people and the planet.

“We can face this challenge” with personal examples, action and education, the pope wrote.

Finally, the pope wrote, there must be respect for creation, respect for others, “for ourselves and for the creator, but also mutual respect between faith and science.”

Respect, he wrote, is “an empathetic and active experience of desiring to know others and to enter into dialogue with them, in order to walk together on a common journey.”

The meeting, “Faith and Science: Toward COP26,” was organised by the embassies of the United Kingdom and Italy to the Holy See, together with the Vatican. The U.K. and Italy were co-chairing the summit in Glasgow, where parties from 197 nations are meant to find agreement on how to tackle the threat of climate change.

The appeal of religious leaders and scientists came after months of dialogue and agreement that there is a common moral duty to tackle climate change.

The COP26 co-chairs wanted to include the voices of religious leaders given the moral and ethical imperative of environmental protection, but also because of their global reach and authority as they represent an estimated 84% of the world’s population who identify with a faith.