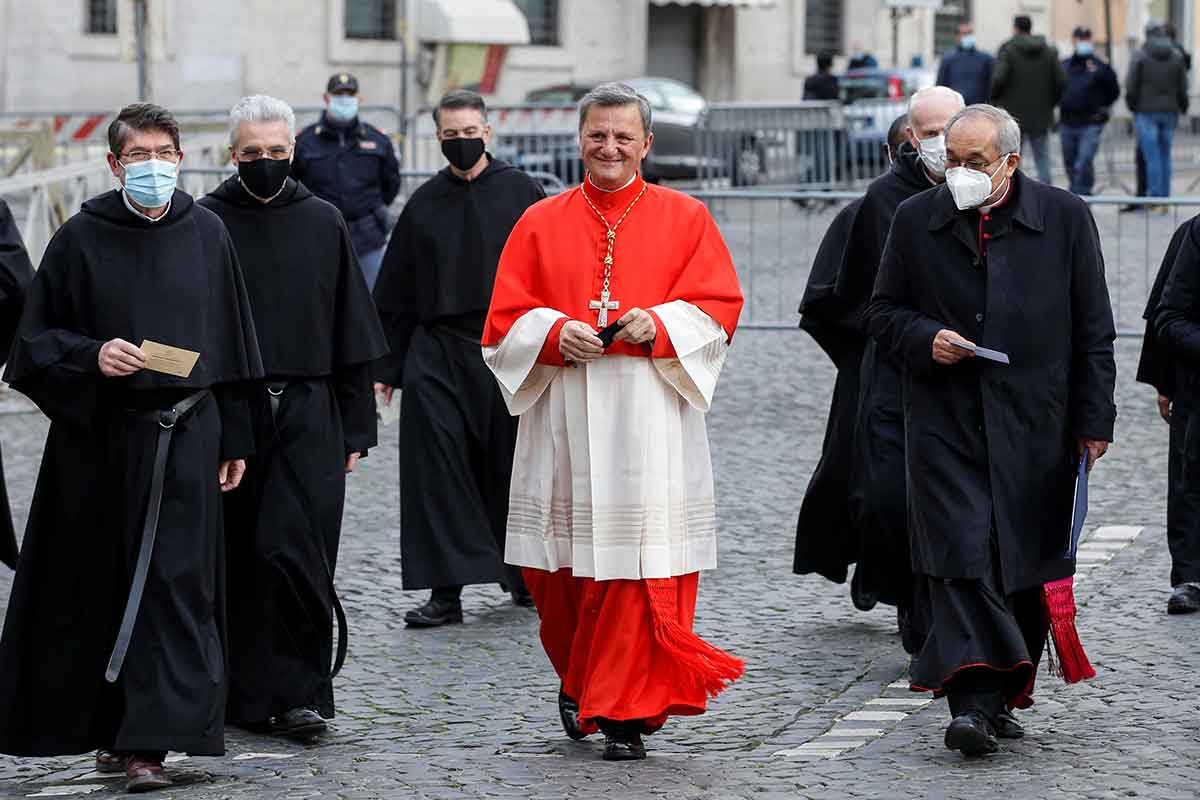 Cardinal Mario Grech of Malta arrives for a consistory in St. Peter’s Basilica at the Vatican in this Nov. 28, 2020, file photo. Cardinal Grech told reporters that a synodal process is not a competition, but an exercise of listening to the Holy Spirit. (CNS photo/Fabio Frustaci/pool via Reuters)

By Cindy Wooden – From Australia’s Plenary Council, Archbishop Mark Coleridge of Brisbane tweeted, “Our small group facilitator was for years a midwife, and she says the process is like giving birth: slow, painful, messy, but in the end fruitful and joyful.”

The Australian council, which was holding its first assembly Oct. 3-10, is one example of large “synodal” processes taking place around the world.

And the Vatican expects the process to be similar to what Archbishop Coleridge experienced: “slow, painful, messy, but in the end fruitful and joyful.”

In fact, a section of the “vademecum,” or handbook, prepared by the Vatican synod office to guide the two-year preparatory process has a section titled, “Avoiding Pitfalls.”

Synodality “is an open path – you don’t know in advance where it will go, and it can be messy,” Xavière Missionary Sister Nathalie Becquart, one of two undersecretaries of the synod, told participants at a Rome meeting sponsored by the Leadership Roundtable. Especially bishops, who are called to guide the process in their dioceses, “need to learn to let go, but at the same time, to take responsibility when needed” to get the process back on track.

At the same time, she said, “truly, the best way to help people understand synodality is to give them a good, true experience of synodality.”

Presenting the vademecum Sept. 7, Cardinal Mario Grech, secretary-general of the synod, told reporters that a synodal process is not a competition in which “whoever is stronger influences or subdues the other; a synod is an experience, an exercise of listening to the Holy Spirit in listening to one another.”

“Reducing the synod to the usual debated questions is to distract the synod,” the cardinal insisted, although no one expects the listening sessions to exclude questions such as: the role of women in the church; clericalism and the exercise of authority; child protection and care for survivors of clerical sexual abuse, and many others.

Responding to a question about whether the Vatican is worried about the “Germanisation” of the synodal process – apparently referring to the hot-button issues that came up in Germany’s Synodal Path – Father Dario Vitali, a professor of ecclesiology at Rome’s Pontifical Gregorian University and a consultant to the synod, told reporters that since the contexts in which Catholics live are different, the questions and concerns they raise will be different, too.

“All of them must be listened to, and you cannot predict what the result will be,” he said, adding that the openness to universality to which all Catholics are called “is not a levelling, but a welcoming of diversity.”

With every Catholic invited to participate in diocesan listening sessions over the next six months, the vademecum not only provides suggestions for how to organize groups and encourage involvement, but it also explains the kinds of attitudes participants should have in order to make the process fruitful.

In a process calling everyone to get involved, it reminds them that “everyone can grow in understanding through dialogue.”

The document identified nine specific “pitfalls” that could prevent participants from hearing the Holy Spirit and one another:

— “The temptation of wanting to lead ourselves instead of being led by God.”

— “The temptation to focus on ourselves and our immediate concerns,” rather than broadening perspectives and making a real effort to listen to the concerns of the people on the margins of the life of the church or of society.

— “The temptation to only see ‘problems,'” which depresses people and ignores the fact that the Holy Spirit is at work in the church today.

— “The temptation of focusing only on structures,” which are important only insofar as they “foster deeper communion, fuller participation, and more fruitful mission.”

— “The temptation not to look beyond the visible confines of the church” for signs of where God is at work in the world and where God is calling the church to be more involved.

— “The temptation to lose focus of the objectives of the synodal process,” which is to discern “how God calls us to walk forward together.”

— “The temptation of conflict and division,” particularly “through pressure” or trying “to discredit those who feel differently.”

— “The temptation to treat the synod as a kind of a parliament.”

— “The temptation to listen only to those who are already involved in church activities,” which would mean ignoring a significant portion of those who are baptized.

In an interview published in the October edition of the Vatican newspaper’s women supplement, Sister Becquart said that “in our very individualistic societies we often lose sight of the community and ecclesial dimension of our faith,” dimensions that are expressed and strengthened through synodality.

“Today it is as if we are in a phase of relearning synodality,” she said. “Synodality that was present at the dawn of the church, but we cannot simply copy and paste,” even if that sounds like the neatest way to proceed.