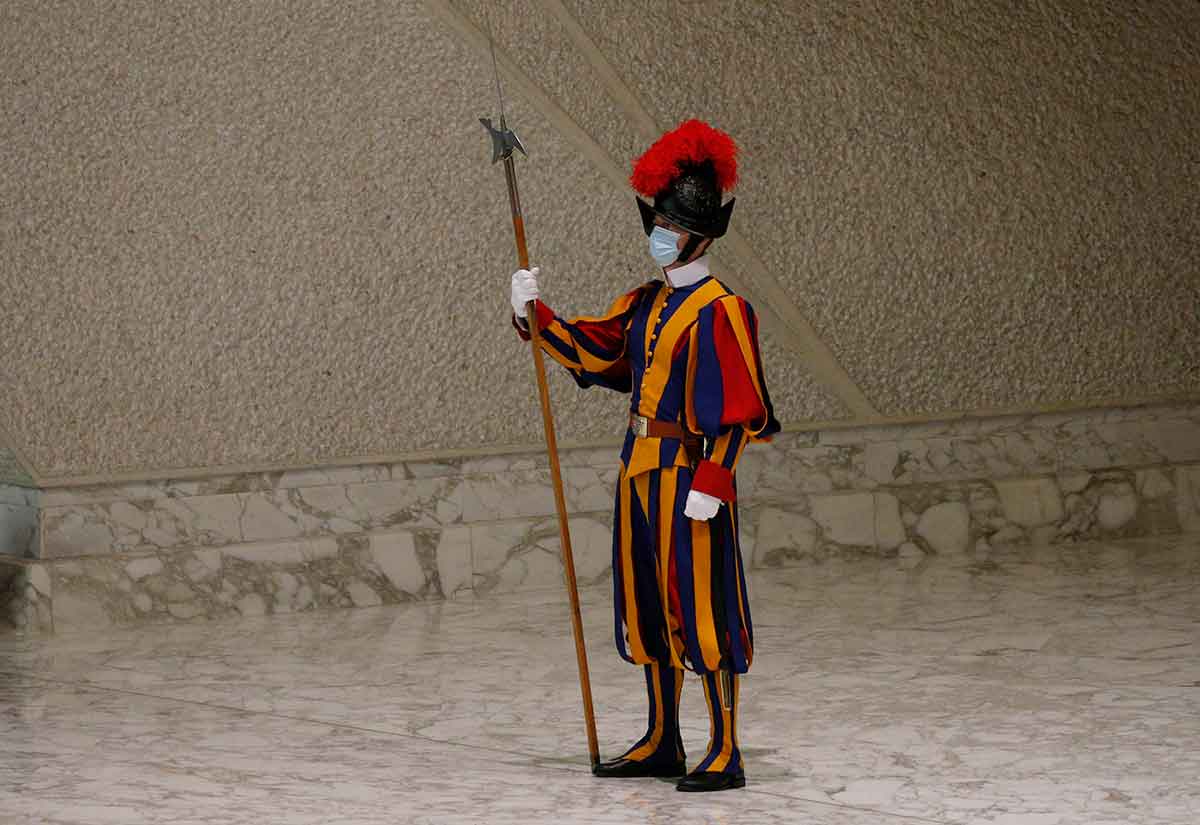 A Swiss Guard is pictured before Pope Francis’ general audience in the Paul VI hall at the Vatican on Sept. 22, 2021. Three members of the Swiss Guard have hung up their halberds rather than be vaccinated against Covid-19, and three others were temporarily suspended in early October for not completing the vaccination cycle, the spokesman for the guards told a Swiss newspaper. (CNS photo/Paul Haring)

By Cindy Wooden – Three members of the Pontifical Swiss Guard have hung up their halberds rather than be vaccinated against Covid-19, and three others were temporarily suspended in early October for not completing the vaccination cycle, the spokesman for the guards told a Swiss newspaper.

Lt. Urs Breitenmoser, the spokesman, told Tribune de Genève that the three who left did so voluntarily.

Mandatory vaccination for those serving in the military, he said, is “a measure in line with those adopted by other armed corps around the world.”

While the Vatican has not made vaccination obligatory for all employees, beginning Oct. 1 anyone – employees and tourists alike – who wanted to enter Vatican territory was required to show either proof of vaccination, of recovery from Covid-19 or a negative Covid-19 test taken within the previous 48 hours.

Without one of the three, employees are not allowed to work and will not be paid unless they have a note from a physician explaining why they could not be vaccinated.

Proof of vaccination or a negative Covid-19 test is not required to attend a liturgy in the Vatican or to enter St. Peter’s Square for the Sunday recitation of the Angelus.

The Pontifical Swiss Guard counts just over 100 men, all of whom are Swiss, Catholic and previously served in the Swiss army. They are responsible for guarding all entrances into Vatican City State as well as keeping watch over the pope and his residence in the Domus Sanctae Marthae. They also provide security and ceremonial services during liturgical events and the visits of heads of state and other dignitaries to the Vatican.

A dozen members of the corps tested positive for Covid-19 in October 2020. Because of their daily interaction with the pope, elderly cardinals and the general public, members of the Swiss Guard were among the first people in the Vatican to be offered the vaccine in January, when the Vatican began offering it to employees.